Home » Our Veterans » News » New friends made at cribbage championships

New friends made at cribbage championships 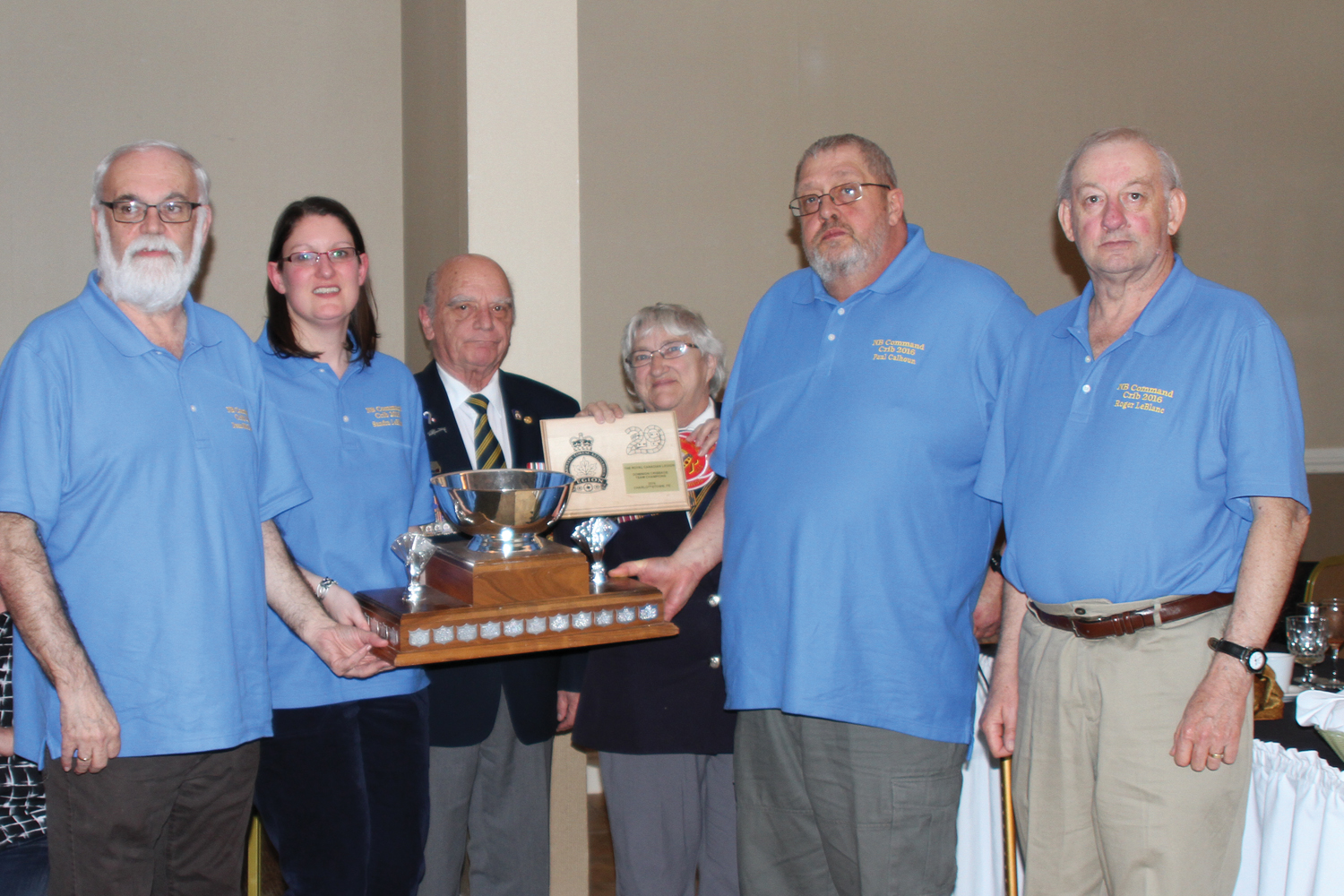 Players in the Dominion Command Cribbage Championships in Charlottetown April 22-24 got a demonstration of just how far Prince Edward Islanders will go to make visitors happy.

Tony Safronetz from Grandview Branch in Manitoba mentioned that he would like to take some of the island’s rich, red earth home as a souvenir. The next morning Jason Barlow and Cory Milligan of Souris, P.E.I., Branch went out—in the rain—to find a farmer’s field and fill a Baggie with this unusual memento.

“It’s great to meet new people,” said Milligan, who met Safronetz for the first time at the tournament. “It makes things a little more enjoyable, meeting other people from across the country and hearing their stories.”

Charlottetown Branch President Jim Ross welcomed the 56 players from across the country during opening ceremonies. “Congratulations to you for being here—you have all earned it.”

After a short captains’ meeting, doubles and singles play began simultaneously. Play was in round-robin format with each team playing nine rounds of two legs each. One point was awarded for each win, two for a skunk (not passing the three-quarters mark) and three for a double skunk (not passing the half-way point).

Skunks propelled Nova Scotia’s Bob Brenton, of Colchester Branch in Truro, well ahead of the pack in rounds four and five of the singles tournament. He managed only four points in the next four matches and was beaten twice by Elaine Dubeau of Montcalm Memorial Branch in Rawdon, Que., in the final match.

Meanwhile, B.C./Yukon’s Jake McDougall, of Vedder Golden Branch in Vedder Crossing, behind by three points at the end of round five, managed to score seven points, tying Brenton at 13 and forcing a playoff. “This last game I was getting unbelievable hands. I had a 24 hand—that’s three of them today. It makes it hard for your opponent to come back.”

Brenton, a newbie at the nationals, won the playoff. He’s been playing cribbage since he was seven years old, when his father received a deck of cards and a cribbage board in the shape of a 29, a novelty at the time, for Christmas.

The doubles championship featured an exciting and convoluted battle for first and second place. Going into the final round, B.C./Yukon’s Barry Dillon and Richard Falle, of Prince Edward Branch in Victoria, were in the lead with 19 points, while New Brunswick’s Paul Calhoun and Sandra LeBlanc of Marysville Branch in Fredericton, were tied at 17 with Manitoba-Northwest Ontario’s George Lobert and Safronetz of Grandview Branch. 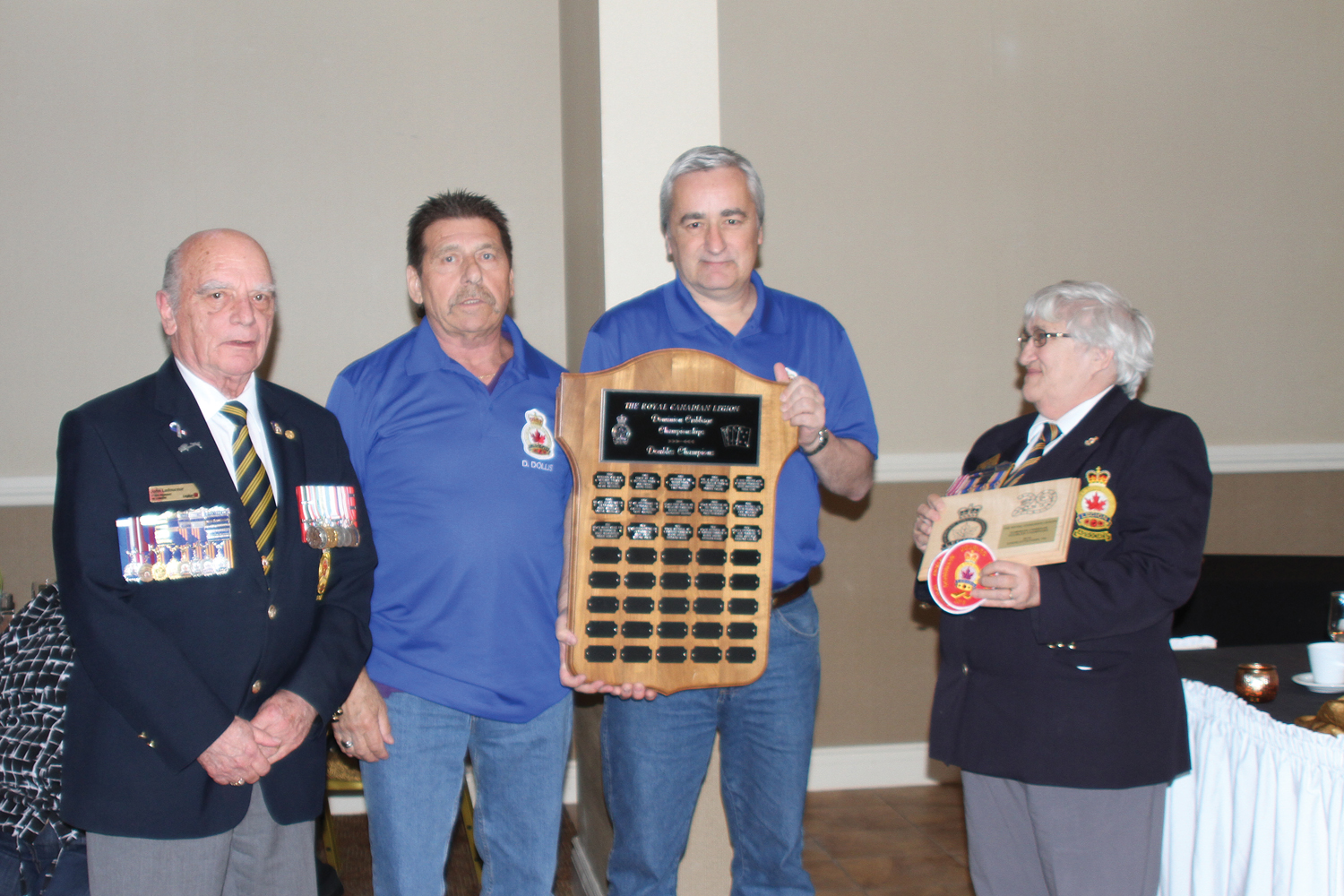 Safronetz and Lobert, who have played together for nearly 10 years and in many provincial championships, had gotten to that position by some very good luck. “We had a skunk and then a double skunk,” in round eight, against Quebec’s Kathleen Bertrand and Carole Archambault of Montcalm Memorial Branch, said Safronetz. “In the first game, the Quebec team just wasn’t getting the cards, and in the second game we were getting exceptional cards. If you get two 20 hands, that scoreboard becomes very long for your opponents.”

By chance, the team from Manitoba-Northwestern Ontario—Safronetz and Lobert—was facing the B.C./Yukon team in the final round, and if luck delivered them more skunks, they might walk away with first. But luck was not with them, and B.C./Yukon’s Dillon and Falle, who won the doubles titles in 2013 and 2014, won the title again.

The New Brunswick team placed second in doubles—but still had a shot at taking a title home, for they would also play in the team tournament Sunday. Half the commands sent one team to the championships, from which the single and doubles players were chosen. Manitoba-Northwestern Ontario, B.C./Yukon, Saskatchewan, Newfoundland and Labrador and Prince Edward Island sent provincial winners in each category.

The teams, divided into A and B sides, played simultaneously in the round robin. The crowd around the scoreboard grew throughout the day as spectators and players between rounds gathered to mentally add and compare scores.

Some players did not follow the score—some for fear of jinxing their game, others because it was too difficult to keep track of ever-changing standings.

“Are you sure we got first?” a surprised Dean MacLauglin said after the New Brunswick team sewed up the championship. The highlight of his day was the last game. “We got a skunk and it was just what we needed.”

But the win was particularly gratifying for father-and-daughter duo Paul Calhoun and Sandra LeBlanc. “It is my first time at nationals and I knew it was a three-way tie at one point. Dad’s been teaching me since I was a little girl, but this is the first time I’ve played with him in competition. He didn’t think we were going to win.”

And it was doubly gratifying for her father. “This is my fifth dominion championships,” said Calhoun. “I won once and have come second every other time.” 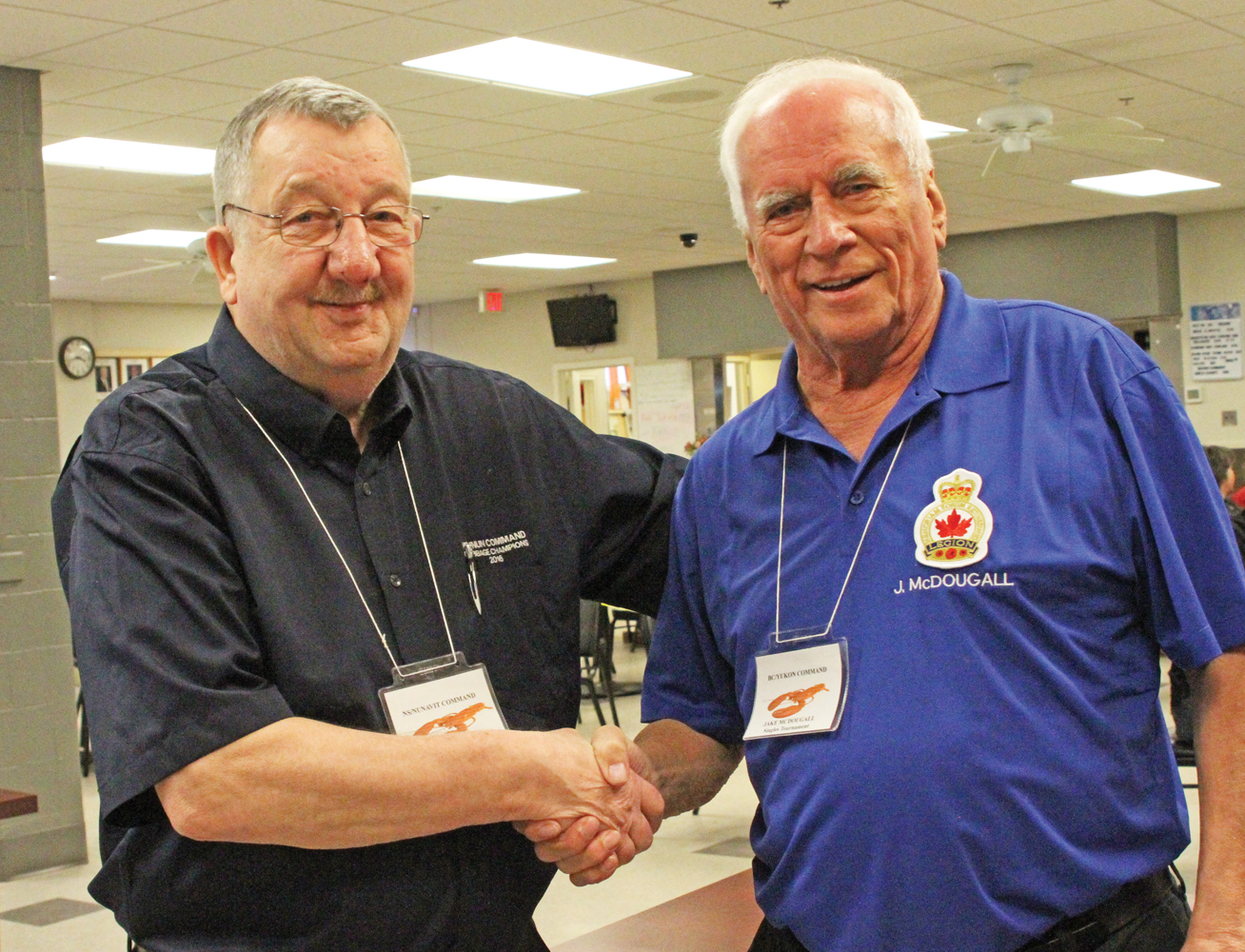 A skunk in the final leg left the Nova Scotia team, Stu Hardy, Jim Lynk, Bob Brenton and Connie Whitlock of Colchester Branch in third place behind Manitoba-N.W.O.’s Harvey Dunville, Carl Sodergren, Dave Fall and Robert Ritchie of Red Rock, Ont. Branch. Fall had a 28-point hand, one point shy of a perfect score. “It’s amazing,” he said, with an ear-to-ear grin. “I’ve been playing since I was 12 and had only one 29 before.”

Praise was lavish at the open microphone for the volunteer drivers, organized by Pat Doyle.