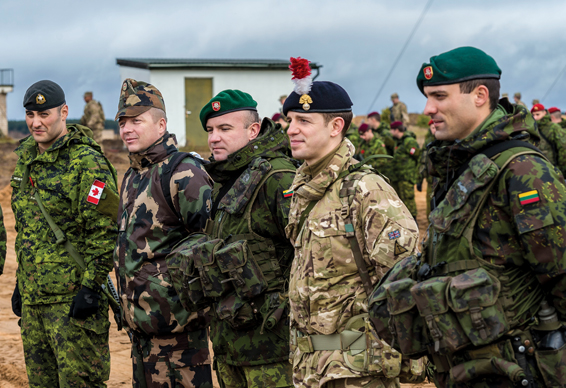 With the chaos in Syria continuing to spill out across the world, it’s quite easy to overlook Russia’s recent behaviour, the unusual and worrying aggression it has displayed not only against its neighbouring countries but elsewhere. While the world’s attention may have shifted to Syria, the North Atlantic Treaty Organization coalition is still tracking President Vladimir Putin’s moves and is doing its best to deter him from doing something even more dangerous. Besides filling Eastern Europe with NATO troops and hardware, the alliance recently held its largest-ever training exercise. Nearly 36,000 troops from 28 allies and nine partner nations converged on Italy, Spain and Portugal this fall for Trident Juncture. It was a truly massive show of force.

“I think the message that must be conveyed,” said Spanish Lieutenant-General Rafael Comas, commander of the new NATO Rapid Deployment Corps, “is that we’re training to win, to overcome any enemy that wants to attack our way of living, our people, our territory, our understanding of the world.”

John Gallagher was a 32-year-old Canadian, a former member of the Canadian Armed Forces, who volunteered to fight against ISIS in Iraq and Syria. He was killed in October. Beyond being a soldier though, Gallagher was also a serious student of international affairs with a compelling argument for joining the fight in the Middle East—and no illusions about what doing so might cost. In an essay he wrote called “Why the war in Kurdistan matters,” Gallagher noted, “I’m prepared to give my life in the cause of averting the disaster we are stumbling towards as a civilization.”

What follows is a small portion of Gallagher’s essay, now made perhaps even more poignant by the terror attack in Paris.

“First, let me get the obvious out of the way: I do not expect anyone to agree that it is a wise course of action to volunteer to fight against ISIS.

“I also respect the viewpoint that the last thing any Westerners ought to do is get involved in another Middle Eastern conflict. We’ve already done tremendous damage to the region; the rise of ISIS is a direct result of foreign policy blunders by the last two presidents (at least!). If you think that for the good of the region we should all sit this one out, I can understand that. But I can’t agree.

“For decades now, we have been at war. This war has been unacknowledged by our leaders, but enthusiastically proclaimed by our enemies. This war has produced casualties on every continent, in nearly every nation on Earth. It has had periods of intense fighting, followed by long stretches of rearming and regrouping, but it has never ended. It is not even close to being won.

“We are all on the front lines of this conflict, whether we know it or not. We can measure the causalities not only in the body counts of deadly terror attacks, mass demonstrations, embassy assaults and assassinated artists. We can also measure it in the terror produced among cartoonists, satirists, publishers and booksellers, news media and educators, who are being prevented from doing their necessary work of maintaining the machinery of the enlightenment. Not only have we all been threatened; in many ways we are all already casualties of this war.”

A soldier as minister

With the change of government in Ottawa, it’s become clear that the Canadian Armed Forces are in for some new directions from their political masters, starting with new Minister of National Defence, Harjit Sajjan. While in the past it wasn’t particularly unusual for a defence minister to have formerly served in the forces, Sajjan breaks new ground as he’s perhaps the first minister ever installed while still being in the forces, which would have put him in the unusual situation of being a subordinate to Chief of the Defence Staff Jonathan Vance. Sajjan, who was a lieutenant-colonel in the reserves, obtained his release quite quickly after taking office.

During Sajjan’s three tours in Afghanistan, he served closely with Vance as an advisor in an intelligence role, helping to map out the complex web of the insurgency. Sajjan also served a tour in Bosnia and received the Meritorious Service Medal and the Order of Military Merit, as well as Mentioned-in-Dispatches.

Beyond ending Canada’s bombing mission in Iraq and pulling us out of the F-35 fighter jet program, Sajjan has been directed by Prime Minister Justin Trudeau to create a new defence strategy for Canada, a project that has been needed for some time.

While nothing is certain, it’s widely expected that Canada will be looking to get involved in more peacekeeping missions in the near future, and Trudeau’s mandate letter to Sajjan reflects that, noting that the new minister is to “work with the Minister of Foreign Affairs to renew Canada’s commitment to United Nations peace operations. This includes: making Canada’s specialized capabilities—from mobile medical teams, to engineering support, to aircraft that can carry supplies and personnel—available on a case-by-case basis.”

In a sign that veterans everywhere will undoubtedly cheer, Sajjan was also directed “to reduce complexity, overhaul service delivery, and strengthen partnerships between National Defence and Veterans Affairs,” as well as to “develop a suicide prevention strategy for Canadian Armed Forces personnel and veterans.”

While the tasks ahead of Sajjan are daunting, his conduct during his tours in Afghanistan suggest he’s probably capable of handling whatever comes his way. After his tour in 2006, Sajjan’s performance was thoroughly cheered by his then-boss, Brigadier-General David Fraser.

“Not only did [Sajjan] display a rare high level of intellect and experience in his analysis, he also demonstrated remarkable personal courage…often working in the face of the enemy to collect data and confirm his suspicions, and placing himself almost daily in situations of grave personal risk,” said Fraser. “[He] demonstrated a profound understanding of the Taliban and tribal networks….

“He was the best single Canadian intelligence asset in theatre, and his hard work, personal bravery and dogged determination undoubtedly saved a multitude of Coalition lives,” concluded Fraser. “I rate him as one of the best intelligence officers I have ever worked with.”

Discover the countless wonders of our country in this large-format, 100-pg special edition packed with photos and stories. Includes a touching intro by comedian and writer Cathy Jones. Order your copy of O Canada: Discover your land today! #Canada #Nature

PrevPrevious ArticlePilgrimage to Turkey: Going back to Gallipoli
Next ArticleHistoric Victoria Cross Photo – Troops in a trenchNext