During a whirlwind visit to Cornwall, Ont., in mid-August, students from France took advantage of every opportunity to greet and thank Second World War veterans and shower them with Gallic double kisses.

“It was a treat to meet the veterans, a duty to honour them,” said Adélaide Caillet, one of about three dozen young people from Normandy on a commemorative pilgrimage to Canada with Westlake Brothers Souvenir Association. “We owe them our current life.”

The association promotes remembrance of Canadians who helped to liberate Normandy, then the rest of France, from the Nazis during the Second World War among Norman youth. It is named for Toronto brothers George, Albert and Thomas Westlake, who died within days of each other shortly after D-Day in June 1944. George died in the bloody battle at Authie on June 7, Albert and Thomas on June 11 at Le Mesnil-Patry, side by side at the same gun. All three are buried at Bény-sur-Mer Canadian War Cemetery, about four kilometres from Juno Beach.

This was the third student pilgrimage to North America since the association was formed in 2006. Once back in France, the members of Westlake Brothers Souvenir will continue their tradition of organizing ceremonies on home soil, explained founder Christophe Collet. Since 2006, students have organized some 200 ceremonies, including 32 in honour of the 70th anniversary of D-Day in 2014.

For this month-long pilgrimage, the students held some 20 commemorative ceremonies in Quebec and Ontario communities, including one at the National War Memorial in Ottawa. Over the month, they planned to read the names of the nearly 47,000 Canadian soldiers who died in the Second World War. 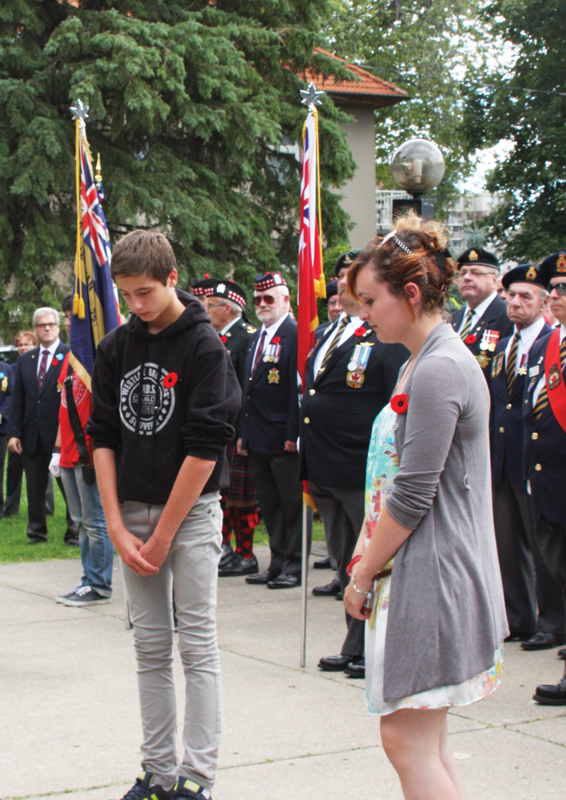 On this day, they are hosted by the Stormont, Dundas and Glengarry Highlanders Regiment (also known as the Glens), which is headquartered in the Cornwall Armoury, and John McMartin Memorial Branch of The Royal Canadian Legion.

Their visit began at the armoury, where, in Normandy Hall, they spotted a historic D-Day photo of the Glens debarking onto the beach at Bernières-sur-Mer. They gathered around, pointing and excitedly talking.

Their hosts were pleased to see them drawn to that photo, said Jim Brownell, the regiment’s honorary lieutenant-colonel. “You see, we were indeed at Normandy,” he said during a ceremony at which the association was presented with photos, artwork and memorabilia.

“We usually ship students in our community across the ocean to your country,” he said. “We consider your country almost as a shrine. It’s wonderful for you to be here.”

Their excitement and eagerness to learn resurfaced when the students toured the Stormont, Dundas and Glengarry Highlanders Regimental Museum, and stopped to examine Gregory Pollard’s exhibit of the score of Canadian prisoners who were murdered at Abbaye d’Ardenne, including his uncle, Lance-Corporal George Pollard.

At a commemorative service at the cenotaph, students sang, shared readings and placed a wreath, along with George O’Dair, former Dominion vice-president and president of the Glens’ Association, John McMartin Memorial Branch President Linda Fisher, Brownell and Mayor Leslie O’Shaugnessy.

Several students spoke, recalling the Canadians killed and wounded “in the time of fire and iron,” when scared men “followed orders straight to the cemeteries” for the freedom of France. “We must remember to live a life with dignity, mindful of the sacrifice…(of those) in Norman cemeteries.”

The students’ participation “means a lot to us because it shows that the young people are still remembering,” said branch Past President Ken Heagle.

Students delighted in the costumed town crier proclaiming the opening of Veterans Walk, a joint project between John McMartin Memorial Branch and the city, and took the inaugural steps with veterans, following the colourful banners linking the cenotaph to the branch.

“Yes, we do remember (veterans) on Nov. 11 and we honour them, but now when we drive down this section of Second Street, we’re going to remember them every day,” said Heagle.

At the branch, students helped unveil a Howitzer that will be displayed on branch grounds, its plaque detailing the history of the gun, and a final phrase: “May The Guns Stay Silent.”

Then students were treated to a luncheon with Second World War veterans, including D-Day veterans Rudy Roy and Walter Solly, who sat at the table with Caillet. “My French is pretty limited,” said Solly, but the students and veteran managed to have a conversation, the language of the heart taking over when foreign vocabulary failed.