The camaraderie was amazing and the darts were flying at Cloverdale Branch in Surrey, B.C., as the branch played host to the Dominion Command Darts Championships on May 1-3. 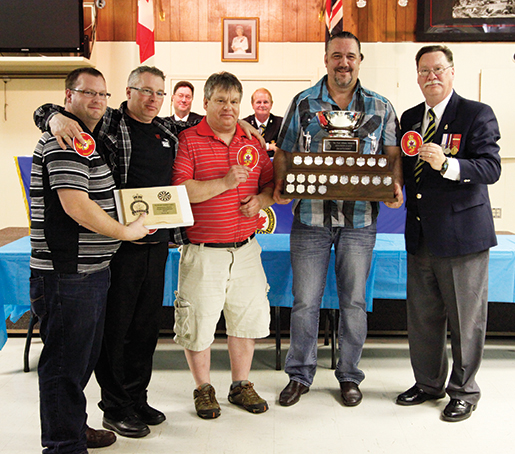 Doubles play started bright and early. Halfway through the competition, Ontario, Manitoba-Northwestern Ontario, New Brunswick and Nova Scotia/Nunavut had already emerged as front-runners, but it was tight.

After five games, the Ontario team of John Verwey and Andre Carman from Blythe, Ont., Branch was out in front with 11 points and the other three teams were tied in second at 10 points.

It stayed close right until the last dart. In the final tally, Ontario ended with 21 points with the East Coast team of Jerry Myles and Chris Steiger from Centennial Branch in Dartmouth, N.S., right behind them with 19.

It was perhaps not a surprise to see Verwey crowned the doubles champion, as he has won the dominion singles championship four times and the team title once. “This is the one I was missing. It was that goal I was missing and now I got it, so it’s extra special,” said Verwey. “And [Carman is] one of my best buddies. So to win with him was pretty special, too.”

With such a winning pedigree at the national level, it seemed natural to ask Verwey to outline the secret to his success. “I don’t pay any attention to the score until it’s all over,” he laughed. “You need them all to win. I know what I’ve got to do and so I don’t need to look at the scoresheet to know I’m under the gun.”

With the doubles wrapped up, the singles event kicked off in the afternoon. Close throughout, the singles competition ended up in a tie, which necessitated a playoff between Darren MacNevin from Charlottetown Branch and Ronald Looker from West Kildonan Branch in Winnipeg in a best-of-three match to decide the dominion champion. 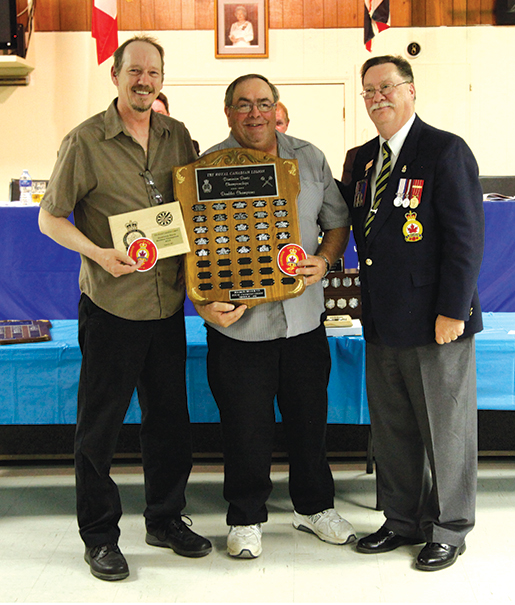 Doubles champs Andre Carman (left) and John Verwey accept their trophy.
Adam Day
In a flurry of darts, the first two games were split one apiece in what seemed like 30 seconds. The last game, however, would not be so fast. Both MacNevin and Looker made it down to the double out with no trouble–meaning they needed just one dart to win–but both players uncharacteristically faltered on multiple attempts. Each had the championship up for grabs several times and missed. In the end, it was MacNevin who hit the double three to win the competition, roaring in joy and relief that it was over.

After a spirited session of barbecuing and dancing at the branch on Saturday night, a huge crowd convened on Sunday morning to fight it out for the big prize, the dominion team championship.

Going into the competition, observers were looking toward Prince Edward Island as a slight favourite, a team which not only had a great deal of experience but also featured MacNevin, the newly crowned singles champion. 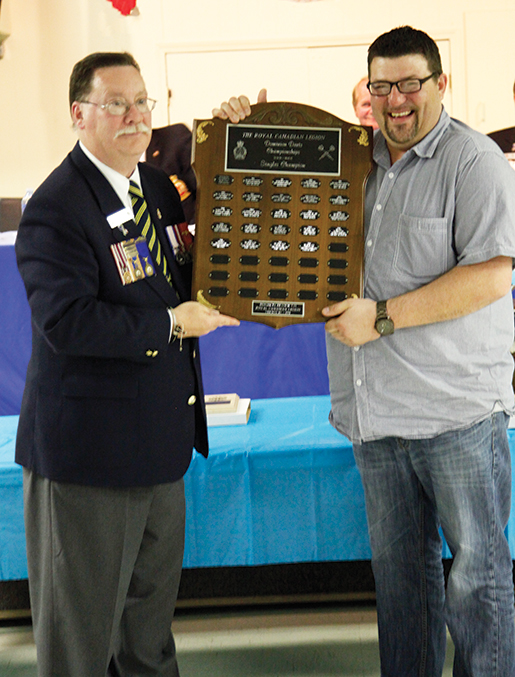 Singles champion Darren MacNevin (right) receives his award.
Adam Day
That was not to be, however, as after seven boisterous rounds of play it was Newfoundland and Labrador in front with a one-point lead over New Brunswick at 15-14. The Nova Scotia/Nunavut team of Jerry Myles, Paul Laquant, Larry Barnes and William Jones had come on strong and was sitting at 13.

After a huge clash in the eighth round between Newfoundland and New Brunswick in which New Brunswick got the better of it, and another great round by Nova Scotia, it turned out there was a three-way tie going into the ninth and final round. The New Brunswick versus Nova Scotia match on board three looked set to answer all the questions. The team from Blacks Harbour, N.B., Branch—Derek Hanley, Scott Tracy, Isaac Mullin and Mark Hebert—raced out to a 2-0 lead against their East Coast rivals and if they could win one more game they’d have the championship.

The loss meant there was a tie between New Brunswick and the Portugal Cove, Nfld., team of Jerry Spurrell, Gary Kavanagh, Mitchel Burt and Patrick O’Grady and a best-of-three showdown to determine the championship.

While the Blacks Harbour team won the first game and had a dart for the championship at the end of the second, they missed and Newfoundland stole the second. With the momentum going into the third, Newfoundland was unstoppable and they charged out of the gate, clinching the dominion victory in a barrage of well-aimed darts.

The resulting celebration was, well, significant.

“We were just ecstatic,” said Burt a few minutes after the win. “We knew we had a good team but it’s always tough no matter what.”

With the victory locked up, it was time to celebrate. “We’re always loud,” laughed Burt. “But it’s a job just to get here. And now we just have to come to the banquet tonight and have a good time.”

Dominion Command Sports Committee representative Clarence Paul—also the national president of the Tuberculous Veterans’ Section—felt that the weekend organized by the Local Arrangements Committee chaired by Scott MacMillan had been a success. “The spirit here is tremendous. I know they’re all in competition against each other but they’re patting each other on the back and shaking each other’s hands,” he said. “I think you have to be here to feel the vibe and see the guys. Sports have got to stay a part of the Legion.”