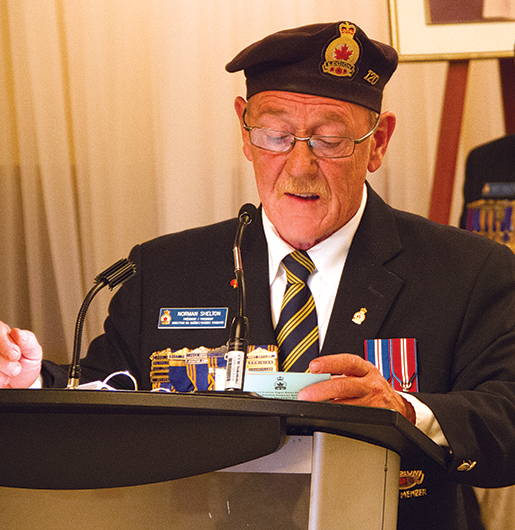 Norman Shelton is installed for another term as president.
TOM macgregor
Quebec Command delegates showed their support for getting the command back on a solid financial footing when delegates met in Laval for the 56th Quebec Command Convention May 15-17.

President Norman Shelton set the tone early in the convention in his President’s Report: “Comrades, the past two years at Quebec Command have been a challenge, to say the least. We have been in a deficit for the past five years, so we have had no other choice than to make as many financial cuts as possible, without eliminating any program or services to our veterans.”

Among the savings outlined were reducing convention costs by $25,000, signing a new lease for the command office at a savings of $27,000 and withdrawing the command’s participation in two Dominion Command sports, curling and eight-ball.

Later in the convention, Treasurer Madonna Boch presented a recommendation that the per-capita tax be increased by $3. “Twelve years ago, command reduced the per-capita tax by $2 and now we need to bring it back to what it was 12 years ago, plus a one-dollar increase because of the decrease in membership and changes in the economy,” she said.

Former Quebec Command president Don Wells told delegates: “I guess I’m part of what is called the Old Guard, but we were too generous 12 years ago. We should have kept the money,” he said. 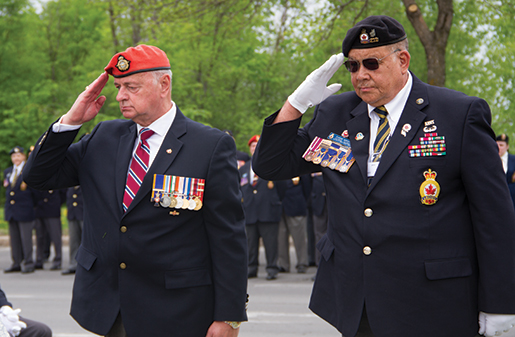 Veterans Ombudsman Guy Parent (left) and Vice-President Eugene Montour salute after placing a wreath.
TOM macgregor
During the debate, Shelton amended the recommendation to ask for an increase of $2 and delegates agreed.

Among the changes at this convention was to squeeze all ceremonies and business into two days. While registration opened the day before, the convention began with opening ceremonies on the Saturday morning. Following greetings by Dominion Vice-President André Paquette and Laval Mayor Marc Demers, delegates broke for a parade to the cenotaph near Laval City Hall. After a wreath-placing ceremony, the parade marched off with Shelton, Paquette, Charlotte Bastien of Veterans Affairs Canada (VAC) and Veterans Ombudsman Guy Parent taking the salute.

Business resumed after lunch at the Paragon Reception Hall near Chomedey Branch. The 105 delegates were seated around the banquet hall at round tables covered with white linen. Dominion Vice-President Tom Irvine, a former Quebec Command chairman, filled in for Chairman Jean-Robert Pépin who was unable to attend.

Parent was the first guest speaker. He noted that The Royal Canadian Legion has been helping veterans for 90 years. “What do I do? I am the protector of veterans’ rights. We do 2,000 investigations a year,” he said. “A veteran is a veteran and should be treated with equality. The government of Canada has an obligation to make sure they have the benefits they need, not necessarily those they want.”

While praising some of the improved benefits for veterans recently announced, he added, “When the minister told me that they were closing the gaps [in benefits], I told him, ‘You have narrowed the gaps. They are still there.’”

The parade comes to attention.
TOM macgregor
William Kane of the residents’ committee at Ste-Anne’s Hospital in Ste-Anne-de-Bellevue also spoke, saying the committee is not getting the same amount of money for the veterans from the branches as it has in the past. “Without our programs, the residents sit in their rooms, they have no social life and they quiet down. We don’t like that,” he said.

Kane said the Quebec government gives them an annual grant of $6,000 but it doesn’t go very far for the 300 men and 30 women residing in the veterans’ hospital.

Delegates also heard from Jacques Vezina of the centre CASA therapy agency in Quebec City. CASA offers counselling services for people dealing with addictions, many of whom are veterans. He said the centre is a national organization offering its services to francophones throughout Canada.

Vezina was asking for the command’s support in refurbishing the centre’s gymnasium, which is particularly useful for clients who suffer from post-traumatic stress disorder. Delegates agreed to table the request.

Only a few resolutions had been concurred by the command’s committees and presented at convention. Delegates agreed to a resolution that Dominion Command pay for a service officer position in Quebec, preferably placed near a military base or VAC office. Another resolution asked Dominion Command to assist branches in paying for monthly Internet service. 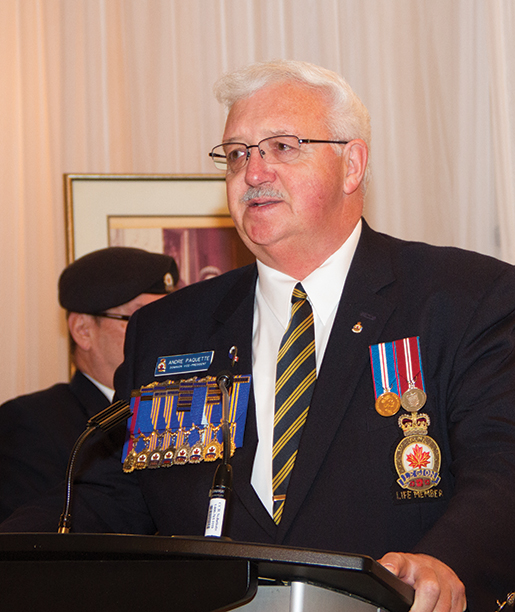 Dominion Vice-President André Paquette brings greetings.
TOM macgregor
One resolution asked that curling and eight-ball be discontinued as dominion-level sports while expressing support for the cribbage and darts programs. Another resolution asked that Legion Magazine, including all editorial and advertising, be made available to all members, in colour and in the official language of choice.

In late resolutions successfully brought to the floor, delegates called on Dominion Command to reverse its opposition to having Remembrance Day declared a statutory holiday.

Paquette assured delegates that Dominion Command had listened to the message from the dominion convention in Edmonton last year and had made several cost-cutting measures at Legion House and to Dominion Command committees.

“When we get to St. John’s [for the 2016 dominion convention], we’re looking to have a balanced budget, which hasn’t happened in years,” he said. “We can’t keep going to the reserve fund and grabbing a chunk of money and continue on.”

A video was also shown of Dominion President Tom Eagles explaining changes at Dominion Command and highlighting the work it does for impoverished veterans in the Caribbean on behalf of the Royal Commonwealth Ex-Services League. Afterwards, $865 was collected to support the RCEL.

Paquette also acted as elections chair. First up was the position of president. Norm Shelton of Terrebonne Heights Branch in Mascouche Heights was nominated for another term. Jean Theriault of Joseph Kaeble VC MM Branch in Rimouski, a former vice-president and first vice, challenged him for the position. Shelton was elected, making it his third term as command president.

Vice-President James Riddell of Arthabaska Branch in Victoriaville was acclaimed as first vice.

Incumbent Madonna Boch of Hon. John Diefenbaker Branch was defeated by Rick Cartmel of Dorval Air Services Branch in Dorval for the position of treasurer. Past President Margo Arsenault remains in the position for another term.

The new executive is rare in that five of the seven elected members are veterans. Montour served with the United States Army in the Persian Gulf War, while Riddell and Howe are Cold War veterans and Racine and Cartmel served in United Nations peacekeeping missions.