The Canadian army played a big role in liberating the Netherlands. Canada and Holland have been best friends ever since

The Second World War in Europe ended officially on May 7, 1945, with the unconditional surrender of all German forces. For the First Canadian Army, however, it had ended two days earlier. On May 5, German General Johannes Blaskowitz surrendered the 120,000-strong Twenty-Fifth Army to I Canadian Corps commander Lieutenant-General Charles Foulkes at Wageningen in the Netherlands. Almost simultaneously, at the German resort town of Bad Zwischenahn, II Canadian Corps’ Lieutenant- General Guy Simonds accepted General Erich von Straube’s surrender of about 93,000 troops in northwest Germany.

The latter surrender was a muted affair, but in the Netherlands the coming of peace sparked an eruption of public rejoicing that neither the Dutch nor the Canadian soldiers would ever forget. Nowhere were the spontaneous celebrations more jubilant than in the large cities, such as Amsterdam, Rotterdam, Utrecht and The Hague. By May 5, the majority of the Netherlands, except the western portion where these cities were situated, had been liberated. With the surrender, Canadian troops advanced into this region. 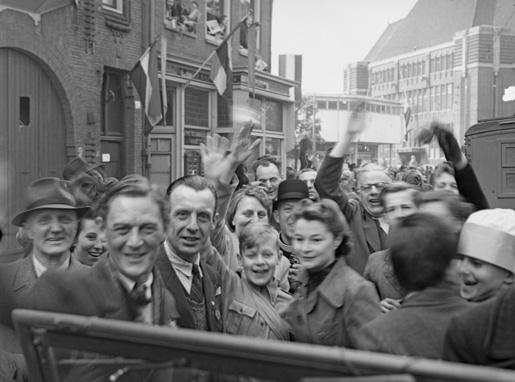 A sea of happy Dutch citizens welcomes the British 49th Division during the liberation of Utrecht, Netherlands, on May 7, 1945. This division served with the First Canadian Army at the time.
LAC/PA-171747

When the Seaforth Highlanders of Canada entered Amsterdam, they were met by “thousands upon thousands” of Dutch lining the streets, as Seaforth padre Roy Durnford scribbled in his diary.

“Flowers—roses, tulips and every sort. Crowds load every vehicle.… Terrific welcome. They tell in broken English with tears and unbridled joy how thankful they are to us. Children are lovely. Terrible shortage of food, ½ loaf bread, handful of potatoes per week. No fats, no tea, sugar, cocoa, firewood. Thousands of old people die. We camp in park.… I rejoice today with the free.”

To keep the crowds at bay, the Canadians camped in the large and central Vondelspark. Despite the barricades around their tents and vehicles, the camp was easily infiltrated. By merely slipping through her backyard garden gate, young Margriet Blaisse got inside. Walking up to a tall officer, she invited him home to meet her parents. Lieutenant Wilf Gildersleeve brought along 19 friends.

“My parents couldn’t believe it,” Blaisse wrote. “They were all sitting on the balcony laughing, crying and talking.… Then they left. In the evening…we heard knocking on the front door.… I went downstairs and there was Wilf with a friend. Wilf was dressed in a kilt with his arms full of bread and butter and cheese and ham.… Oh, my gosh, we ate so much that evening.”

Blaisse’s father cautioned the young woman, “Whatever you do, don’t fall in love with any of them. They’re all going back to Canada and you’re staying right here in Amsterdam!” 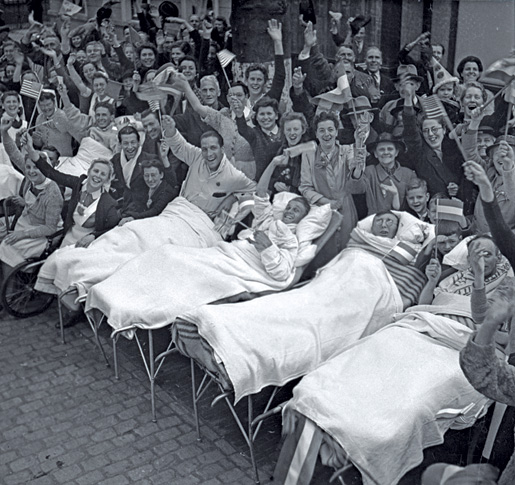 Patients were carried from a hospital into the street to join the celebrations in Utrecht.
LAC/e010865632

While the Dutch would remember the spring of 1945 as the “sweetest,” for the Canadian soldiers it was somewhat bittersweet. In all, more than 7,600 Canadian airmen, sailors and soldiers gave their lives for Dutch freedom—and remain buried on Dutch soil. In April 1945 alone, 1,191 soldiers died. Another 114 fell in the first days of May.

The Netherlands’ southern provinces had been liberated during the otherwise failed Operation Market Garden in September 1944, and in the Scheldt Estuary Campaign from the end of September to early November. But the main effort, Operation Plunder, had not come until March 23, 1945.

Operation Plunder sent the First Canadian Army across the Rhine River into Germany to execute a leftward hook into the Netherlands that put it behind the main enemy defences. Despite heavy initial casualties, the Canadians quickly broke into the Netherlands and undertook a two-pronged advance. While II Canadian Corps struck northward through the country’s heart, I Canadian Corps—having transferred from Italy to join this final operation—drove toward the major cities in the west.

The Canadian high command knew the troops heading for these cities were racing against time. The Germans had created vast food shortages in the cities and even much of the countryside through their extensive looting of anything of value and destruction of the country’s transportation, fuel and power networks. The winter of 1944-45 brought the worst weather Europe had seen in at least 50 years. There was no fuel for heating or cooking. The Dutch dubbed this the Hongerwinter (hunger winter). Some 20,000 Dutch starved to death in the months before the liberation. Many were reduced to eating tulip bulbs to survive.

Fearing that an outright push into western Holland would prompt the increasingly desperate German defenders—who were cut off from any possibility of retreat to their homeland—to breach the vital dikes and flood the region, the Canadian advance was temporarily halted on April 25 along a line running through Amersfoort. Allied intelligence analysts also feared that street battles inside the cities would cause great civilian losses in addition to many military casualties. 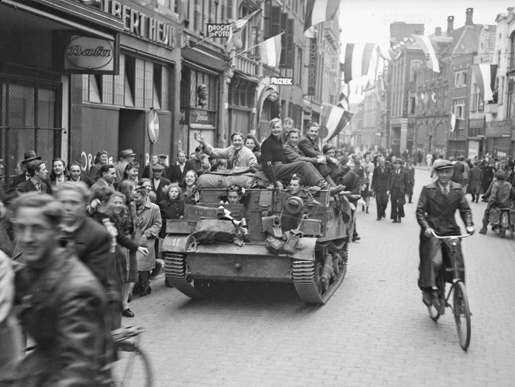 Dutch civilians in Zwolle ride on a Universal Carrier of the Régiment de la Chaudière.
LAC/PA-136176

Secret feelers were extended to the German command via the Dutch resistance. This led to the start of negotiations on April 27 for a formal ceasefire in the region. The next morning, Operation Manna began with Royal Canadian Air Force and Royal Air Force bombers dropping bundles of army rations to the Dutch. But air supply could not possibly suffice. It would take truck convoys and the passage of freighter ships into the region’s harbours to deliver enough food. On April 30, the Germans agreed to stand their troops down and allow the convoys safe passage beginning May 2. Three freighters a day would also be allowed into Rotterdam harbour starting May 4. Meantime, Operation Manna continued.

Royal Canadian Army Service Corps Captain Robert H. Parkinson led the first trucks through the German lines. “We knew we were taking food to the Dutch people,” he remembered. “It was interesting and somewhat scary as we passed German soldiers who were fully armed.… We off-loaded the food at the side of the road and turned it over to some kind of Dutch authorities.… They took charge of the food and we didn’t at any time have…contact with the Germans.” Operation Faust saw 1,000 tons of food and medical supplies delivered daily. It ran until May 8.

As the Netherlands was slowly rebuilt, the Canadians waited to return home. The last did not leave the country until late in 1946. Some 1,886 brought back Dutch brides. Wilf Gildersleeve came home alone, but he soon returned to take Margriet Blaisse’s hand and bring her to Canada. 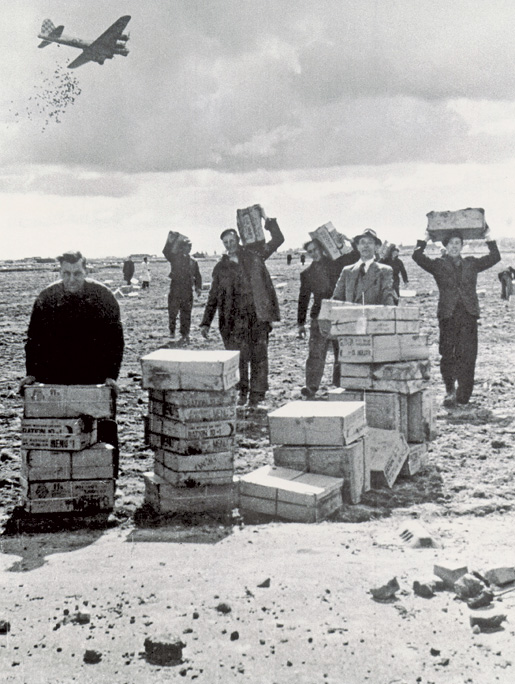 A photo montage made from two negatives depicts an Allied plane dropping food over Schiphol Airport while residents eagerly collect it for distribution to the hungry citizens of Amsterdam on May 2, 1945.
LAC/PA-164611

May 4 became Remembrance Day in the Netherlands. It remains a solemn occasion and one the Dutch mark with ceremonies at the Canadian War Cemeteries of Bergen op Zoom, Groesbeek and Holten. At Holten, children from the area lay yellow tulips before each of the 1,393 headstones. In Groesbeek, thousands of Dutch citizens walk in silence at sundown to the cemetery to pay their respects to the more than 2,300 Canadians buried there. Because the town of Bergen op Zoom was liberated during the Scheldt fighting on October 27, 1944, commemorations at the cemetery there are held on that date.

Dutch Liberation Day on May 5 is much less somber than the previous day, but it is still marked by remembrance ceremonies. A highlight is the Wageningen parade and festival in the town where the Germans surrendered. Participants in past years have included Canadian veterans, Royal Canadian Legion representatives from Canadian and Dutch chapters, re-enactors driving columns of historical military vehicles, several pipe and drum bands, and Canadian Armed Forces personnel. Crowds of more than 120,000 people attend—reaffirming the strong memory of the events of war that forever bind Canada and the Netherlands together.