Shattered by Germany’s occupation of their homeland, a Dutch family barely survived to rebuild their life

As a three-year-old, I had no real comprehension of the horrific circumstances in which I lived. The hand grenade, carelessly discarded by a Nazi soldier, attracted my attention. I was playing outside my home in the Netherlands in 1944 when I saw it lying on the patio. I picked it up and studied it for a moment. With its long wooden handle and round metal top, it resembled a potato masher.

Then I began pounding the brick wall with it. The banging startled my mother, who rushed to the kitchen window, saw what was happening, and hollered at me to stop immediately and put that dangerous thing down. I couldn’t see why, but I reluctantly obeyed. There were no toys for me to play with and now that I’d found one, I had to leave it alone. 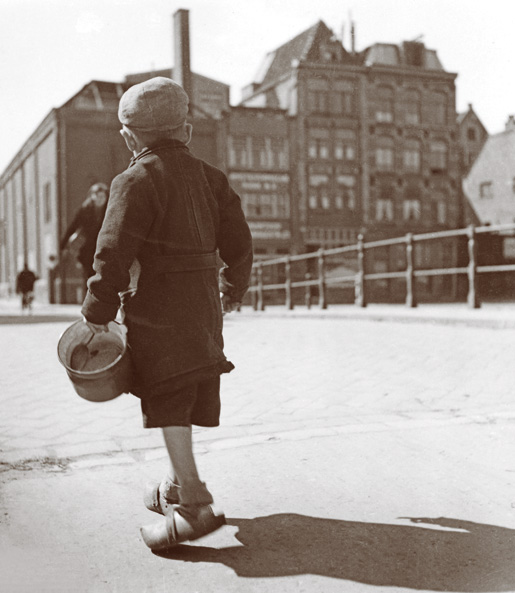 Empty bucket in hand, a hopeful Dutch boy crosses a bridge in Holland during the Hongerwinter (hunger winter) of 1944-45.

Several months later, in January 1945, a makeshift sled carried me across freshly fallen snow toward the city of Roermond in Limburg, the country’s most southerly province. My father, in his mid-30s then, was pulling the sled. He had the worn-out body that was typical of all Dutch men and women who, so far, had survived the Hongerwinter (hunger winter) of 1944-45.

My sister Paula, an infant of only 10 months, lay bundled in blankets in the baby carriage that our mother pushed on the uneven, snow-covered country road. Dad would have gladly taken this burden from her, but he had to pull the heavy sled. Not only was I sitting on the wooden slats, but all our family’s needs for the long journey had been loaded on it.

I had been born in Rotterdam on April 8, 1941, in the second year of the Second World War. That was almost a year after the Rotterdam Blitz, the German bombardment of the port city on May 14, 1940. The city still lay in ruins. My parents’ house was completely destroyed, leaving them with only the clothing on their backs. 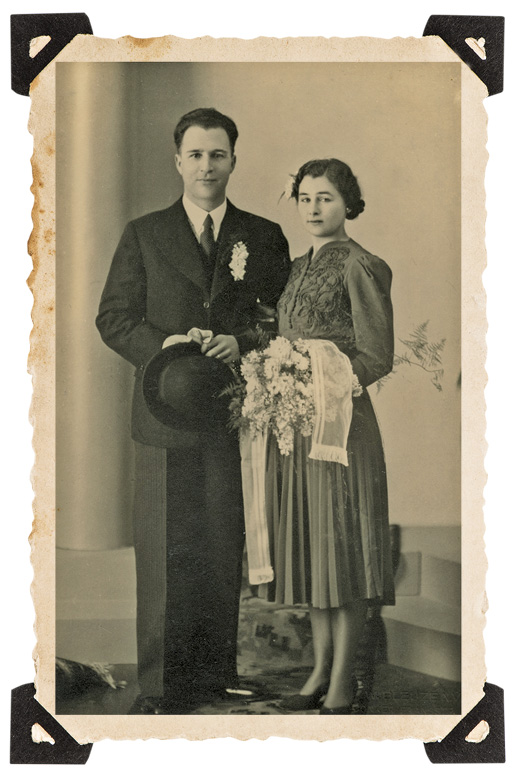 The author’s parents, Gerard and Marie Triesman, on their wedding day, March 26, 1940, six weeks before the Nazis invaded the Netherlands.
Courtesy of Gerard Triesman 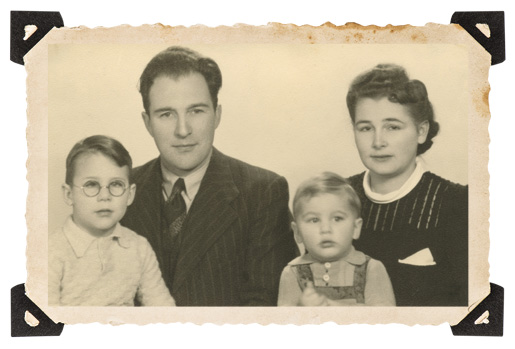 The author, his parents and his younger brother in 1947.
Courtesy of Gerard Triesman

During the German occupation, it had become terribly difficult for the Dutch to feed themselves. The provision of food was the purview of the Ministry of Agriculture and Fisheries, and my father was part of the team that searched for food and distributed it in a fair manner. He had been transferred to Roermond, where a small two-storey house was found for us in the quaint little village of Maasniel, on the east bank of the Maas River less than a kilometre from the German border.

The Americans freed the south of Limburg in September 1944, but the Germans quickly put up artillery positions along the Maas River farther downstream. Large trenches were dug to optimize these defence lines and to prevent American tanks from pushing through any farther. As more labour was required to enhance these fortifications, all males between the ages of 15 and 65 in Roermond and surrounding areas were called up for “entrenchment duty.”

Most men, my father included, promptly went into hiding, forcing the Germans to use another approach. Thousands of Russian men and women were brought in from Germany to work as slave labourers. These sad people in their shabby clothes did back-breaking manual work, such as digging trenches and installing barbed wire barricades. 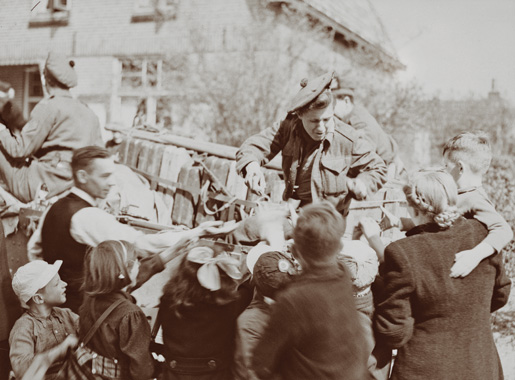 A soldier with the Stormont, Dundas and Glengarry Highlanders distributes candy to citizens in the eastern Netherlands town of Bathmen on April 9, 1945.
LAC/PA-137908

The food shortage got worse. To alleviate this grave condition, civilian authorities set up soup kitchens, but there was barely enough food to go around, and the quality of the provisions was deplorable. To make matters worse, Paula had contracted whooping cough, an infectious bacterial disease. She was taken to a small medical clinic in Maasniel, where the nurses looked after her with a meagre supply of medicine and an abundance of loving care.

To reach the soup kitchen, my mother and I trekked through backwoods and fields, which were difficult to traverse due to the German defence measures. The only way to get across the deep, wide trenches was to descend to the bottom first and then clamber back up the opposite side.

One day, as we plodded along, explosions and shrapnel suddenly filled the air around us. My mother pushed me to the ground and threw herself on top of me. Holding her head down and shaking like a leaf, she stayed there, sheltering me, until the barrage stopped. When we finally returned home with the food rations later that day, my exhausted mother fell to her knees and thanked God for safeguarding the two of us.

The advancing Americans reached the west bank of the Maas in November, around when the First Canadian Army freed the Scheldt Estuary. On the other side of the river and still in German hands, Roermond came under relentless fire, but Hitler’s paratroopers had fortified the city and its surroundings. The Germans were determined not to lose this stronghold. 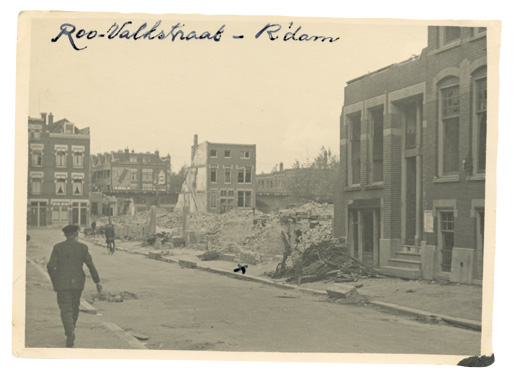 An X marks the spot where the Triesman’s house stood before the bombardment of Rotterdam by the German Luftwaffe.
Courtesy of Gerard Triesman

With the defence of Roermond intensifying, the Germans saw the presence of the Dutch population (mostly women, children and old men) as an obstacle. Their solution to the problem was to evacuate the civilians. This began in mid-January 1945. Twelve thousand people were sent to the north. My father came out of hiding and got us prepared for the journey. Baby Paula, although still very sick, was brought home, too.

Cold and tired from the strenuous walk through the snow from Maasniel to Roermond, we gathered with other evacuees in a large agricultural auction hall and spent the night on the icy, concrete floor, scarcely covered with straw. Early the next morning, noisy German troops herded us over muddy, slippery dirt tracks across the border. Near the village of Brüggen, just inside Germany, a long line of train carriages, with a huge steam locomotive up front, awaited us.

My parents and I and Paula in her baby carriage were placed in one of the compartments. Many others less lucky were placed in cattle cars. Huddled in worn winter coats and blankets, everybody quietly waited for departure. Low voices and soft cries were heard all around. The only German around the train not in uniform was a physician who moved between passengers, tending to the sick. He examined Paula, too. There was little he could do for her, except utter a few friendly words to reassure my parents.

The steam engine fired up and the train started moving, jerking the rail cars as their couplings connected. A high-pitched whistle cut through the damp morning air, almost drowning out the screeching of the wheels. The sounds heightened our anxiety, making us forget our empty bellies for a moment. The train picked up speed, as filthy, smelly clouds of soot surged past the compartment windows.

The transport of German soldiers and military provisions was being sabotaged as much as possible by the Allied Forces. Anything that moved became a target, which was a valid strategy, but unfortunate for the evacuees. Our train, heading north along the German side of the border, was seen as an attempt by the crumbling Third Reich to move troops and equipment, and was promptly attacked by British RAF planes.

Fearing for their lives, the train passengers prayed that the raid would be over soon, but the deadly projectiles kept coming down. As the train came to a halt, I jumped when our compartment window was smashed and shards of glass landed in Paula’s carriage. My trembling mother, scared out of her wits, bent down over my baby sister and thanked God again. She wasn’t hurt.

During a lull in the attack, everybody disembarked and took shelter under a freight train parked on tracks about 20 metres away. Suddenly, a shell exploded nearby and the force caused the freight cars to roll, causing panic. My father and the other men grabbed the axles and managed to keep the train stationary.

When the shelling ended and the RAF planes flew away, smoke was still rising from a couple of the train’s wagons. Nevertheless, they looked sound enough to be boarded again and the perilous journey resumed.

Three days and approximately 300 kilometres later, our damaged train crossed the German border back into the Netherlands. After our arrival at the village of Parrega in the province Friesland, we were lodged in private homes. My parents and Paula were taken in by a Friesian skipper and his wife. To prevent me from contracting Paula’s illness, I was temporarily placed on a farm just outside the village. Within a couple of weeks, however, I was reunited with my parents in skipper Feenstra’s small home, but not with my baby sister. Her health had deteriorated rapidly and she had to be hospitalized. Sadly, Paula succumbed on Feb. 28.

On April 8, my birthday, the long-awaited announcement from England “De fles is leeg” (The bottle is empty) was heard over the radio. This coded message conveyed to the Dutch that the war would be over very soon and that the Resistance should set its planned sabotage of German operations in motion. The first Canadian armoured vehicles rolled into Friesland from the regions that had already been liberated. The Dutch people cheered the Canadian troops as one town after another was freed. By April 18, the whole province was released from the Germans and exuberant celebrations erupted everywhere.

Freedom and peace had been regained at a heavy price. Fierce fighting and a heavy loss of life by the Allied Forces, in particular the Canadian military, brought the suffering of the Dutch people to an end. More than 7,600 courageous Canadian soldiers made the ultimate sacrifice during the liberation of the Netherlands. To this day, the Dutch have the highest gratitude and respect for their Canadian liberators. It is no surprise that strong bonds of friendship have developed between the two countries. 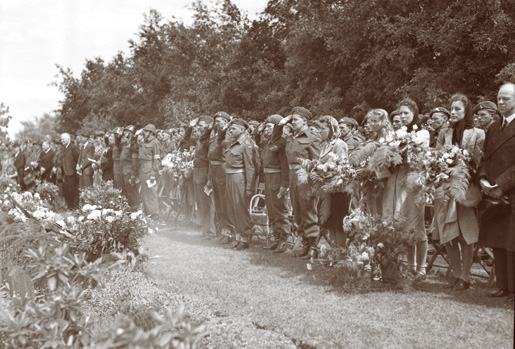 After the war, we returned to Maasniel in American army trucks and by ferry across the Maas River. Anything the German troops hadn’t taken was either damaged or, it was suspected, pilfered by civilian thieves. During our almost five-month absence, our house had been thoroughly ransacked. My parents had to start their home anew. But with a strong will and a lot of determination, beginning their new life gave them hope for the future. My father resumed his work as an accountant at the Roermond office of the Ministry of Agriculture and Fisheries, and my mother was happy to be a homemaker again. The summer of 1945 was wonderful. Mom was cheerful and often singing while she moved around the house and she never tired of the many bouquets of wildflowers that I picked for her.

Life was by no means a bed of roses for my parents. It was a struggle, with many necessities still being scarce, but they were happy. We also had no shortage of food. The local farmers saw to that. More happiness filled our home when, in the early fall of our first year in freedom, my brother Robbie was born.

While life slowly returned to normal, my parents remained mentally scarred by the horrors of war. One New Year’s Eve, long after the war, the noise of fireworks going off startled my mother. She panicked for a few moments and started to shake, thinking we were being bombed. For many years, when my parents had friends over for a visit, the story of the hand grenade—my dangerous plaything—was often recounted. The German occupation was always the topic of conversation. I suspect that it served as therapy for them.