On the third day of the Second Battle of Ypres, the Germans unleashed another chlorine gas attack. Canadians were the target this time

The Second Battle of Ypres in Belgium began on April 22, 1915, when thousands of German soldiers, advancing behind a ground-hugging cloud of chlorine gas, seized control of the northern half of the Ypres Salient, the bulge in the battle line projecting into German territory. 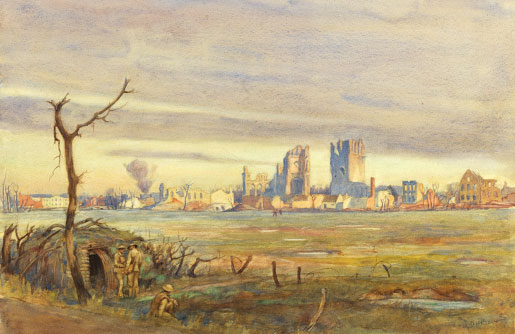 The watercolour “First Glimpse of Ypres” depicts the ruins of the Cloth Hall in Ypres, Belgium, which Canadian troops defended in April 1915. The crude shelter in the foreground provided respite for soldiers.
Lieut. Cyril Henry Barraud/Canadian War Museum/19710261-0021

The attack exposed the long left flank of the 1st Canadian Division. British and French generals were unable to exercise overall command and the Allied response was chaotic and uncertain. The Canadians, in their first major action, were ordered to launch poorly prepared counterattacks while holding their improvised front to the last man.

After 36 hours of continuous combat with minimal assistance, the Canadians still held a patchwork of positions along the road from Ypres to Poelcappelle. Much of the Allied heavy artillery, so crucial to battlefield success, was short of ammunition and out of range. There was no effective counter-battery fire and few aircraft to contest the skies over Ypres.

The 2nd and 3rd Canadian Field Artillery brigades were still within range of much of the front, but were so short of shells they could only respond to emergencies. The shrapnel shells provided to the 18-pounder gun batteries could be used to break up German attacks, but could do little to suppress enemy machine-gun or artillery fire.

“The enemy’s aeroplanes were continually circling over us and flying low up and down the trenches,” recalled Canadian medical officer Captain W.M. Hart. “At one time I counted four German observation balloons, anchored at the corners of a large square of which we apparently formed the centre. It was noticeable to all of us that, in spite of the terrific shelling at the hands of the Germans from all sides of the salient, either our artillery was failing to make any effective reply or had been withdrawn.”

The situation on April 23 called for a thinning out of the lines and a nighttime withdrawal to a new defensive line anchored on Gravenstafel Ridge. Instead, additional rifle companies were sent forward to occupy positions that could not be held if the Germans renewed offensive operations. 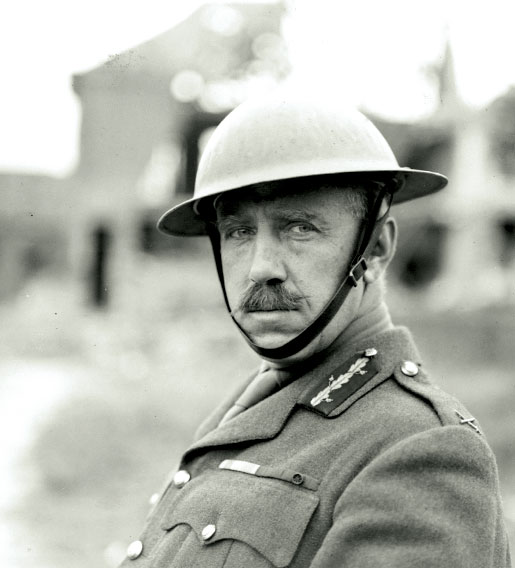 The Germans barraged the Canadians with “continued fire with machine guns during the night and with artillery, machine guns and rifle fire during the day,” wrote Lieutenant-Colonel F.O.W. Loomis.
DND/LAC/PA-002192

The Black Watch, positioned at the narrow apex of the salient, were allowed to withdraw a short distance. But, as Lieutenant-Colonel F.O.W. Loomis of the 13th Battalion (Royal Highlanders of Canada) reported, the enemy kept up “continued fire with machine guns during the night and with artillery, machine guns and rifle fire during the day. One of our machine guns was blown to pieces and the crew killed.… The other two were completely buried and most of the crew killed. These latter two guns, however, were dug out and taken back to a new position.… The men were all night entrenching.”

The Black Watch linked up with the 7th (British Columbia) Battalion, which had been sent to the village of Keerseleare to occupy the gap east of St. Julien. The 7th had been recruited in Vancouver from militia regiments and British army veterans. Lieut-Col. William F. Hart-McHarg and his second-in-command, Major Victor Odlum, were both Boer War veterans from the Duke of Connaught’s Own Fusiliers, which provided the bulk of the recruits. Other volunteers came from Lower Mainland regiments and the Kamloops-based Rocky Mountain Rangers. Hart-McHarg was an effective leader despite an illness that had “reduced his diet to biscuits and milk…a shadow of his former self. At 5’11”, he weighed no more than 145 pounds,” according to a regimental history. 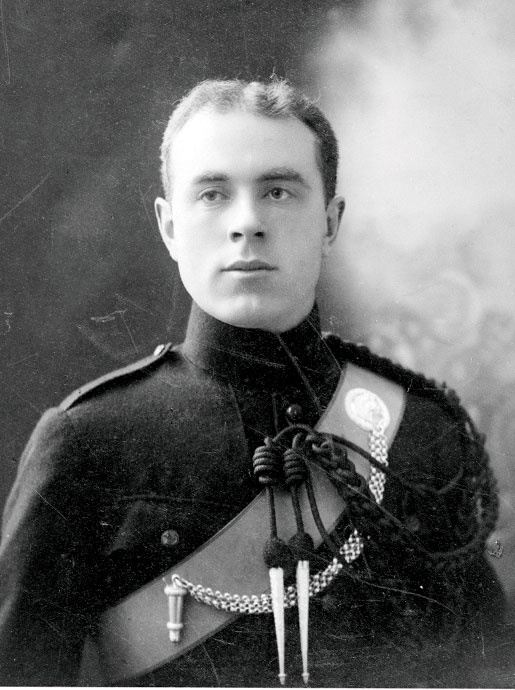 Lieutenant-Colonel William F. Hart-McHarg was killed while on reconnaissance of German lines.
DND/LAC/C-051983

Hart-McHarg left one of his companies back to defend Gravenstafel Ridge, while the other three dug in across a 700-metre front along a slight rise at a crossroads that became known as “Vancouver Corner.” After the war, the famous “Brooding Soldier” memorial was placed here to commemorate the Canadian soldiers who fell at Second Ypres, including Hart-McHarg, who was mortally wounded while attempting a reconnaissance of German lines.

As dawn broke on April 24, the 4th German Army was ready for a new attempt to win control of the salient. Gas cylinders not used on the first day were dug in opposite the Canadian front and an additional brigade was allocated to the 51st German Division for the attack.

A company of “Buffs” (Britain’s Royal East Kent Regiment) was the only reinforcement to reach the Canadians at the apex of the salient, and they helped the Black Watch defend the sector between the 7th and the 15th battalions. This shallow line of scratched-out trenches bent back from the original front, exposing the flank of the 15th Battalion, which had been ordered to hold its positions “to the end.”

The 15th Battalion was recruited almost entirely from Toronto’s 48th Highlanders, representing the city’s large and influential Scots-Presbyterian community. Their commanding officer, Lieutenant-Colonel John Currie, was one of the less-fortunate choices made by Minister of Militia and Defence Sir Samuel Hughes. It was widely reported that Currie broke down and fled during the battle. Fortunately, effective leadership was provided by the senior major, William Marshall, a Boer War veteran and militia instructor who toured the front-line positions and arranged evacuation of the wounded. 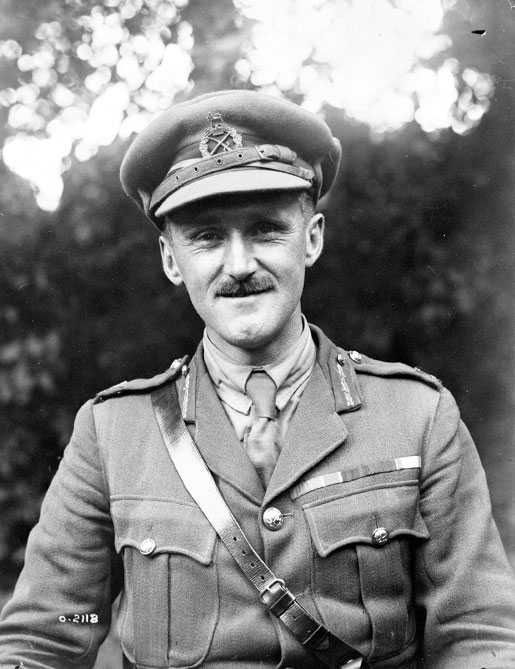 The German artillery burst into action before first light and continued firing for close to an hour before “men wearing mine-rescue helmets appeared over the German parapet; they seemed to have hoses in their hands and immediately there was a hissing sound, and a heavy greenish-yellow cloud rose slowly like a thick fog moving across no man’s land,” according to Kim Beattie’s history of the 48th Highlanders.

The gas struck the 48th Highlanders and the left flank company of the 8th Battalion. A few survivors escaped to the reserve trenches, where “men on top of the parapet were working several rifles each. The Ross rifle bolts were jamming and so they were having them loaded by others in the trench below, who hammered the jammed bolts out with entrenching tools.”

Those not affected by the deadly green fog were subjected to accurate shellfire and aggressive German infantry, which overran the position. What was left of the 48th Highlanders, fewer than 200 of the 912 available before the battle, withdrew through British units arriving at the front. They reached the general headquarters line and slept the sleep of utter exhaustion. Once stragglers had been accounted for, the 48th reported 675 casualties, 640 of them classified as killed or prisoners of war. Most of the 8th Battalion escaped the full impact of the gas and held the forward lines, constructing a new position to protect their open flank.

Raised in Winnipeg from the famous “Little Black Devils” (officially the 90th Winnipeg Rifles) and with additional recruits from the Lake Superior Regiment and the most experienced commanding officer in the division, the 8th Battalion was highly regarded. Lieutenant-Colonel Louis J. Lipsett was a regular British officer who had served in Canada training militia officers. Lipsett would command a brigade before taking on the task of leading the 3rd Division in battle. If Lipsett had been Canadian, he might well have become the Corps Commander in place of Currie, his former pupil. Instead, he rejoined the British Army and commanded a British division until he was killed in action.

Lipsett and his company commanders withstood the enfilade fire from the exposed flank using their Colt machine guns to avoid encirclement. According to the battalion historian, when ordered to retire onto Gravenstafel Ridge, Lipsett “consulted his company commanders, saw his men standing to arms, eyes heavy, lips cracked, bodies racked but with spirits unconquerable” and replied that the 8th Battalion would hold its line. This heroic version of events leaves out the key sentence in the actual message Lipsett sent to Currie: “I am not uneasy about being able to hold my line if the Germans are prevented from working round my rear.”

A German advance that would work around the 8th Battalion’s rear was already in progress, as Currie was in a position to know. Lipsett, who thought a daylight withdrawal might be more costly than holding firm, believed his men could protect the left flank until the expected reinforcements arrived.

Unfortunately, the few reinforcements available were needed elsewhere. German attacks on St. Julian threatened to cut off all the Canadian and British battalions still holding the original front. The 7th Battalion at Keerseleare and the mixed body of troops holding St. Julian were repeatedly attacked and forced to withdraw.

Despite the heroic efforts of Lieutenant Edward Bellew, who won the Victoria Cross for valour in protecting the retreat of his battalion, losses to the British Columbians reached a total of 500 men. Lipsett’s 8th Battalion and the neighbouring 5th Battalion retired under the cover of darkness.

By mid-afternoon, hundreds of Canadian soldiers, some shell-shocked, some lightly wounded, many simply unwilling to remain in exposed positions under continuous fire, made their way back to the rear. A Canadian engineer officer, Lieutenant Edison Lynn, deployed his men to intercept and organize roughly 800 men. Currie collected those from his brigade and led them back into action. The others dug in to defend the general headquarters line.

After the British official history criticized the actions of the Canadian brigadiers, historians began to focus on the unauthorized withdrawal, on Brigadier Richard Turner’s decision to abandon St. Julien, and on the apparent conflict between Currie and Lipsett.

Both Currie and Lipsett were acting on the best information available to them and the apparent conflict only came to seem important when Canadian historians weighed in on this debate, examining tactical decisions without always addressing the larger issues of strategy and doctrine—the real problem at Second Ypres.

The British Army had gone to war with officers drawn from a professional army organized to police a colonial empire and fight colonial wars. This is in contrast to the Royal Navy, which had long focused on the challenge of German naval power and methods of imposing a close blockade. The army was ill-prepared for a European war.

To make matters worse, the British army shared the view of the French generals, who in the face of much contrary evidence, argued that an Allied offensive could win the war in 1915. From this perspective, the Ypres Salient was a base for launching an attack, not a sector to be fortified and defended.

The Second Battle of Ypres ended for the 1st Canadian Division after a few days of intense combat, although four more weeks passed before both sides, out of sheer exhaustion, stopped fighting. More than 18,000 British and 1,672 Canadians were killed in action at Ypres. Some 16,000 were reported missing, a quarter of whom were prisoners of war, including 1,767 Canadians. German losses were less than half the Allied casualties, reflecting the long drawn-out attempts to restore the original salient by repeated attacks.