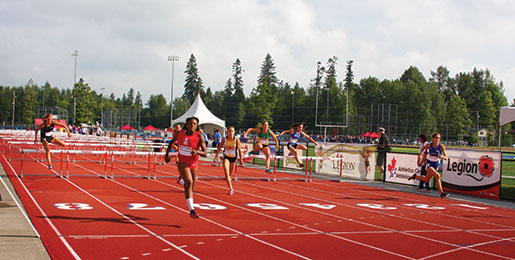 The tranquil Monday morning on the beach near White Rock, B.C., is about to be disrupted as hundreds of young people—athletes all—appear, picking their way down a stony path between blackberry bushes, trekking across the sand to form up in lines facing the shore.

The athletes have just competed in the 38th Royal Canadian Legion National Youth Track and Field Championships, a meet made special not just because it has started careers of dozens of Olympic athletes, but for a special rite these young people are about to perform. They are here to commemorate the landings at the D-Day beaches 70 years ago. As in previous Legion-sponsored meets, time is taken to give thanks for freedoms secured by the service and sacrifices of earlier generations of young Canadians.

Greeting the athletes on the beach is an unusual sight—replicas of beach barricades and stacked rifles and posters from the Second World War. Tony Elliott, 15, of Mildmay, Ont., transports the young people back through time when young Canadian liberators were met by beach barricades, barbed wire, minefields and machine guns on Juno Beach in Normandy. “Imagine you’re a 17-year-old facing this. Jumping into the frigid water, running shooting and fighting… Can you imagine? It’s almost impossible. Our lives are so much different. This is why it is important for youth to participate in this moving act of remembrance. Every generation anew must continue to remember and to honour and to carry the legacy forward.” 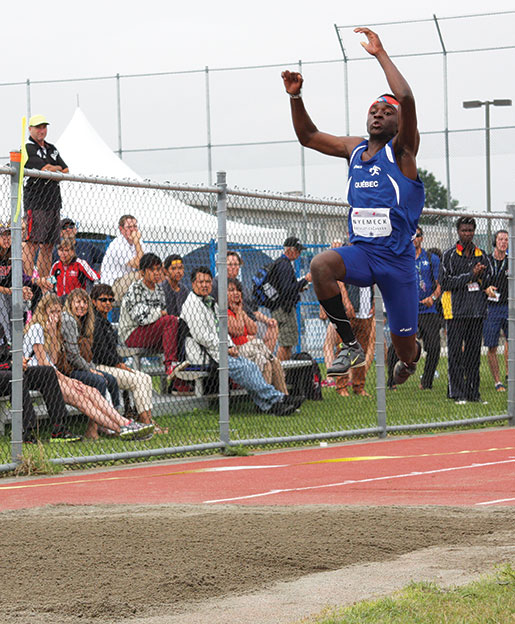 It was but one poignant moment in the championships held Aug. 13-19 at the McLeod Athletic Park in Langley, B.C., during which 427 Legion-sponsored and 374 independent athletes set 19 new Canadian youth records.

Athletics Canada has recognized the Legion Nationals as the official Canadian championships for youth aged 12 through 17 since 2008. Olympic careers have been starting there since the mid-1970s. “In the 2012 London Olympics 60 per cent of the athletes on Team Canada came up through the Legion track program,” said Dominion Command Sports Committee Chairman André Paquette.

The event began for Legion-sponsored athletes with advice from Regina’s Lynn Williams, bronze medallist in the 3,000-metre run in the 1984 Olympics, who set 11 Canadian running records between 1983 and 1989 and Chris Winter of North Vancouver, fresh from his sixth-place finish in the 3,000-metre steeplechase at the Commonwealth Games in Glasgow. Their overall message was to never give up—not through disappointment, injury, loss, career plateaus. “You never know what’s going to happen,” said Williams. Winter added that when the unexpected happens to an opponent, the wise athlete is prepared to take advantage of every break.

Miriam Abdul-Rashid’s sights are set on the Olympics, and getting her first taste of stiff competition in the 2012 Legion nationals was a big step forward. “I’d never been to a meet that big.” Legion nationals prepared her for the World Youth Championships last year and the World Juniors this year. In her final appearance at the 2014 Legion nationals, the 17-year-old runner set a new Canadian youth record of 41.85 seconds in the women’s 300-metre hurdles. “I really wanted to go out hard for the first hurdle. It was mostly a technical race. It wasn’t a personal best I was going for; it was a record.”

Athletes hone their skills against good competitors, and results of the 2014 distance races show just how stiff the competition is. All three medallists in the girls 1,200- and 2,000-metre races broke the previous Canadian youth records, shaving seconds off the best times. Winning gold in both events was Shona McCulloch of Ottawa with respective times of 3:31:70 and 6:14:15; silver medallist Sevanne Ghazarian of Guelph clocked in at 3:31:80 and 6:15:40; and Sophie Sigfstead of Edmonton was close behind at 3:33:77 and 6:17:62. The previous record for the 1200-metre race, set in 2012, was 3:35:33; in 2014 a mere tenth of a second separated gold from silver. 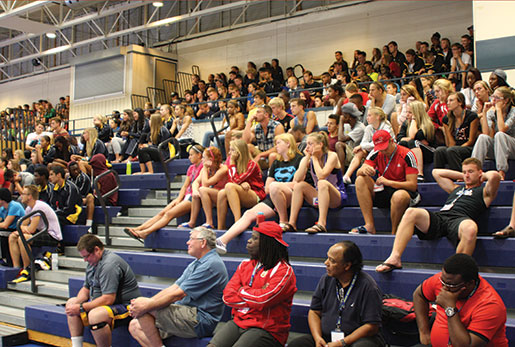 Other record-breaking track athletes included Kyra Danielson of Vancouver with a time of 7:51:83 in the 1,500-metre race walk; Arielle Bykovskala-Domin of Montreal, with 27:43 in girls 200-metre hurdles; Toronto’s Vahid Andrews with 25:23 in the boys 200-metre hurdles; Nathan Friginette of Toronto with 35:53 in the boys 300-metre race; Winnipeg’s Victoria Tachinski with a time of 2:07:91 in the girls 800-metre run; and Thomas Nobbs of Vancouver at 4:18:39 in boys steeplechase. Breaking records in field events were  Cyerra Cassell of Toronto, with a hammer throw of 61.06 metres; Jessye Brockway of Mill Bay, B.C., set two new youth records with a wheelchair javelin throw of 15.30 metres and a seated discus throw of 20.22 metres.

But it’s not all about breaking records. For some young athletes, it’s about proving themselves.

Foster Beaton of Brockville, Ont., just missed making Team Ontario, but that didn’t keep him from competing. “They picked the top 40 and I was the 43rd. I wasn’t mad at the coaches but was wondering why they didn’t pick me. (I thought) ‘you’ve made a wrong choice.’ That’s what gave me the extra push to get here.” He won gold in boys shot put with a throw of 15.96 metres. “My advice is just to stick with it. At the start of the year I was throwing 12 metres. My coach showed me the little things that moved me from 12 to 15 metres. I say, stick with it, train hard.”

“I did my first personal best in that event in over a year,” said Kenneth Schultze, 17, of West Vancouver, B.C. “You get stuck and think you’ve plateaued, but competing shows you you have places to go.” He went on to place third in the 110-metre hurdles later in the competition and has his sights on the Pan American Junior Games in 2015.

Some athletes look at these competitions as a way to motivate themselves and learn more.

“It’s made me think about my future,” says Sara Murray, 16, of Saskatoon. “It seems, like, real, and makes me want to compete at higher levels.

Taylor Dunn, 17, of Fredericton describes a continuous learning curve over her four experiences at Legion nationals. “I have really changed. I know what not to do, what to do, when to warm up. You learn from presentations a lot. You learn from your competitors.” 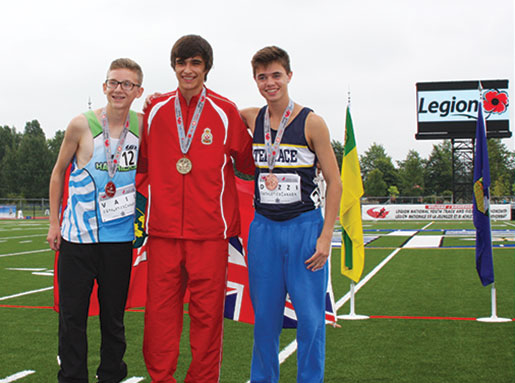 Multiple medalist and para-athlete Madison Wilson Waker, who lost both legs to meningitis when she was three, knows about overcoming adversity and inner demons. “Just because you have a disability doesn’t mean you can’t do anything. You can do anything other people do—and maybe better, too.” She placed silver and bronze respectively in the mixed 100- and 200-metre para-ambulatory races and gold in ambulatory javelin.

Many athletes said they couldn’t get through the many years of training without support of family and community. “I get hyped when a lot of people are watching me compete,” said Keysean Powell, 17, of Brampton, Ont. “I’m not scared of messing up in front of people. I like the feeling they give me.” He frequently urges the crowd to clap as he prepares his long jumps. His exuberance comes naturally, he says—his father was a three-time Golden Glove winner, his mother a sprinter, and his siblings are athletes, too.

“Parental support for people in smaller towns is really high,” said Joseph Maxwell of Manitoulin Island in Lake Huron. “And a big part of my success is my parents, Steve Maxwell and Mary Mendes de Franca.”

But all the athletes appreciate this opportunity to make friends. “I have a lot of friends from the different provinces,” says Dunn. “We stay in contact all through the year, we message each other.”

“Relationships formed through track and field are important to happiness and success later in life; it’s what helps you through strife, and strife is where we all learn life’s lessons,” said Laurier Primeau, keynote speaker at the wrap-up banquet for Legion athletes. Primeau’s track career was sidelined by two bouts with cancer, but he came back, with help and support of a friend, to set his career record. He now coaches track at Trinity Western University in Langley.

“Knowing your performance limits is important,” he said, “but working like you don’t have them is even better.” Having limitations “doesn’t mean the struggle is any less worthwhile. Push yourself to the limit as though you could be the world record holder.”

But the event is all about the young athletes. “Just watching the performances, the dedication and focus of the athletes. If Canada is ever worried about its future adults, they’ve got nothing to worry about. The cream of the crop is here.”

Producing such a crop year after year is one of the reasons the Legion sponsors the event, during which there were many displays of “hard work, dedication, natural ability and fitness…traits that will lead us into the future,” Dominion President Tom Eagles said. “We believe the youth…are the cornerstone of this great country.” 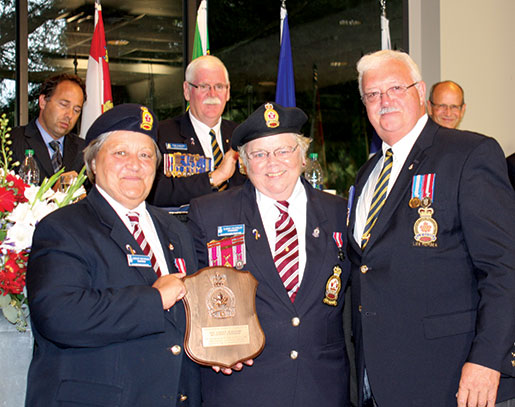 The event ended with several high notes. Paquette announced that Leroy Washburn, who’s been involved with Legion track and field since 1975, has been inducted into the Athletics Canada Hall of Fame. Washburn is credited with playing a key role over six decades in standardizing and improving the Canadian officiating program.

Abdul-Rashid had some final advice for new competitors, many of whom will go on to win medals, set records, accept such awards, though at first they may not now believe it. “If this is your first nationals, don’t get intimidated by those around you. You’re here for a reason; you’re definitely good enough to be here. If you want to make a national team, keep working hard.” And even if reach exceeds grasp, “It’s definitely worth working for something bigger than yourself.”