Amid an incredible outpouring of support by the community of Slave Lake, Alta., a nearly 200-strong contingent of wounded warriors from Canada, the United States and Britain spent a weekend this August fishing, four-wheeling and generally helping each other heal.

This was the third annual Wounded Warriors Weekend which ran Aug. 1-5 and it is aimed—like the foundation it was named for—at providing assistance to veterans suffering from operational stress injuries like post-traumatic stress disorder. It is another of the grassroots projects that have sprung up in Canada in the past few years to serve the particular needs of modern veterans. 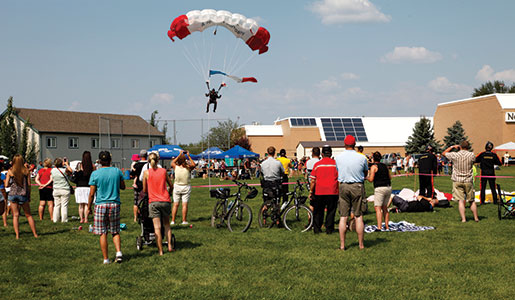 A member of the veterans’ parachute team lands at an event in Slave Lake.
PHOTO: ADAM DAY

As envisioned by its founder—air force veteran Blake Emmons—the weekend was meant to augment Remembrance Day, as a way to celebrate those who went to war and survived.

The origin of it was “pretty selfish,” joked Emmons. “I was watching what we did on Nov. 11 and I looked and I teared up and I said, ‘What a wonderful job we do, how wonderful what we do for the fallen.’ And here’s the selfish part: I thought, ‘What about me? What about all these guys?’” he says, looking around at the wounded warriors surrounding him in Slave Lake. “Man, we’ve got to have a celebration for guys like me, a party and a time for us to come together.”

And so Emmons, then residing in Nipawin, Sask., began planning a weekend event for local veterans to get together and share some camaraderie. Before long, he heard of another organizer named Wayne Johnston, the founder of Wounded Warriors Canada. Shortly after they made contact, Emmons’ weekend had a new name and it had ballooned from a gathering of 20 veterans to about 200, all converging on the little town of Nipawin. 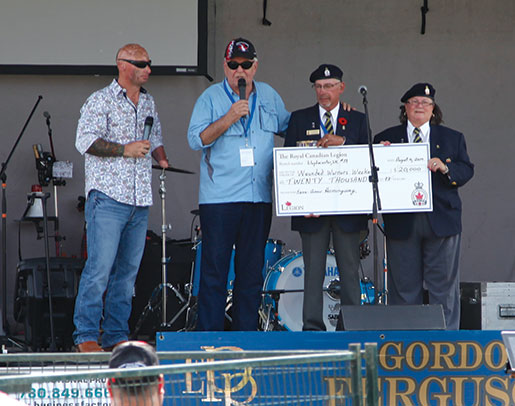 “A really bright flame got lit there a few years ago and it’s gotten brighter since,” said Johnston, who was on hand for the 2014 event in Slave Lake. The event moved to this little town three hours north of Edmonton this year because Emmons and his friend, Alberta organizer Don Clarke, thought it would be an excellent kind of symbolism to hold a weekend dedicated to recovering in a town that was itself in recovery. Slave Lake was almost entirely destroyed by wildfires in 2011.

“Not only is there great fishing up there, but we wanted to have the event in a place where the whole community could come together,” said Clarke. “It’s a small town and it has also bounced back from its own trouble.”

The weekend’s events began at Edmonton International Airport. As participants emerged into the baggage collection area, they were greeted by an honour guard of Legionnaires, military and local singers performing in the background.

Since Slave Lake is a significant distance from Edmonton airport, the organizers planned a cavalcade consisting of four coaches and at times many other vehicles, including police cars and fire trucks. Along the route, there were dozens and dozens of civilian groups gathered periodically at the roadside, cheering and waving flags as the group went past.

Once the cavalcade arrived at Slave Lake in the late evening, they were met with a genuinely unbelievable reception. To say the entire town of Slave Lake showed up would be only the slightest overstatement. Most of the town showed up. They lined the main road and they crowded outside Slave Lake Branch of the Legion. The townspeople cheered, hundreds and hundreds of them, as the wounded warriors got off the bus and went into the Legion.

And with that, the weekend officially began. What followed was three days of outdoor adventure and workshops. On Saturday there was golfing, a fishing challenge, bison farm tours and a songwriting workshop. On Sunday, more golf and more fishing, plus shooting at the gun range, a spa day for the ladies and in the evening the Lieutenant-Governor’s gala ball. On Monday, more golf, fishing and shooting plus a Heroes Hoedown (picture a music festival with military displays and a huge community turnout). 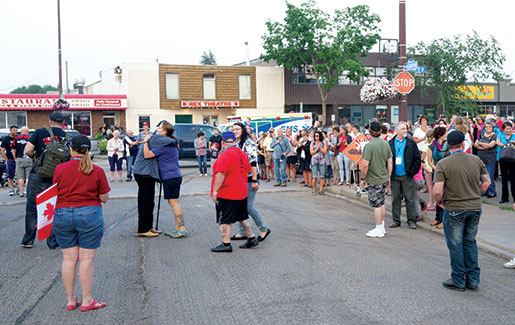 Kevin Nanson is a Canadian veteran of the Afghan war who was badly wounded by an improvised explosive device while serving with the Princess Patricia’s Canadian Light Infantry in 2008. “This weekend in general I find different from the last two. I think this weekend’s important not only for the warriors here attending but this weekend is big for the people of Slave Lake. This is a great opportunity for Slave Lake to be able to showcase how the town has adapted and overcome their adversity and to show their support for this fantastic weekend.”

For Nanson and the other veterans, however, this weekend has a distinctly therapeutic purpose in that it allows for the kind of peer-to-peer support that simply can’t be manufactured by health care professionals.

“This weekend showcases just a completely relaxed and stress-free environment and it fosters an environment of brotherhood and compassion,” said Nanson. “Every single person that’s here for the weekend is on the same road; we all may be at different points on that road but everyone’s travelling the same path, so this is a fantastic way for people to relate to each other, get different tips and tricks to deal with the adversity they’re facing, because everybody faces it in a different way. So what I’m facing today somebody may have already faced and somebody else may not have faced yet. So all these people, whether you’re from the U.S., U.K., Canada or wherever, we come together in a non-judgemental, stress-free, relaxed environment and you are able to relate to each other like brothers.” 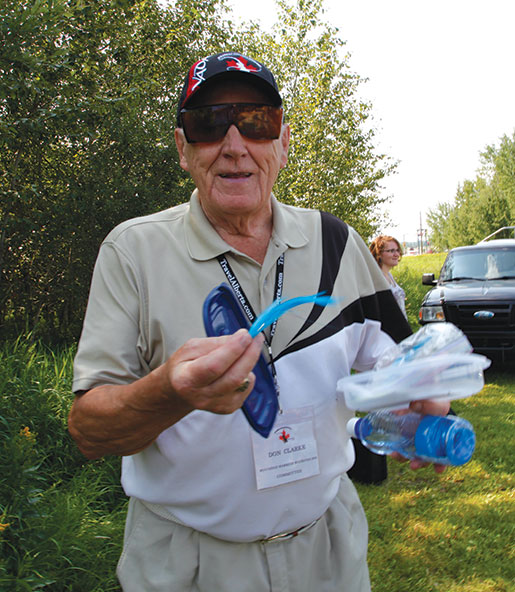 Bobby Henline, a U.S. veteran of the Iraq war who has become a comedian since returning from the war, agrees entirely with Nanson in his estimation of the weekend’s importance. “The peer-to-peer factor is huge,” said Henline. “Some of us have found ways to deal with certain things, like anxiety and PTSD, but you get others who aren’t doing it so well. I may not do well in certain situations, but others may have better ways to deal with it, which would help me. So we share with each other. There’s no better way to heal than that, to share with someone who can understand what you’re going through.”

Organizer Don Clarke also had a story to share about how the weekend was helping even those who couldn’t be there. As Clarke was getting ready to head to the Edmonton airport, he was met by an older couple whose son had been killed in Afghanistan. The couple’s grandson, just a young kid, had heard about the weekend and wanted to do something to help. “So he went and handmade a couple of fishing lures. He wanted to say to the surviving veterans, ‘Hey, my dad was one of your compatriots and he’d want to be with you.’ Some of the boys are going to use it later and if they catch a fish, they know where it came from,” said Clarke.

“It’s an over-used word,” Clarke said of the weekend as it was wrapping up, “but it’s astounding. I’ve never seen a miracle cure, but I’ve seen some things up here that come pretty close. It’s becoming a big understanding family.”

As for the future of the event, Emmons has high hopes. “My hope is that we’ll be able to spread this. In Saskatchewan they named it an official holiday–Wounded Warriors Weekend. The hope is that maybe across Canada we may have wounded warrior’s weekend,” said Emmons. “I know we’ve saved some lives. And changed lives. The network that these wounded warriors have created has been amazing to see.”