Transformed By Being In The Right Place

Hannah Payumo, a Grade 12 student at St. Boniface Diocesan High School in Winnipeg, was a recipient of the 2014 Beaverbrook Vimy Scholarship. She and other Canadian student winners travelled to England, France and Belgium to tour and learn about Canada’s involvement in both world wars. The trip transformed her thinking on remembrance, and she is eager to share her story with other Canadians. See below for her thoughtful presentation. 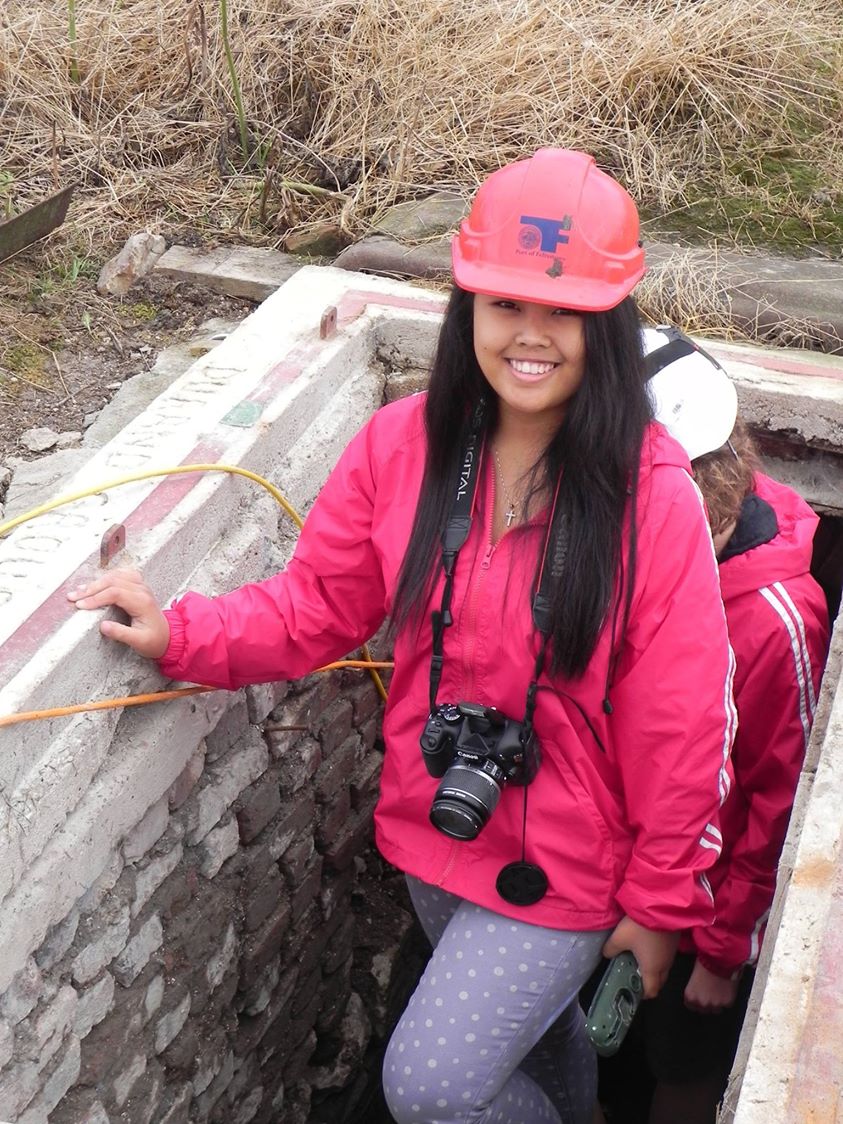 By now I think that a lot of you know why I’d be up here today, on Remembrance Day of all days. In case you didn’t know, my name’s Hannah Payumo and I was a recipient of the Beaverbrook Vimy Prize, a two-week scholarship trip to England, France and Belgium to study World War 1 and 2. Part of my job is to spread the word about the scholarship, and to keep history alive by sharing my experiences. And isn’t that what remembrance, and what Remembrance Day itself is about?

On Remembrance Day, we often think about the men and women that sacrificed their lives so that we could live freely. I know that having the honour to go on the trip this summer gave me a much different understanding of that. It’s easy to remember when you see a field of headstones, a veteran, or a museum. It’s easy to be zealous and passionate about history when you’re standing in the midst of it. It’s not easy when you’re just going about your day-to-day life and you’re caught up in the here and now. You don’t often think of how or why your life is as it is now. Personally, I’m guilty of doing that a lot. I get caught up in school, extra curriculars, family, friends, and just life in general, and I really don’t think about it as much. But every now and then, I do think about it. It helps a lot that I’ve been on the trip, because of the experiences I got to have, so to maybe help you remember, I’ll share a couple of things that I remember with you.

During the trip, I went to a lot of museums and cemeteries. They don’t seem like the most ideal places to take teenagers, but we all liked going to them just the same. When you go into a place like the In Flanders Fields museum and you see the faces of the soldiers, and you see their uniforms, and you read their stories, it hits you. When you go to a Commonwealth, American, French, or even German cemetery, it hits you again. These men were real. They fought for their freedom, and that of their families, communities and countries. They are so much more than just another statistic that you have to remember for the next History test. They all have a story tell. I remember that in the last cemetery we visited there were two brothers and a cousin buried side by side. When you see something like that it is absolutely heartbreaking because you know that they had families, and that they had so much more to live for. They probably signed up together, got on the boat together, trained together, fought together, and now they’re buried together. These men fought in the 3rd Canadian Battalion in the early stages of the Battle of Normandy and all three of them were in their early twenties when they died.

When I saw that they were so young, like in their teens and early twenties, it almost made me feel guilty. These men were at their prime. They were robbed of their families, their childhood, their homes, the girl across the street that they planned to marry after returning home a war hero. When you see them now, row after row of them, lying next to their comrades, you can’t help but think, “What a waste. What a waste of such young, and promising lives.” What they fought for, was it really worth it? Did Canada really have to lose 61 000 men? Did they die in vain? I thought about these questions a lot, but personally I’ve come to the conclusion that they didn’t die in vain. Their sacrifices are still felt today, and we still try to remember them.

Of everyone that I’ve ever met, there’s been one person that has taken remembering to another level. Her name is Joan, and I met her while I was in Dieppe on the anniversary of the Dieppe Raid. She’s 90 years old, cute as a button, and she’ll greet everyone she sees with a smile. Joan comes to the commemoration ceremony every year. Anyone could hear that and think that she may not have a lot to do if she can come down every single year for a one day, but there’s a reason why she does. Joan was married to her husband for two weeks before he was killed in the Dieppe raid. She didn’t even know that he had died until months later, but she was absolutely devastated. What’s really sad is that this wasn’t uncommon, and there are so many more war brides that have the same story. But despite what they went through, they’re still proud of their husbands and what they fought for. This was probably the last year that Joan will get to go to the ceremony because this year the only way she got to go was to sneak out of the nursing home since her son didn’t want her to make the trek. I got the feeling that the other Vimy kids helped make her journey worth it because all she could say was that she was so glad that the young people still care about the War. She gestured towards us and said, “The men died for them. So that they could live.” Since then all I could think was, we can’t lose sight of that. Not only did they fight for their families, they fought for the future. They fought for us, right in this room. 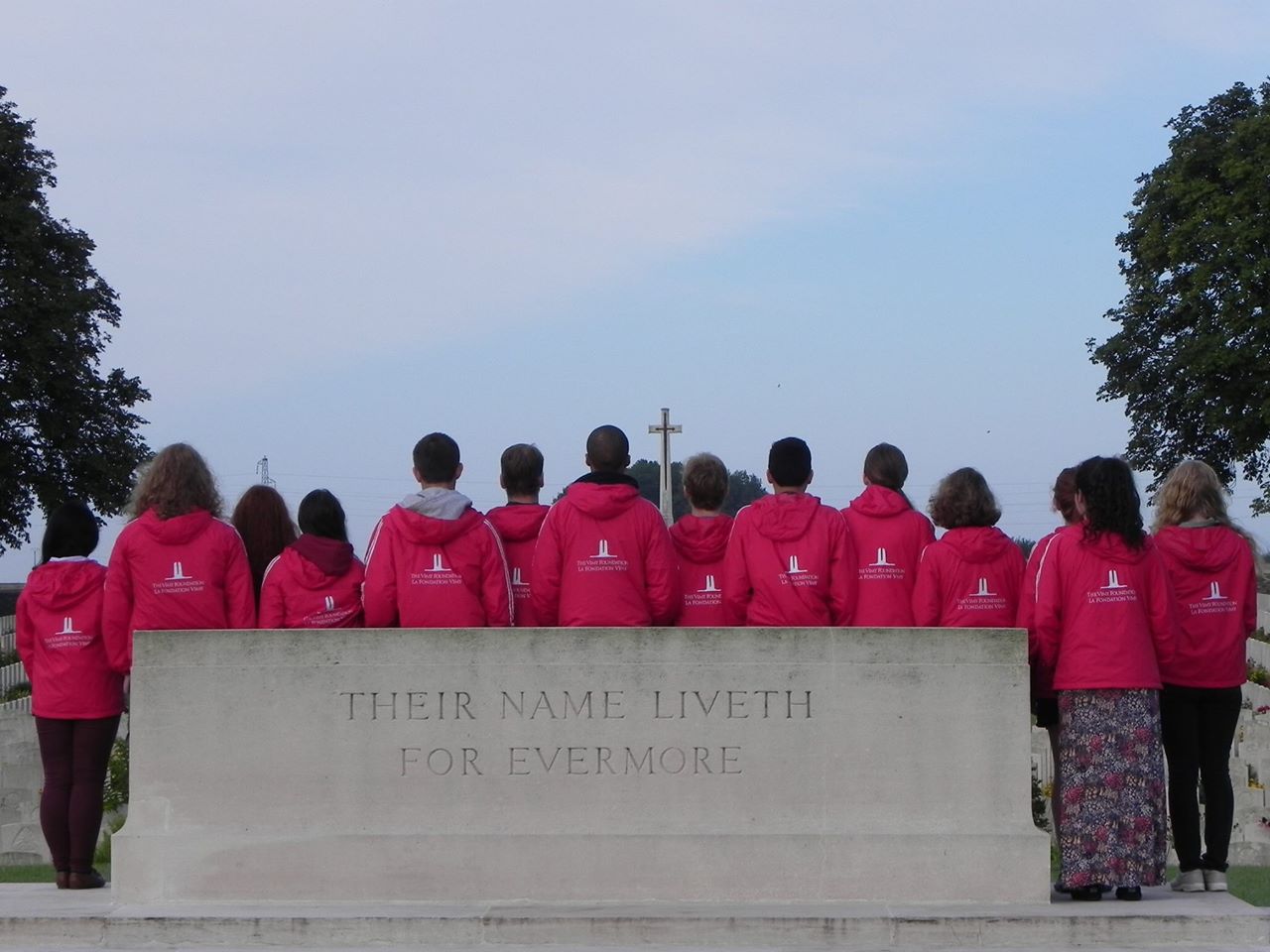