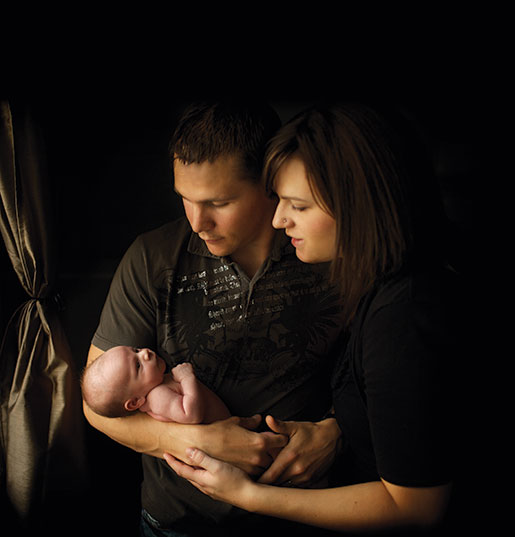 Almost three years ago the last Canadian soldier to die in Afghanistan was killed by a suicide bomber. In the long shadow of that sacrifice is a young mother trying to learn how to live with a lost husband and a broken heart.

It was early on Saturday morning in Morinville, Alta., and Lindsay Greff was exhausted. She was lying in bed, fast asleep with her tiny, two-week-old daughter Brielle sleeping beside her. It had been a long few days. Her six-year-old son Kellar was in bed asleep down the hall.

Lindsay was 26 and she’d been together with her husband since she was a teenager. Just a couple months ago they were finally married. He’d been there a few days before to see Brielle born.

Lindsay, asleep in bed, didn’t yet know her husband was dead.

It was Oct. 29, 2011. Canada’s war in Afghanistan wouldn’t be over for a few more years yet, but on that day the country lost its last soldier: Master Corporal Byron Greff, 28, Lindsay’s husband and the father of her two children.

Greff died in a massive suicide bomb attack aboard an armoured bus as he was crossing Kabul. He was trying to get back to his camp after returning to Afghanistan from his trip home to meet Brielle.

That Greff died in that attack is only one part of the story. There were two explosions that day, the one on Darulaman Road in southern Kabul and the one in a subdivision just north of Canadian Forces Base Edmonton, where Lindsay’s plan for her life also exploded. 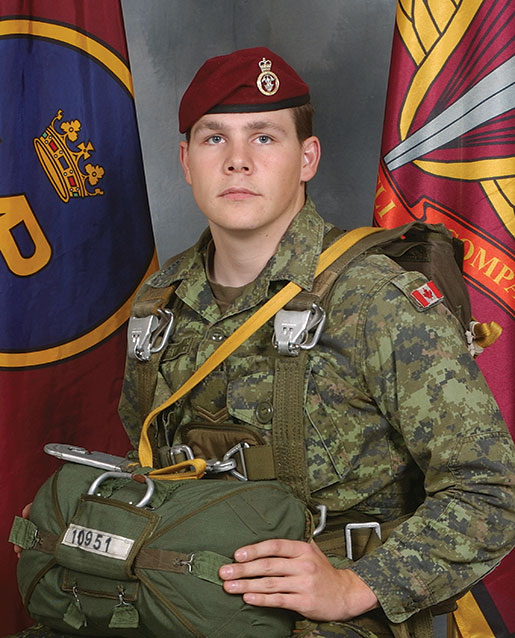 That morning, Lindsay’s mom came flying through her bedroom door and managed to communicate that military guys were at the door and something was wrong.

Lindsay shot out of bed so fast she worried about squishing tiny Brielle beside her. She raced down the hall, down the stairs and ran straight into Major Kevin Barry.

Lindsay didn’t know who Barry was, but she saw his military dress uniform and knew it had to be something bad. Her first thought was that Byron had missed his flight, or was in trouble for something or maybe that he was injured.

Barry stopped her by putting his arms out, placed his hands on her shoulders and looked her in the eye. “Byron’s been killed,” he said.

Lindsay stopped. She didn’t say anything. She walked across her living room and sat on the couch. She and Byron were married in that room a few days before he left for Kabul.

She saw her mom coming down the stairs holding Brielle. Lindsay was overwhelmed by panic. “Help me Mom,” she screamed. “Help me.”

For the first few hours, Lindsay refused to believe Byron was gone. She paced around the house, the officers and her mom following her. She was trying to find a way to contact Byron. If he was gone, she wanted to hear it from him.

“They were telling me that he’s dead,” she remembers, “I was desperately trying to find him to talk to him. Like there was just no way it could be true, you know? I needed to know from him in order for me to believe that he really was gone.” 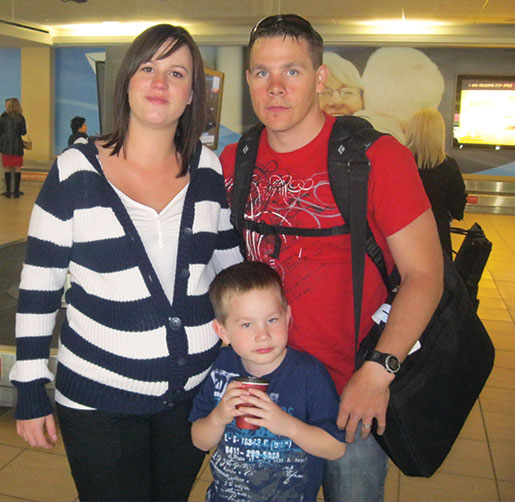 The next few hours wouldn’t get any easier for Lindsay. As she slowly began to grasp the fact of Byron’s death, she realized there were lots of other people who also needed to know.

She asked the officers to call Byron’s mom and tell her, but they couldn’t. That job fell to Lindsay herself.

When his mom answered the phone, Lindsay was crying too hard and couldn’t bring herself to say it.

“Byron’s been killed,” she finally cried.

Byron’s mom screamed into the phone; she screamed for a while as Lindsay cried.

Then Kellar came downstairs. Still sleepy, unsure who all these people were in his house, Lindsay just looked at the soldiers, pointed at Kellar and burst into tears again. She couldn’t believe she had to tell her son that his dad was dead.

Keller went straight to the closet and grabbed his paper and markers, sat down and began drawing. He drew a picture of the bus—of the accident they called it—with his dad in the bus. 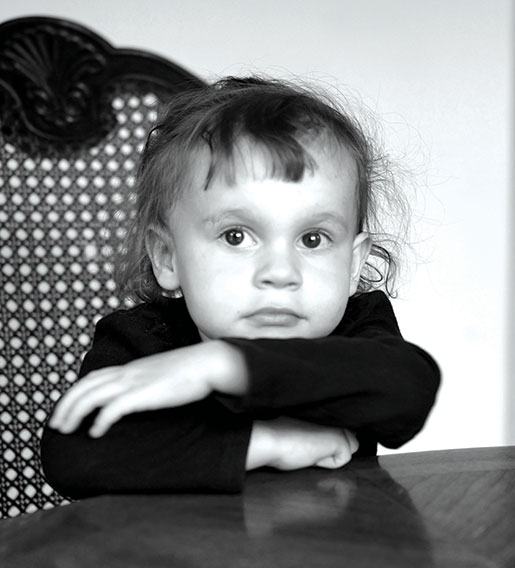 Brielle at home during the interview.
PHOTO: ADAM DAY

The first Canadian soldier to die by direct enemy action in Afghanistan was Corporal Jamie Brendan Murphy. He died on Jan. 27, 2004, in Kabul when his Iltis jeep was attacked by a suicide bomber. What he and Greff share, aside from being the first and last Canadians to die at the hands of the enemy, is that they both died just metres from each other on the same street in southern Kabul, Darulaman Road.

The armoured Rhino bus that Greff was riding on stood no chance against the hundreds of pounds of high-explosive stuffed into the waiting car. Alongside Greff, 12 Americans and four Afghans died in the blast, making it one of the deadliest single attacks of the war.

Master Corporal Steven Lavallee was one of Byron’s best friends and he was among the first Canadians on the scene after the explosion. “It was a mess,” he said. “It was pretty much chaos.”

While at the site of the attack, Lavallee didn’t know that Byron was on the bus. He knew Byron had arrived back from leave, knew he was trying to transit from Camp Phoenix down to where they lived at Camp Dubs, but didn’t expect him to be on the bus.

While it wasn’t unusual for Canadians to ride on that bus, they preferred to ride on their own in low-key convoys of up-armoured SUVs. “I didn’t find out until everything was done,” said Lavallee. “Some people knew, but I didn’t know until we got back to camp and that’s when the officer told me.”

Greff was a respected soldier, a standout in one of the toughest platoons in one of the Canadian Army’s toughest battalions. In the aftermath, many of Greff’s fellow soldiers began wearing maroon bracelets bearing his name and many of them still wear the bracelets today.

Major Kevin Barry—who was the commanding officer of the battalion when he notified Lindsay of Byron’s death—still wears his. “I put it on when they produced them and I’ve never taken it off,” he said. “I’ll never forget that day, it was the toughest one of my life.” 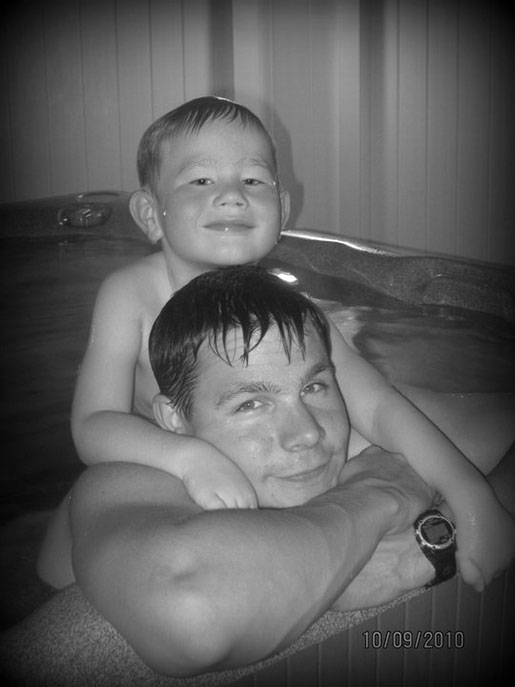 Life in the Wreckage of the First Plan

Grief is a strange and powerful force and its grip on Lindsay was strong, especially in those first few days.

“I would describe it as hell,” she said. “I mean, I don’t know what hell’s like, or if there even is one, but if there is one I was definitely in it.”

For a long time, Lindsay’s personal hell revolved around trying to find information that would help her understand Byron’s death. She was haunted by how little of him survived the explosion to return from Afghanistan. “I never got his wedding ring back, so I would actually go on Google and type in ‘Byron’s wedding ring,’ like hoping that somebody had posted somewhere about his ring, you know?”

Lindsay never found the ring. All she ever got back was a small bag of Byron’s hair.

“I got so much love and support from the world it was just amazing. But then that stops and you feel like the world just continues on. But mine doesn’t. It obviously does, but it doesn’t feel like it does. Everything’s crashing, everything stops and everyone else’s life keeps going.”

They were a strong family. Byron loved Kellar intensely, shaped his life around Lindsay and pulled all the strings in the world so that he could get home from Afghanistan to see Brielle born.

“I think there’s something that will never go away. That’s kind of where I’m at. But I just want it to go away because it hurts so bad. But the only way for it to go away is for Byron to come home, and that’s just something I know that I’ll just have to live with for the rest of my life.”

While Lindsay has in theory accepted Byron won’t be coming home, she hasn’t yet managed to let go. Her Facebook profile declares she’s married to Byron Greff, and his says the same of her. “I just cannot Facebook divorce him. I just can’t do it. I just can’t do it,” she said. “That connection we have on Facebook at least still exists even though it’s not true.”

Lindsay and Byron were together for their whole adult lives, an indivisible team of two now irreversibly divided. “A huge part of healing properly is doing something else, making a plan B because plan A didn’t work,” said Lindsay. “And right now I think I’m trying to make plan A still work.”

For Father’s Day this past June 15, 2014, Lindsay wrote a note on the Facebook memorial page set up for Byron.

We love you so very much and I am heartbroken every day that you can’t be here with me to watch the kids grow… Happy Father’s Day to one of the best daddies I know. We love and miss you always and forever XOXO.

“Byron’s grandpa died in an accident and his grandma died shortly after and Byron always said to me, ‘I swear that my grandma died from a broken heart.’ He said that to me many, many times and I was never sure if it was true. But now I totally believe that. If I wasn’t young and healthy, it would’ve killed me.”

Lindsay Greff on the possibility of dying from a broken heart. 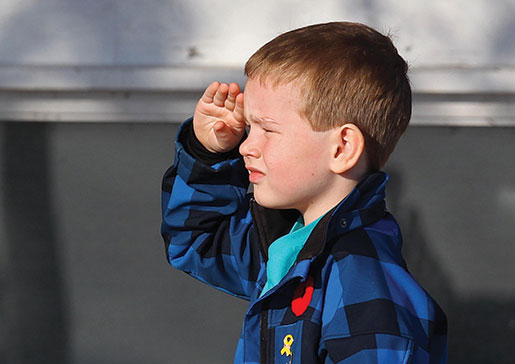 Byron was a career soldier on his second tour of Afghanistan but he viewed his military life as something separate from his family. It was a profession he was good at, but his family always came first.

At Byron’s funeral, Kellar was there front and centre, saluting his dad’s coffin. “He hurts,” Lindsay says, “he misses his dad, he craves that attention, but he doesn’t say too much.”

Lindsay does everything she can to keep him connected to his dad. One day Kellar “wanted something from Tim Hortons and they didn’t have it so I got him a peach drink instead, and I told him ‘they didn’t have what you wanted but this is Dad’s favourite drink, he got it every time he went to Tim Hortons.’ And then Kellar was so excited he was like ‘Oh, this is my favourite drink now.’”

As for Brielle, she’s grown into a rambunctious toddler. One thing that Lindsay is endlessly grateful for is that she and Byron posed for a portrait with Brielle just before he left, so at least she has one photo of them all together.

“It’s a little bit tricky with her right now because she thinks every man is daddy. All her little friends call their dads ‘Dad’ and she just right away is calling them ‘Dad’. So she calls a lot of people ‘Dad’,” said Lindsay. “I intend on teaching her, and I just am stuck finding exactly when it is appropriate. I think until she’s older and she can understand that all these people aren’t her dad, that her dad is Byron, she needs to be able to understand that first, because she doesn’t really know what a dad is.

Be With Us Yet, Lest We Forget

A few weeks before Father’s Day, a man broke into Lindsay’s house in the middle of the night. Lindsay knew someone was in the house. The kids were asleep upstairs. She went room-to-room looking for the intruder, eventually confronting him in the garage. The police came and it ended as well as it could have but it was a terrible situation. It’s easy to imagine there would be 60,000 or so armed soldiers who would want to protect Lindsay and the kids—would do anything to protect them—but there was no one there except her. 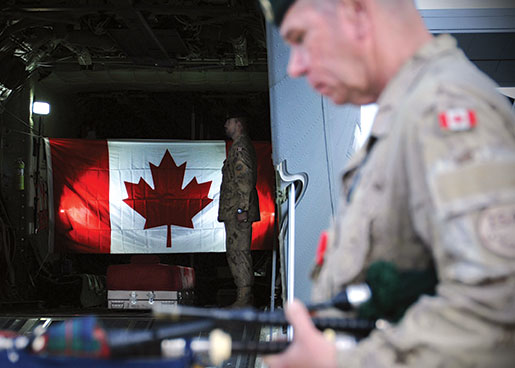