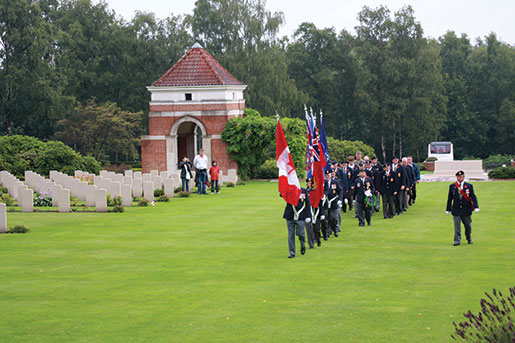 As 70th anniversary commemorations get underway for D-Day and the Battle of Normandy, it is important to remember that the majority of combat soldiers who fought in Northwest Europe in 1944 and 1945 only joined their units in the last eight months of the war.

By September 1944 the typical infantry battalion had lost two-thirds of its strength and was rebuilt with replacements. The 6,806 burials at Calais, Adegem, Bergen-op-Zoom, Groesbeek and Holten Canadian military cemeteries are a testament to the cost of the post-Normandy struggle to liberate Northwest Europe.

When the victorious Allied armies crossed the Seine River in late August 1944, many thought the German army was beaten and the war likely to end before Christmas. The optimists failed to consider the logistical nightmare that confronted Eisenhower’s forces dependent on supplies delivered to the Mulberry harbour and beaches of Normandy.

The crucial strategic challenge in the fall of 1944 was how to secure ports in France, Belgium and Holland that would nourish the armies as they pursued the enemy across the Rhine. Montgomery, who became a field marshal in early September, understood the dimensions of the problem but argued for a “single thrust” advance to Germany with all available resources to end the war in 1944.

Eisenhower, for both military and political reasons, did not agree but accepted Montgomery’s proposal to use the airborne army in what became Operation Market Garden, the plan to lay an airborne carpet into Germany. After the loss of the “bridge too far” at Arnhem, the Allies were forced to defend the deep salient they had created, drawing yet more resources away from the vital strategic issue—Antwerp and the Channel ports.

Hitler, determined to buy time, garrisoned the ports and ordered the defence of what he called Scheldt Fortress North, Walchern Island, and Scheldt Fortress South—the area known to Canadians as the Breskens Pocket. The task of liberating the Channel ports and the approaches to Antwerp along the Scheldt Estuary fell to 2nd Canadian Corps.

To understand the challenge confronting the Canadians you may wish to begin your battlefields tour at Boulogne, the first of the Channel ports liberated by the Canadians.

Operation Wellhit, the battle for the city, began on Sept. 17 after much of the civilian population had been evacuated. Prior to the battle, a spectator’s stand was built to give certain visitors a chance to witness 20th century siege warfare. However, naval, army and air force officers as well as press correspondents were told that 3rd Canadian Division, remembering earlier examples of misdirected bombing, “accepts no responsibility for spectators.”

Today a better view of the city and the battlefield can be obtained at Mont Lambert which in 1944 was the most heavily defended of the hills surrounding Boulogne. If you are travelling by car and want to get a good view of the city, exit A16/E402 onto the D341 east, turn right immediately on the Bois de Mont Lambert road. Many of the bunkers that protected the garrison attacked by the North Nova Scotia Highlanders have survived on the grounds of a building supply store, Rigail, a kilometre east on the D341. 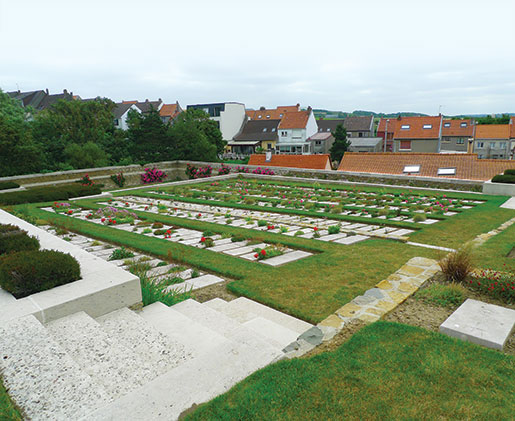 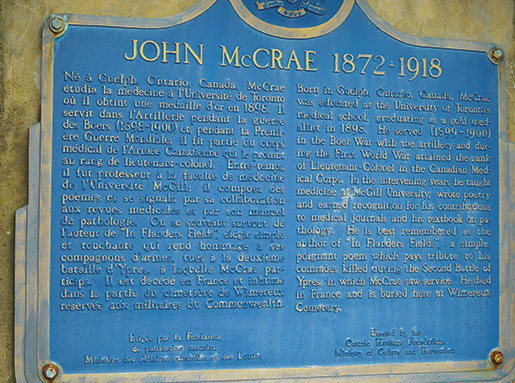 A plaque at Wimereux Communal Cemetery, near Boulogne, France, tells the story of the poem In Flanders Fields, and its author, Lt.-Col.John McCrae, who is buried here.
PHOTO: SHARON ADAMS, LEGION MAGAZINE

The citadel and walled upper city are now major tourist attractions. A plaque inside the citadel notes the position was captured with the assistance of an unknown citizen of Boulogne who led a company of the Stormont, Dundas and Glengarry Highlanders through a “secret tunnel.”

Before heading north on the D940 towards Cap Gris Nez, Canadian visitors often seek out John McCrae’s First World War grave in the communal cemetery at Wimereux. The cemetery also contains the graves of nearly 220 other Canadian soldiers and one nurse who died in the nearby base hospitals during the Great War. The view from the point at Cap Gris Nez is worth the drive. On a clear day you can see the White Cliffs of Dover on the other side of the English Channel. One of the cross-Channel gun batteries has been turned into a museum, Batterie Todt, which is full of German weapons and equipment. Two additional casements are located in the adjacent park.

The Calais Military Cemetery (exit 37 off the A16/E402) is on the east side of the Calais-Boulogne road, 14 kilometres from Calais. From the coast take the D244 to Saint Ingelvert and follow the signs. There are 674 identified soldiers and airmen buried here, most from the battles of September 1944. This is one of the least visited Canadian cemeteries. It is, of course, well-maintained by the Commonwealth War Graves Commission, but there is little local interest in or knowledge of the role Canadians had in the liberation of the region.

I recommend that your next destination be Bruges, Belgium, which you can use as a base for exploring the battles aimed at clearing the approaches to the vital port of Antwerp. Bruges is one of the most beautiful cities in Europe and a pleasure to explore.

The city was spared destruction in both world wars, though before the Germans withdrew behind the Leopold Canal, patrols from the Lake Superior Regiment penetrated to the ring canal, suffering both fatal and non-fatal casualties. Two days later, after the 10th Infantry Brigade outflanked the city at Moerbrugge, the Germans withdrew and elements of the Manitoba Dragoons and Royal Hamilton Light Inf. (RHLI) were greeted by cheering crowds.

There are two important Canadian memorials in Bruges. The Canadabrug or Canada Bridge features two magnificent Bisons—the symbol of the Manitoba Dragoons. It was erected in the memory of the Canadians who liberated the city on Sept. 12. You will also want to visit the Canadaplein, a small park on Smedenstraat with a memorial “To the memory of the Canadian heroes who died for the liberty and civilization.” Little attention is paid to either memorial today. Most passersby have only a vague idea of their meaning. 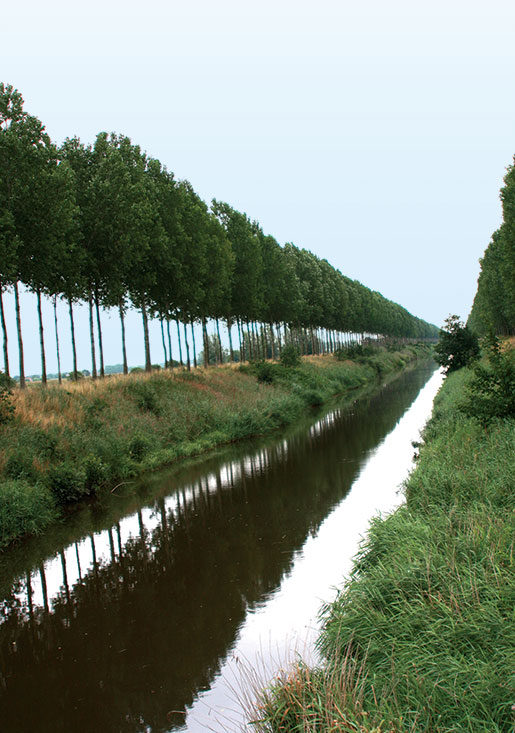 The Leopold Canal, near the Belgian/Dutch border, was reached by Canadian troops in October 1944 after the liberation of Adegem, Belgium.
PHOTO: SHARON ADAMS, LEGION MAGAZINE

Using the ring road R30 around the inner town, take the N9 to Adegem, where the Canadian war cemetery is located. There are 1,075 burials here, the majority from 3rd Canadian Div. The Canada-Poland Liberation Museum, a private venture created by Gilbert Van Landschoot, is located in Adegem and is well worth a visit.

Nearby are two key battlefield sites. Moerkerke, where the Algonquin Regt. attempted a hastily organized crossing of a double canal line in September, and the Leopold Canal battlefields just south of the border with the Netherlands. The tree-lined canals at Moerkerke are hauntingly beautiful. The small memorial is barely noticeable, but walking the ground allows you to understand the nature of the challenge confronting the infantry that day.

Operation Switchback, Canadian Lieutenant-General Guy Simonds’ innovative plan to clear the pocket of German resistance on the southern shore of the Scheldt estuary near the Belgian-Netherlands border, required the 7th Canadian Inf. Bde. to assault the German defences at their strongest point. This was a triangle of dry land surrounded by saturated or flooded fields. The enemy—six full-strength battalions of the German 64th Div.—were determined to defend the canal line, the road north to the town of Breskens and the gun batteries that prevented access to Antwerp.

The enemy responded to the attack as Simonds hoped, committing reserves to isolate the narrow bridgehead. When the second phase of Operation Switchback, an amphibious landing on the northeast coast of the Breskens pocket began two days later, the enemy was off balance, unable to prevent a rapid buildup which spelled certain defeat.

If you walk east along the canal’s north bank you will reach a large pillbox set into the bank. This is where machine guns, firing in enfilade along the canal, held up the companies of the Regina Rifles and Royal Montreal Regt. The position was finally overcome by a well-placed PIAT bomb projected from the south bank.

The village of Hoofdplaat, near Amber and Green beaches where the Highland Light Infantry of Canada and the North Nova Scotia Highlanders dismounted from their tracked landing craft, is where the annual Canada liberation march begins. Every November hundreds of Dutch and Belgian adults and children walk the 33-kilometre route of liberation to Knocke on the North Sea coast.

To visit Walcheren and the 2nd Div. battlefields north of Antwerp, use the N62 tunnel under the Scheldt. On our tours we begin in Westkapelle, where the Royal Marine Commandos landed in the large gap the Royal Air Force had created by accurate bombing of the dike. Walcheren is below sea level as is evident when you climb the dike to the memorial. Be sure and enjoy the fresh fish served from a stand at the foot of the dike.

Other major sites include the causeway memorial, the Liberation museum at Nieudorp and the village of Woensdrecht. The causeway or sloedam which joined Walcheren Island to South Beveland is no longer evident as the Dutch have transformed Walchern into an extension of the Beveland peninsula by reclaiming land. The A58 highway and railway track are on the old causeway and you can get a sense of the Calgary Highlanders battlefield from the memorial located on the road between Arnemuiden and Lewedorp. 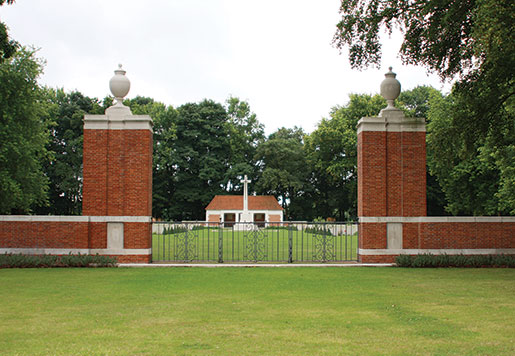 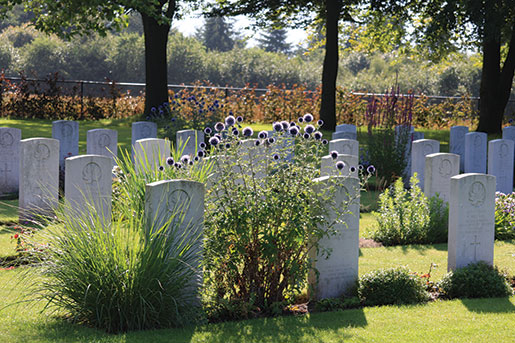 The Beurijdingsmuseum Zeeland presents a collection of artifacts related to the occupation and liberation of this province of the Netherlands. The volunteer staff is always thrilled to greet Canadians and the café offers a welcome break. The museum is well-signed once you reach Nieudorp.

Woensdrecht was the scene of one of the most complex and costly battles of the operations to open the port of Antwerp. The village is located on a sandy ridge which in this flat polder country offered every advantage to the defenders who included the elite 6 Parachute Regt. An attempt to bypass the ridge resulted in a second Black Friday for the Black Watch which was ordered to attack a railway embankment that gave the German paras an ideal defensive position.

After the failed attack of Oct. 13, the Royal Hamilton Light Inf. captured part of the ridge but the enemy continued to hold the sector until 4th Canadian Armoured Div. began to advance towards Bergen-op-Zoom, threatening to cut off the paratroops. There is a memorial to the RHLI in the village. If you continue to the western edge of Woensdrecht and take the underpass to the north side of the A58 you will confront the same railway embankment the Black Watch fought for and be able to study the reverse slope of the Woensdrecht Ridge.

The Bergen-op-Zoom Canadian War Cemetery and the adjacent British cemetery are well marked off the A58 east of the city. Bergen-op-Zoom was liberated by the Lincoln and Welland and South Alberta regiments. The Hotel De Draak on the main square served as the battle group headquarters. Today it is an upscale hotel with an excellent restaurant.

When my wife and I first explored the area in the 1980s we stayed there and found our dinner companions were David Currie, VC and his wife. Currie earned his VC in Normandy at St. Lambert-sur-Dives.

That was certainly a moment to remember.