In December 1939, Britain had undertaken to form distinct Royal Canadian Air Force squadrons overseas, manned as far as possible by Canadian graduates of the British Commonwealth Air Training Plan. By July 1940, with France defeated, Italy an enemy, Japan threatening and Britain itself threatened with invasion, the Royal Air Force was in desperate straits.

Suddenly, Imperial strategy and operational needs trumped national sensitivities. Thousands of Canadians were posted to RAF squadrons around the world. This was the origin of the RCAF’s Lost Legion, separated from Canadian units. It was also the genesis of disputes between Canadian authorities and their senior British counterparts, even when individual RCAF personnel fitted in well with RAF formations.

In the Far East, there were three RCAF squadrons present at various times. No. 413 Squadron, equipped with Catalina flying boats, was transferred to Ceylon in April 1942 and operated in many detachments until November 1944. Nos. 435 and 436 squadrons, which flew Dakota transports, supported XIV Army in its re-conquest of Burma from November 1944 to August 1945. However, as many Canadians flew in British units as in these three RCAF squadrons. 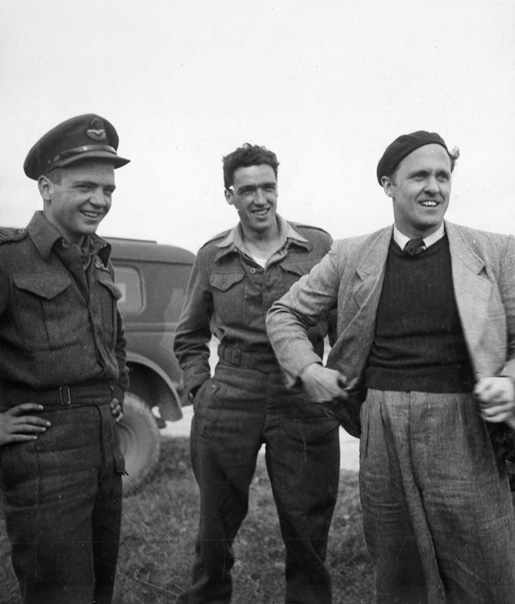 Wing Commander Robert Davidson (in civilian clothes) shown in September 1944 after evading capture in France. While posted with the RAF in the Far East, he was credited with two destroyed aircraft.
PHOTO: LIBRARY AND ARCHIVES CANADA—PL-32731/CANADIAN WAR MUSEUM—19650071-019_p11d

In 1976, the Department of National Defence published a small paperback, Canadian Flying Operations in South-East Asia, 1941-1945, by T.W. Melnyk. Today it is a collector’s item—and one of the best accounts of the RCAF presence in that theatre during the Second World War. The book gives an excellent overview of operations by the three RCAF squadrons there and has numerous mentions of the Canadian personnel who served with RAF units. Since then there have been numerous other works dealing with these people; mention of these will be made in coming articles.

Eight Canadian radar personnel had arrived in Southeast Asia in 1940 and by January 1942 there were at least 35 aircrew members of the RCAF scattered through British squadrons. This rose to 83 by April 1942. Additional Canadian radar staff were also arriving—347 had been posted to the theatre in 1941. Numbers mounted steadily. Accounting of their whereabouts was haphazard until June 1943, when an RCAF liaison officer was assigned to India to communicate directly with RCAF headquarters in London and Ottawa. The liaison office was quickly elevated to the status of a district headquarters.

The District HQ had no operational functions but dealt with administrative concerns—health, welfare, pay, promotion, casualty communications, to name a few. It reached its peak strength in June 1945 with 191 officers and men. This occurred just as the RCAF was reaching its maximum presence.

As of January 1945 there were 3,110 members of the RCAF in the region, including the members of Nos. 435 and 436 Squadrons. A report for May 1945 indicated there were 1,000 RCAF officers and aircrew in RAF squadrons alone, while some 700 more were in assorted headquarters, radio and radar units, repair sites and bases. 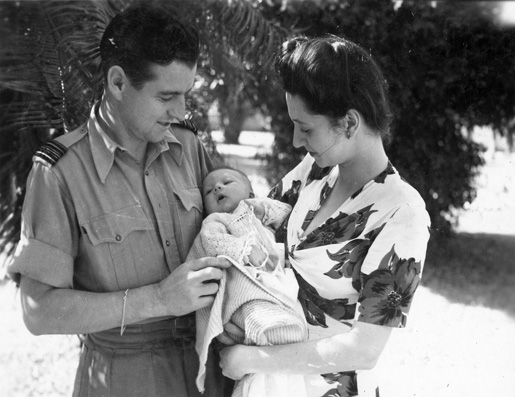 David Babineau, who was promoted to squadron leader, with his son David and wife Dorothy, February 1944.
PHOTO: LIBRARY AND ARCHIVES CANADA—PL-18834/CANADIAN WAR MUSEUM—19650071-007.p28b.tif

The first Canadians in the region were swept up in the disasters on 1941-42 as the Japanese overran Malaya, captured Singapore, occupied the Dutch East Indies and drove the British from Burma. During the war, 42 members of the RCAF became prisoners of the Japanese; 28 of these were captured between January and April 1942.

Initial Canadian aerial encounters with the Japanese were in December 1941, involving members of No. 205 Sqdn. at Singapore. On Dec. 24th two of their aircraft reconnoitered for an enemy invasion fleet. One was shot down by fighters; the navigator was Pilot Officer David Babineau of Rouleau, Sask. The flying boat burned before the dinghy could be saved. Six men with Mae West life preservers supported three comrades who had no such gear. They were 11 hours in the water before being rescued by a Dutch submarine.

Flight Sergeant Robert Bonnar of Ottawa piloted another Catalina of No. 205 Sqdn. By the end of January 1942 they had been driven out of Singapore, and soon afterwards from Java, too. His subsequent war included mail runs between India and Australia, flights of 21 to 28 hours one way. Bonnar flew some special missions along the Burmese coast, landing agents with their radios. Although he had the chance to transfer to No. 413 Sqdn., his loyalty to crew and squadron kept him in No. 205 Sqdn. until the end of his tour.

Antiquated Vickers Vildebeest biplanes constituted the bulk of Singapore’s torpedo bomber force. They were quickly eliminated when Japan attacked in January 1942. One member of the RCAF, Flt. Sgt. George Ewen of Toronto, a navigator with No. 36 Sqdn., was killed in action in a Vildebeest on Jan. 26, 1942. The objectives were Japanese ships establishing a beachhead north of the city and the attack was virtually a suicide mission. Ewen’s name is recorded on the Singapore Memorial which commemorates casualties in that theatre who have no known grave.

Royal Canadian Air Force pilots flew some of the Hurricane fighters that tried to defend Singapore against overwhelming odds. When the time came to evacuate, some were lucky and others were not. Sgt. (later Flying Officer) Rudy Mendizabal of Sarnia, Ont., reached Sumatra, but faced imminent capture. He teamed up with a Dutchman, two Australians and a New Zealander. At an airfield they found two damaged Lockheed 212 transports—one missing the tail, the other with the wings intact. As if following a movie script, they patched the wrecks into a single airplane that was barely flyable—and then flew it in stages to Ceylon, alighting to refuel at the few pockets of territory still in friendly hands. They reached Colombo on March 11, 1942. 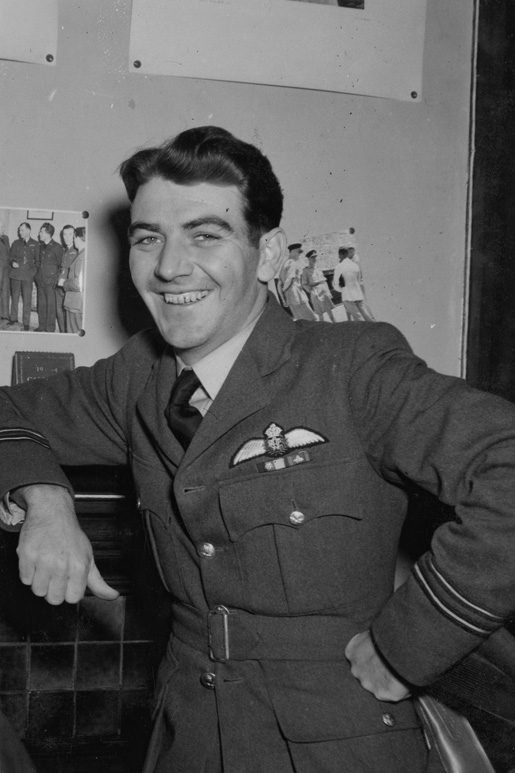 It took more than a year for the story to break in the Toronto Telegram newspaper of April 10, 1943. Mendizabal was killed in a flying accident on Aug. 10, 1943, while piloting a Hurricane of No. 5 Sqdn. His three Commonwealth companions also died in wartime service. Sergeant Stuart Munro, RAAF, in Queensland on May 21, 1942; Sgt. Alan B. Martin, RAAF, in New Guinea on Aug. 27, 1942; Sgt. (later Flying Officer) Douglas Jones, RNZAF, at Rabaul, Jan. 9, 1944. Their Dutch comrade, Frederik Pelder went on to fly B-25s, entered postwar Netherlands civil aviation, and died in The Hague on Sept. 19, 2000.

Warrant Officers Russell C. Smith of Kamsack, Sask., and Howard P. Low of Vancouver, pilots in No. 607 Sqdn., had also flown Hurricanes to Sumatra but both were captured. On or about April 15, they broke out of their stockade and found an airfield which had at least one captured, but apparently serviceable aircraft, variously described as a Hudson bomber or a DC-2 transport. Smith and Low reached the cockpit, but were unable to start the engines. Both men were captured again and shot.

Pilot Officer John P. Fleming of Newboro, Ont., a Hurricane pilot with No. 232 Sqdn., managed to shoot down one Japanese aircraft over Malaya, but was shot down in turn. It took him six days to regain his unit. He, too, evacuated to Sumatra, but was captured. Fleming lived dangerously; he and a British NCO kept a clandestine radio in their camp and distributed news whenever possible. Discovery of the radio would have entailed severe punishments and even death.

Heroism was also exhibited by non-flying personnel. Flying Officer (later Squadron Leader) Branston W. Martin of Kingston, Ont., was among the first Canadian radar officers present. As of December 1941 he was commanding a radar station on the east coast of Malaya, 100 miles north of Singapore, dealing with technical teething problems and tropical conditions. His radar unit plotted the first Japanese raid on Singapore, giving almost an hour’s warning of its approach.

By Jan. 15, 1942, the enemy had advanced to within half a mile of the station, now subjected to repeated low-level machine-gun and bombing attacks. It continued to function until orders to withdraw were received. All the secret equipment was then removed intact, although most of the personnel were suffering from malaria or dengue.

By Feb. 9, 1942, the station was operational again on Singapore Island itself, but had to be abandoned in the face of the continued Japanese advance. Martin ensured that no equipment fell into enemy hands, even returning with a volunteer party to an area partly occupied by Japanese to destroy another radar installation. As of Feb. 12 he had another station operating on the southeast side of Singapore Island. This, too, had to be destroyed and abandoned. Martin eventually escaped from Singapore. His bravery and determination were recognized by the award of an Order of the British Empire in October 1946.

As defeat piled upon defeat, the British had to choose what to defend and what to abandon. Burma was given up after a fighting retreat. The Japanese had now attained most of their objectives, including severance of the Burma Road to China. In April 1942, the Imperial Navy thrust into the Indian Ocean, intent on destroying British sea power. Contrary to contemporary belief, they had no intention of invading Ceylon. Their ships were detected by Catalina aircraft of No. 413 Sqdn., newly arrived in the theatre. The warning enabled most of the British fleet to avoid a direct confrontation with the enemy, although two cruisers and a small aircraft carrier were caught and sunk. Hoping to draw the Royal Navy into unequal battle, Japanese aircraft attacked the naval bases at Colombo on April 5 and Trincomalee on April 8.

Japanese A6M Zero fighters completely outclassed the Hurricane and Fulmar fighters that defended Ceylon, and on April 5, the score was 19 British aircraft shot down as against seven Japanese machines, although RAF claims were higher. On the 8th, RAF fighters claimed 24 enemy aircraft shot down; the actual number was 10, some shared with anti-aircraft guns, while nine British machines were destroyed.

There were approximately 20 Canadian pilots in Ceylon in April 1942, and several made claims that may or may not have been accurate. Flight Lieutenant Robert Davidson, a Canadian in the RAF, was credited with two destroyed at Colombo. He had previously destroyed German and Italian aircraft. Also at Colombo, Flying Officer James Whalen of Vancouver was credited with three Japanese dive bombers destroyed; the previous year he had shot down three German fighters. At Trincomalee, Sgt. (later Flight Lieutenant) Cleo Gauthier of Kirkland Lake, Ont., reported damaging three dive bombers before he was wounded and crash landed.

PrevPrevious ArticleHumour Hunt
Next ArticleOn This Date: April 2014Next