It was January, 1945, and bitterly cold. We were prisoners of war struggling along a snow-covered road in Czechoslovakia. Some had been in prison camps since the fall of France, others like myself since the Dieppe raid. Now the Germans had us on the move to keep us from being liberated by the fast-moving Russian army. Already we had crossed the Oder and Elbe rivers and the Sudeten mountains.

The nervous German guards, their faces dark under their helmets, herded us on with shouts, curses and blows.

Some were left along the road side; sick men who could not carry on. They lay where they fell, and that terrible winter reached out and embraced them. Stronger men, who had sworn they would stick it out, also lay there, their bodies riddled by bullets from Allied planes.

American bombers moved in this area in the light of day, Canadian and British by night, and Russian fighter-planes at anytime. The roar of propellers, the hammering of machine-guns, and the crash of exploding bombs sent prisoners and guards alike scrambling for cover in the ditches. Anything that moved was fair game.

The road ahead led unendingly into the night. I felt drowsy and my gait became mechanical. I thought of houses with people lying in warm beds not worrying about the snow falling outside. The man in front of me, one of the survivors of my regiment, walked with drooped shoulders. The snow fell on his head and on his bent back.

The column stretched for miles. Dead men lay on both sides of the road. The snow had settled over their uniforms making it impossible to see whether they were allies, Germans, or in the striped uniform of the Jew.

The thought of escape was never far from my mind. Artillery flashes and rumbling from the direction we had come told us the Russians were not far behind. Perhaps I could make my way back?

My chance came one evening after nearly two months of marching. It was now March 3rd, 1945.

The barn where we were to sleep this night was surrounded by a stone wall, eight feet high, inclining to twelve feet at the gate. Guards were posted and a search light on the back of a truck made ready. Rumour had it we would get hot soup, the first hot food in three days. The men were excited by the prospect.

I made up my mind. This was the place, the time, during the confusion that always accompanied the soup issue. I thought of the hot soup, but consoled myself with a vision of the food I would get from the Czechoslovak people.

Someone shouted, “Soup up”. Men ran in every direction. Some ran to hold a place in the line, others to the barn for mess tins. It was dark now. The sweeping ray of the search light moved back and forth along the wall. At intervals the beam played on the long line of hungry men, then back to the wall.

The light moved slowly, from left to right. I intended to go over the wall on the left, at its lowest point. I watched the beam of light on the wall. I would make my move when it reached the center. Now, I thought and I moved to the left. Then something went wrong. A guard came running straight at me, rifle thrust out in front. He went on by me, towards the soup line. A fight had started there. Because of the disturbance another guard was placed by the wall near where I had chosen to go over.

As I stood there thinking about it, a German soldier went by carrying over his right shoulder a huge fork full of hay. I fell in step on his right. The hay shielded me from the guards. I prayed he would not shift it to his other side. He didn’t and I walked through the gate and around the end of the wall. I crouched close to the wall for a few minutes, then walked swiftly past the Germans in their wagons, on out of the area. If all went well, I would have seven or eight hours before being missed.

I kept to the road, walking fast, diving into the ditch when anything approached. Just before daylight I left the road and plodded through a muddy field patched with snow towards a clump of trees on a hill. From here, through the grey dawn, I could see the outline of a small village. Exhausted and hungry, I picked a house off by itself, then curled up on the ground and waited. I dozed off, and perhaps an hour went by. When I looked at the house again there was a thin trickle of smoke coming from the chimney. I was startled to see, to the left of me and further along, a small airfield, and the shapes of planes huddled together, a sentry walking among them.

I made my way to the house and knocked at the back door. It was opened by a plump, middle-aged woman in a flowered apron. She did not seem surprised and, motioning me inside, shut and locked the door. From the depths of a huge cupboard she produced a bottle of schnapps, a loaf of bread, and a chunk of fat pork. She sat and watched as I ate, smiling happily and talking in her own language. I ate, drank, and I talked in a mixture of German and Polish. I could not stay long. This woman was putting herself in great danger should the Germans find out she had helped me.

When I was ready to go she became agitated, gesturing, pointing, and making signs with her hands, indicating airplanes. I had learned how to say thank you in many languages, and I used all of them now, as I tried to assure her that I knew there was an airfield close by, and that I had no intention of going in that direction. I left the house, moved to the right towards some thin pines, keeping to this cover for about a mile where the pine broke into a clearing. Just below in an open field was a straw stack. I would hole-up there until evening.

A sign was posted at the gate leading into the field. Several more like it were posted around the fence. Two words of the sign that I interpreted readily were, “forbidden and dangerous”. Everything is forbidden and dangerous, I thought, as I burrowed well into the straw stack. It was warm and comfortable. I was soon asleep.

Several times I was awakened by the drone of airplanes. But I came wide awake when I heard the rattle of machine-gun fire. I crouched, trembling. A plane swooped low over the stack, spattering bullets in the straw. The first was followed by three more, then only the sound of their receding motors. I waited a moment, then ran out of the field, towards the woods beyond.

As I went through the fence I noticed the sign again. Then I understood what the woman in the house was trying to tell me. I was numb as I stood in the woods and watched the German planes circle and come back to the practice target. I headed back in the direction of some hills and some time later I made my way into a town that had been taken and held by the Russians.

The sun was shining. What was left of the winter snow was fast melting. A Russian officer with a big smile shook my hand. From his tunic pocket he took a silver cigarette case and offered it to me. He spoke in English.

My eyes filled with tears, as I puffed on the strong Russian cigarette. The war was finally over for me. 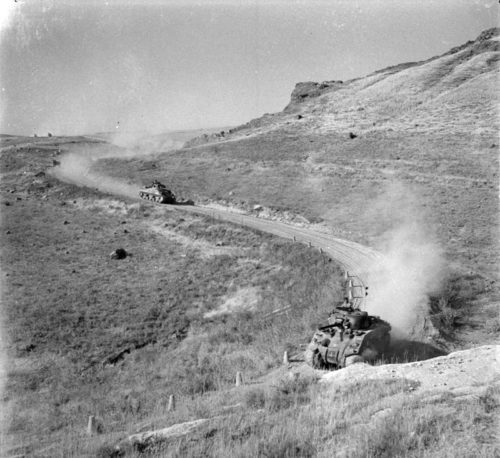