Instead of being able to talk with his father about the Second World War, Duncan learned of his father’s experience with the Royal Canadian Corps of Signals through a diary he kept. “I only found it after he passed away,” said Duncan, who spent 13 years in police services. 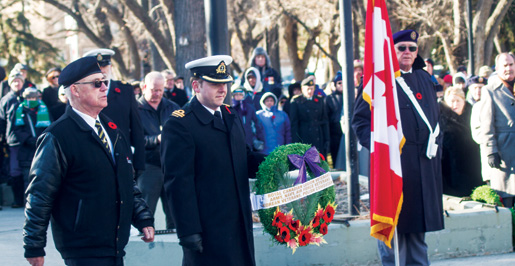 “I met Dave Ewart who was with the Calgary Tanks. My father had been assigned to them and it turned out Dave had been everywhere my father had been. There were tears in his eyes. There were places even he had forgotten about until he read my father’s diary. If they weren’t there at the exact same time, they were only a day behind.”

Sharing stories after the Remembrance Day service has been a long tradition in Regina. This year was different because the Legion branch—where a lot of the stories are shared—was closed for renovations. When it reopens it will be much smaller, but thoroughly modern.

The old building, which was roughly 20,000 square feet, was built when Regina Branch, the only Royal Canadian Legion branch in the city, had a membership to support it. It had a reception area for weddings and other special events that helped generate branch income, but the cost just to keep the doors open was $25,000 a month, explained Duncan. 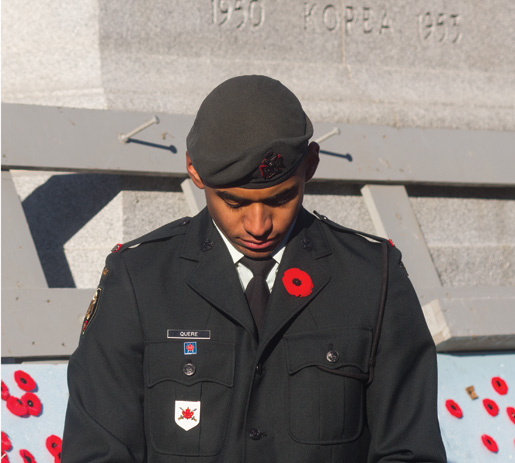 The branch will become a tenant in the new building, where it will operate rent-free for 10 years and pay half the going retail rate in perpetuity after that. Most importantly, the branch will keep the original facade, which has been declared a heritage property. The facade’s impressive Memorial Tower, which was completed along with the rest of the building in 1947, features five stained glass windows unveiled in 1955 by Governor General Vincent Massey.

But even without a home base for this year’s Remembrance Day services, Regina Branch maintained its tradition of organizing two simultaneous services. One was indoors at the Brandt Centre. The other was outdoors at the First World War cenotaph that features an image of The Brooding Soldier found on the St. Julien Memorial in Belgium. Every year since 1926, ceremonies have been held here, regardless of the weather. 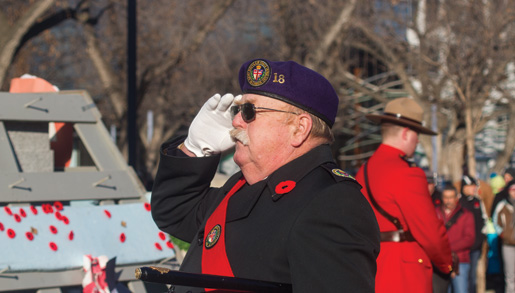 Brown’s wartime memories are from his father who served with the Royal Artillery in North Africa. “He went away when I was five months old and didn’t return for five years,” said Brown, who grew up in Glasgow, Scotland.

Remembrance Day, this year, was bitterly cold. The temperature was -20 C with a prairie wind making it feel like -26 C. The indoor service attracted approximately 6,000 people, while roughly 500 attended the outdoor service.

The city, which was gearing up to host the Canadian Football League’s Grey Cup, was also preparing for football fever. The veterans’ parade, which usually formed at the branch and marched directly to the cenotaph, had to wind around the temporary fencing and scaffolding erected for the expected football parties. 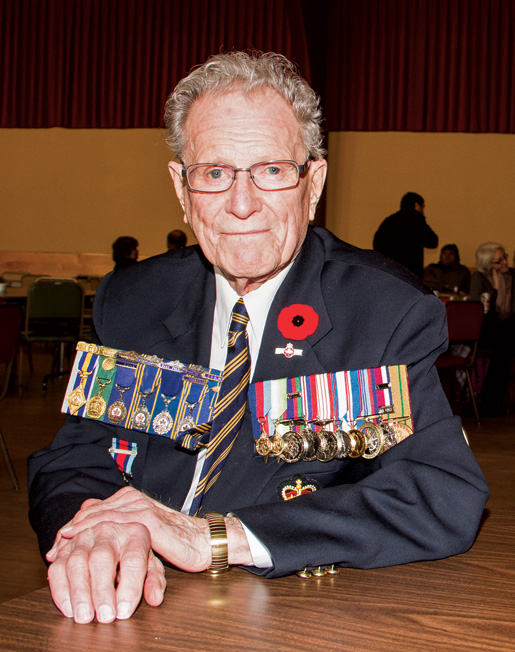 The outdoor service was led by Navy Lieutenant James Balfour, a naval reserve chaplain. “Every day in Ottawa when the big bell sounds the 11th hour, a page is turned in the Books of Remembrance in the sacred chapel inside the Peace Tower… During the year each name of Canada’s fallen from the world wars, the Korean War and other campaigns will be on display at least once,” he said.

Styrofoam boards with pegs were placed around the cenotaph so organizations and individuals could place wreaths. Since the Northwest Rebellion of 1885, more than 11,000 people from Saskatchewan have died serving their country. 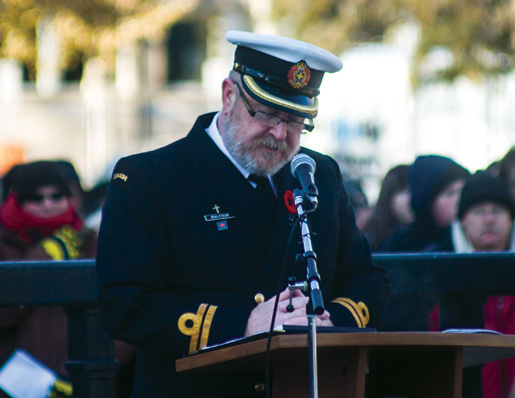 Christine Brown, Ian Brown’s wife, placed the first wreath in memory of Canada’s Silver Cross mothers. She was followed by representatives from government and various veterans’ organizations, and individuals.

Following the singing of the royal anthem, Balfour invited people to place their poppies in the Styrofoam among the wreaths. From the cenotaph, many headed to the rented hall for a hot lunch and other refreshments. Among them was Harold Hague, a former Regina Branch and Saskatchewan Command president who served in the Royal Canadian Navy. “I served on corvettes, destroyers and minesweepers,” he said.
“I was with the 31st Canadian Minesweeping Flotilla. On D-Day we were sweeping along Omaha and Utah beaches for the United States forces.” The veteran also recalled that he was training for deployment in the Pacific when the war ended. “I was glad to get out of uniform.”