As I approach my eighth decade, I think of him as my Sergeant Pilot. I know he neither is nor was any more mine than the moon or stars, yet there is something so profoundly personal in the fact that he wished the best for me. And all things considered, my life has been one that I would not exchange for any other. If that is not the best, what is?

In 1942, World War II was in its third year and Quebec City was alive with a variety of young men in uniform. They would come to the city on leave from army, navy or air force bases and would crowd into YMCA dances, stroll on downtown streets, attend churches and be invited into homes. My friend Audrey and I were two Quebec high school seniors about the graduate.

Doug Simmons and Bill Heaton were air force, Royal Air Force from England. Their English accents were a never-ending source of fascination, imitation, laughter and glee for Audrey and me. It was Audrey who made first contact with them at a garden party organized for the men who had recently received their wings in preparation for Ferry Command. I only remember that on the day after the event I was in her parents’ living room, being introduced to two young men who were sitting side by side on her piano bench.

While Bill was neatly dressed in his summer uniform, Doug’s uniform had a slightly rumpled look as though he had slept in it, and his tie had spots where mustard might have squeezed out of a hot dog he had been eating. When he removed his cap, an unruly strand of black hair fell over his right eyebrow. Doug was thoughtful, quiet, shy, sad and in need of cheering up. I resolved to do just that. I guessed his age to be 20 or 21. My heart went out to him and I fell in love on the spot.

Barely 16, sensitive to criticism and wanting to avoid adult disapproval, I decided to pretend to the world that entertaining Doug was just one more patriotic duty. Meanwhile, I listened in rapt attention as the boys and Audrey exchanged views about the war. When I saw my chance and felt on solid ground, I stuck in my oar to test the waters. Doug looked at me with surprised respect. 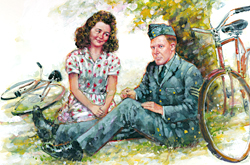 That is the only piece of direct-Doug dialogue I am able to recall. It was an exclamation he used often, but it did not affect our ensuing friendship. No one dared say “damned” in our house…”darn” maybe or “drat”, but never “damn!” Still, he had said I was right, and that was heady stuff for someone all too used to put-downs from an older brother–an older brother who was overseas.

Anyway, Doug had noticed me and I was hooked.

The boys talked about gremlins, little creatures that monkeyed with aircraft functions, fouling things up. No one thought to explain what a gremlin was, I was too shy to ask and felt dumb not knowing. Audrey, however, knew instinctively, and one day at school she handed me an amusing drawing she had done with a caption that read: This is a gremlin. I laughed.

I had noticed that Doug seemed to be very much in awe of gremlins. Maybe this is how I developed the feeling that he had a premonition of his demise which he neither wished nor dared to talk about.

Getting to know him was a challenge, one I pursued until he began to drop me notes that explained what he was doing or when he could see me again. These notes, short and to the point in a backhand scrawl, were consistently signed, “All the best, Doug.” Of course, I looked between the lines for some sort of indication of reciprocity for my crush. There was none.

During one of his leaves, the two of us cycled out beyond city limits into the countryside, enjoying the warm sunny afternoon and the scent of new-mown hay. Before turning back to the city, we pulled off to a shady nook to rest. Doug sat on the grass beneath the same tree that supported his bike. He leaned back against the tree and then stretched his legs out in front. I watched him pull up a piece of grass and stroke it between his thumb and fingers. I knelt on the ground beside him with my weight resting on my heels, hands in my lap. My bike lay on the ground–wheels spinning. I could see his right profile, but his gaze was far to the left. Even though I could have reached out and touched him, I wondered if he was back in England already, so deep was the ocean between us. I longed to have him tell me what was on his mind.

I wondered what was going on in there. What feelings was he hiding? Surely it wasn’t anger. Was he lonesome? Thinking of a girl? Gremlins? Was he afraid he was going to die? The only question I dared ask was, “Do you ever get lonely?”

Later that day we went to the movies. Doug held my hand through the whole show. This put me on cloud nine–in seventh heaven, but deep down inside I knew something, but what?

There were various family misfortunes in 1942, one being the tragic death of Jack, my sister’s husband. I can picture my mother hanging up the phone after hearing the news. “That was Barbara,” she said in a voice filled with emotion. “Jack’s plane crashed at the end of the runway, on takeoff from Dorval airport. Everyone was killed.”

Barbara and Jack had been married less than three months, living in Montreal while Jack finished his basic training. His squadron was on its way to its first posting.

Barbara reacted to her tragedy by enlisting as a nursing sister in the air force. While waiting to be called up in January 1943, she came home to spend Christmas with us. Afterwards, while packing to return to duty, she handed me a newspaper clipping from the Montreal Gazette and asked, “Is this your friend?”

The “something” had surfaced, right there in black and white newsprint. The headline read: Casualties: Sgt. Pilot Douglas P.C. Simmons, RAF.

Doug was dead; killed, presumably in a plane crash in Newfoundland. Newfoundland seemed so far away in those days. I was shocked and stunned. In a way I was prepared for it but not quite so soon.

I crumpled the newspaper clipping. Our last night together had been his goodbye. Even if he had known, he could not have said he was leaving. I did not cry in response to the terrible news. Instead, I sat down and wrote to his mother, telling her everything I could think of about the good times we had had, and what a wonderful person her son was…trying in all innocence to comfort her.

In time, a reply came from Mrs. Simmons, and I put its terseness down to British reserve or grief. Eventually, a second letter arrived, beginning: “My name is Joyce. You do not know me, but it was so kind of you to write to Doug’s mother and as Doug’s fiancée, she showed me your letter.”

Well, that explained some things but not all: What about Doug’s premonition? The rest of the letter told how he was active in Boy Scouts, other bits of information. The best part to me was when she said: “You mentioned that you thought Doug knew he was going to die. I think you are right. I too believe he felt that way.”

This was faint satisfaction, but my intuition had been corroborated.

Later on, we learned she had married and gone to New Zealand to live. I was happy she had moved on.

In September 1942, I had started Grade 12 at the high school. Somewhere between December, when Doug was killed, and May 1943, I was doing badly in algebra, arguing with my math teacher about its lack of logic. I remember ending up in a hapless mull of tears I could not or would not explain. Poor Mr. Rivard.

Next day, I was questioned by my mother about the incident.

“Perhaps,” she said, “you have been feeling overwhelmed after learning what had happened to your friend?”

I shook my head and fought back the threat of fresh tears.

From there I moved on.

Also in May 1943, my parents relocated to a country place and I went to live with Audrey and her parents, until the end of June.

In July, Audrey joined the air force and I joined my parents in their new home. In the fall, I entered university where I met the Maritimer I married a year after graduation and from there I became a New Brunswicker.

In 1970, having had little contact with Audrey since the end of the war, I was surprised to find a letter in my mailbox from Hobart, Tasmania. The letter was from Audrey filling me in on all her doings since last we met. In 1995, she returned permanently to Victoria, B.C., and our exchange visits became annual affairs.

Although I never mentioned him, I had not forgotten Doug, and he was a special part of my remembrance every Nov. 11th.

In 2003, Audrey and I were still up for adventure. She drove to Newfoundland that summer and picked me up in New Brunswick to accompany her to the Rock. Audrey needed material about Conception Bay for the memoirs she was writing. To reach the bay we had to drive across Newfoundland from Channel-Port aux Basques to St. John’s, and in so doing, passed through Gander.

While approaching Gander I saw signs announcing a Commonwealth War Graves Commission cemetery. Surprised at my own bravado, I shouted to Audrey who was driving, “Audrey! Remember Doug Simmons? He was killed in Gander. He may be buried here…do let’s stop.”

Across the road from the Gander war cemetery, we entered a tourist information centre where a young man was of great assistance. He pulled a file containing a list of names from his files. It was sad to see Doug’s name, but at the same time I was relieved and excited. The young man showed me a plan of the cemetery, circling plot number, row number and the number of Doug’s grave. He made two photocopies of each of two sheets.

Jubilant, I returned to the car where Audrey waited. I gave one of the copies to her and kept the other. The papers told us Doug was 21.

It was off to the site to begin our search.

About a 100 graves were in the small area with no indication of which plot was which. We wandered around in different corners, reading names and looking for a correlation between the papers and the tablet-like headstones marking these final resting places, each with its own sad story, no doubt. Suddenly, his headstone was right in front of me with his service number, rank, name and initials. There was RAF and 6th Dec., 1942. Beneath all, a simple cross and these words:

To live in hearts we leave

behind is not to die.

Until we meet again.

It hit me with the force of a cannonball…of course…that’s where he’s been all along…in my heart.

Later, in the privacy of my home, the full impact of this moment swirled around me, unleashing the grief so long buried beneath the rubble of my busy life. I was destined to repeat the tears that had so baffled my math teacher, this time with a difference…I knew what my tears were about.

We have met again, Doug and I, and I know where he is living.