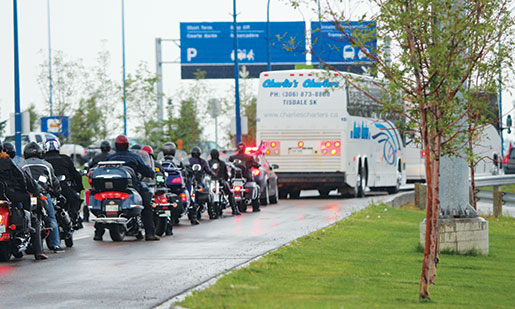 Joe Rustenburg was on the edge of a crisis when he attended his first Wounded Warriors Weekend in Nipawin, Sask.

He ended 12 years of service in the Princess Patricia’s Canadian Light Infantry, which included tours to Afghanistan in 2006 and 2008, with post-traumatic stress disorder. He took some counselling, and thought he might build a new career with the Royal Canadian Mounted Police. But he lost it during a first aid training video, the graphic images triggering PTSD symptoms.

“I panicked,” he said. “I just fell apart, started a spiral like I was a paper airplane that got wet and just started crumbling.” He retreated within himself. “It’s safe.  Being within yourself, at least you find peace. It’s easier just to turn everything off. To turn off emotion, to stuff everything.”

He credits attending the Wounded Warriors Weekends held in Nipawin in 2012 and 2013, with helping him to pull out of his shell. The big thing was camaraderie. Meeting others who were going through the same thing, he found it easier to reach out.  “It opened my eyes,” said Rustenburg. “Not only was I not alone, but people actually do care.  I mean…it’s one thing to say it and another to do it.”

The experience widened his horizons, agrees his wife, Melanie. “He used to keep to himself, now he has friends all over the world. He has more people to reach out to.”

The Royal Canadian Legion and Wounded Warriors Canada have collaborated to put on Wounded Warriors Weekend (WWW) two years in a row, giving wounded veterans a chance to experience camaraderie in a nature retreat and socializing in a welcoming community. The Legion provided volunteers and the funding to cover veterans’ transportation and accommodation. Wounded Warriors identified the veterans. Nipawin and other Saskatchewan communities provided the welcome and support, food and entertainment.

The weekend is the brainchild of singer-entertainer Blake Emmons, who splits his time between Saskatchewan and Nashville, Tenn. “Watching Remembrance Day ceremonies and the vigils along the Highway of Heroes, it struck me that we do so much for those who made the supreme sacrifice,” said Emmons, “and so little for those who are still with us.”

Emmons served in the 1960s with the Royal Canadian Air Force, then joined the U.S. Air Force, flying observation aircraft during the Vietnam War.  He also lives with PTSD. Being in the wilderness helped him, and he believed it might help other veterans, too. He contacted the mayor of Nipawin, Nipawin Branch of The Royal Canadian Legion and Wounded Warriors Canada, “and it grew from there,” said Emmons, WWW co-director and Saskatchewan co-ordinator of Wounded Warriors Canada.

In 2013, more than 180 veterans from Canada, Australia, Great Britain and the United States, some with spouses, families or caregivers, came to enjoy a free extended weekend of fishing, golfing, musical entertainment and socializing. In 2012, more than 80 veterans attended.

Veterans arriving at Regina International Airport were met by a piper and Legion colour party, attended a reception with Lieutenant-Governor Vaughn Solomon Schofield, then travelled the 300 kilometres to Nipawin by cavalcade, with a motorcycle escort most of the way. Members of the public came out and cheered the cavalcade as it passed by.

Hundreds of Legion volunteers from across the province worked
on the event, said Verda Hoppe, WWW co-director and president of Nipawin Branch. “At least a dozen branches were involved,” she said, holding fundraisers, hosting meals, staffing colour parties and honour guards, providing transportation
for veterans and their families, lining the cavalcade route, riding as motorcycle escort and turning out
to welcome veterans. Nearly $30,000 was raised, notably by Lloydminster and Rosthern Branches, and there were many gifts in kind: posters from Club du Souvenir, caps for veterans from the Legion’s Dominion Command, food for meals, use of private cars for transportation.

“It’s unlike anything I’ve ever seen—the whole community came out,” said Jason Johns, a wounded veteran from Madison, Wis., who lives with PTSD. He enjoyed the 2012 event so much, he attended as an unsponsored participant again this year. “The show of appreciation and, and…love—it’s really humbling. It helps with healing.

“You never feel more alone than when you get back to the civilian world,” after leaving the services, Johns said. “You’ve lost the camaraderie, you’re trying to get back into your old life, and 99 per cent of the population doesn’t understand. It helps a lot to be able to sit down with others who say ‘it is what it is and it’s OK.’ Little by little, bit by bit, it gets better.”

The weekend was also an emotional outlet for the community, said Hoppe.

Lacking a large military installation, “we seldom see regular forces at all and we don’t get a chance to do anything very often for new veterans. This is their welcome home. Finally they can feel there is appreciation for what they’ve done.”

Dominion Past President Pat Varga said the veterans were really impressed by the cavalcade. “People lined the streets in small towns, and veterans were really touched when farmers came out to the end of their driveways along the highway in the middle of nowhere and waved a flag.

“It was all volunteer effort,” said Varga. People were happy to volunteer their boats, their cars, their time. When the college, where some veterans were staying, needed linens, blankets and pillows by the dozens appeared within days.

The welcome is especially important for reservists, says Brenda Fredrickson, of Elrose, who organized the cavalcade from Regina
to Nipawin, “The reservists don’t come back to a base. This gives them a chance to network with people who are going through the same things. We can’t possibly understand what they’ve been through but we can show them that we care.”

The weekend “is no miracle,” says Fredrickson, “but it is a beginning. I do believe it changes lives. One veteran said to me ‘There were no parades or parties for me when I came home from Bosnia. Now I feel I’ve been welcomed home.’”