The Wolf Pack Attacks: The Battle For One World War Two Convoy 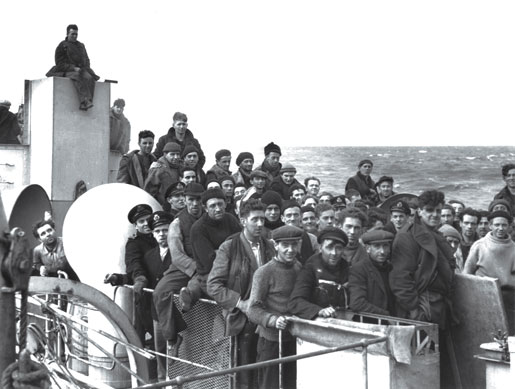 Merchant seamen crowd the upper deck of HMCS Shediac. The men were rescued after their respective ships were lost in the battle for convoy ONS 92 in May 1942.
PHOTO: COURTESY MARC MILNER

German Admiral Karl Dönitz seized an opportunity in the spring of 1942 when he sent a Wolf Pack—a group of U-boats—into the mid-Atlantic against a slow-moving convoy. The convoy’s escorts could not rob Dönitz of success.

When looking at the Atlantic war in the spring of 1942, historians tend to focus on the carnage that occurred in North American waters, and not so much on the dreadful situation facing convoys and their escorts in the middle of the Atlantic.

Out there, U-boats en route to North American waters had bumped into transatlantic convoys, and so it made sense for German Admiral Karl Dönitz to learn more about the routes the convoys followed, and the quality of their escorts.

Dönitz tested the mid-ocean defences in early May by grouping U-boats in transit into a temporary Wolf Pack. He suspected, rightly, that the Allies were saving time and escorts by sticking to the Great Circle route—the most direct line across the North Atlantic. That made them easy targets, and the first test was so successful that Dönitz kept the group together and harried the main trade routes for a month. Although in the end Allied losses were modest, the battles confirmed the vulnerability of the main convoys, and—for the British—their lingering suspicions about Royal Canadian Navy operational effectiveness.

The first transatlantic convoy intercepted in May by Wolf Pack Hecht was ONS 92, a slow, 42-ship convoy headed for Halifax. The escort was A.3, the last nominally American group in the mid-ocean, led by the USS Gleaves, the United States Coast Guard Cutter Spencer, and the Senior Officer, Escort Commander J.B. Heffernan of the United States Navy. The rest of A.3 was Canadian: the corvettes Algoma, Arvida, Bittersweet and Shediac.

Unfortunately, A.3 possessed no High Frequency Direction Finder, although a set was carried by the rescue ship His Majesty’s Ship Bury, and only Bittersweet—British-owned, but RCN operated—was fitted with modern 10-cm type 271 radar. The SOE had exercised A.3 prior to its departure from Londonderry, so the group was trained, and, by the standards of the day, ready. 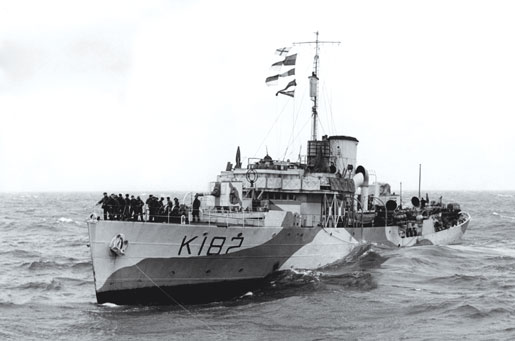 HMCS Bittersweet about to be taken in tow, May 1943.
PHOTO: COURTESY MARC MILNER

Dönitz had wanted to keep Wolf Pack Hecht tightly controlled until it was fully on station and ready for operations May 14, but a chance encounter between ONS 92 and U-569 on May 11 set the battle rolling. On that day, Bury’s HF/DF operators plotted three U-boat contact reports as U-569, U-124 and U-94 settled in around ONS 92. The Admiralty warned the SOE that day that three U-boats from Wolf Pack Hecht had sighted the convoy, and that five more were moving in.

The information of U-boat contact reports put the SOE on the horns of dilemma. Ideally he ought to have pushed out high-speed HF/DF-directed patrols to drive off each U-boat as it made its sighting report—that’s what Bury’s captain expected him to do—and at the same time order the convoy to take evasive action. But the SOE did neither. He had only one destroyer, Gleaves, while the rest of his group, including Spencer, were too slow to run a U-boat down or drive it off. Gleaves was also the SOE’s ship: taking her away from the convoy would remove the SOE from the battle.

The SOE may also have had little faith in the information from Bury. No ship in the USN was yet fitted HF/DF, and in any event it took two sets to get a proper fix by triangulation on the transmitter. Bury picked up U-boat transmissions on the ground wave, which gave bearing and—given the nature of the contact report itself—implied a distance of around five miles. But Bury could not provide a ‘fix’ in the real sense of the word.

So the SOE did not pursue the first plotted contact reports on May 11. Instead he followed standard USN escort doctrine. He took Gleaves and Spencer on an offensive sweep ahead of the convoy that afternoon in hopes of clearing a path for ONS 92 and, with luck, making contact with some of the U-boats. The sweep paid off when a U-boat, probably U-569, was spotted. The SOE pursued that contact to the north with both his ships, launching a series of depth-charge attacks until the early hours of May 12. Meanwhile, the four RCN corvettes of A.3 settled in around ONS 92 for an uncertain night, at least two U-boats were still unaccounted for, but they did not have long to wait for action to begin.

Shortly after midnight U-124 approached ONS 92 from the port (southern) side and put torpedoes into two ships in the outside column: Empire Dell, a 7,065-ton ore carrier fitted with a catapult and an old Hurricane fighter to assist in air defence, and Llanover, a 4,959-ton general cargo vessel. Both were travelling in ballast, and the crew of both quickly escaped, only two crewmen from Empire Dell were lost. Bury and Shediac did the rescue work while the three remaining RCN corvettes fired illumination around the convoy in hopes of finding the attacker. Nothing was seen, and as the rescue work continued, ONS 92 plodded on, screened by only three Canadian corvettes.

The SOE had turned Gleaves and Spencer back towards the convoy at high speed as soon as the attacks started, but he was unable to reach ONS 92 before the next attacks. First U-94 found the convoy and sank the 5,630-ton Cocle, a Panamanian general cargo ship, with the loss of four lives. Shortly afterwards U-124 made its second pass of the night through the convoy, sinking Mount Pares, a Greek steamer laden with good Welsh steaming coal destined for Montreal, and the 5,389-ton Crystales carrying mail, general cargo, and nearly 100 passengers and crew. Four crewmen perished from Mount Pares, while 82 were saved from Crystales after the ship was abandoned. She was eventually sunk by the escort.

By the time the SOE returned to the convoy, five ships had been hit and his Canadian corvettes were largely engaged in rescue work. The Canadians had had only two fleeting glimpses of the enemy. Bittersweet, while stationed on the port beam of the convoy, obtained a fast-closing-radar contact on a reciprocal bearing only a half mile away. Thinking it might be Arvida returning to her screening position, Lieutenant-Commander J.A. Woods, Royal Canadian Naval Reserve, ordered Bittersweet to take avoiding action. As she did so, a U-boat slipped past her portside, too close and much too quickly to engage. The U-boat was not seen again. 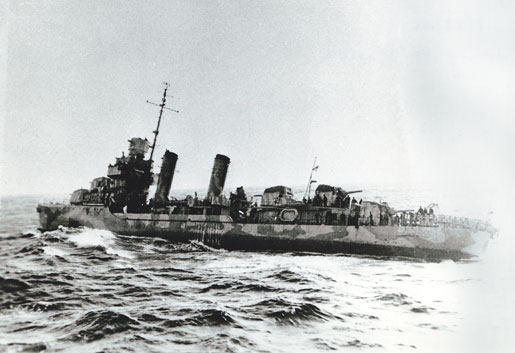 Meanwhile, Arvida sighted one of the attackers but abandoned the chase to conduct rescue work.

The next day, May 12, went much better for ONS 92 and its beleaguered escort. Gleaves and Spencer pushed out on the flanks to try to keep the U-boats at bay. Spencer drove down two and Gleaves raced in to join the hunt. Both American ships lingered over the horizon again until well after dark to keep the U-boats from surfacing and closing the convoy. To help shake off the pursuers, the SOE ordered two large evasive turns to the south, taking the convoy into bad weather—and into the path of U-94.

In a strong wind and crashing sea, U-94 torpedoed two ships in the early hours of May 13. No one, except the unfortunate sailors on the merchant vessels, initially noticed. The Batna, a 4,399-ton British coal carrier bound for Halifax, sank, taking one of her 44 crewmen with her. The 4,471-ton Swedish ore carrier Tolken did not go down without a fight. When U-94 moved towards Tolken’s lifeboats—intending to take the ship’s captain prisoner—gunners still aboard the stricken steamer opened fire and drove it off. All of Tolken’s crew were rescued.

These sinkings by U-94 brought an end to losses from ONS 92, although its ordeal lasted two more days. Dönitz finally called off Wolf Pack Hecht on May 14, pleased with the results of his mid-ocean experiment. Seven ships had been sunk, with no loss to the attackers. From his point of view, it appeared that North Atlantic convoys were easy to intercept and easy to attack. He decided to keep Hecht operational and see what else could be done.

The SOE, too, was pleased with the outcome. He commented candidly in his report that on occasion he “did not know what was happening and neither did the convoy commodore,” but presumed this was “probably the usual situation.” However, A.3 had been busy throughout its passage, and the rescue work was superb. The SOE concluded, “The COs of all the escorts are entitled to credit for a highly satisfactory performance.” Rear Admiral Leonard Murray in St. Johns, Nfld., largely concurred with this.

The battle for ONS 92—small and vastly overshadowed by catastrophic events that month in the Gulf of Mexico—would be a mere footnote to the history of the Atlantic war if the British had seen events the same way the SOE’s and Murray’s staff did. Instead, the passage of ONS 92 created a firestorm of scorn from Western Approaches Command staff in Liverpool. As noted in my 1985 book North Atlantic Run, both the convoy commodore and the captain of HMS Bury were sharply critical of the SOE’s conduct. Bury’s captain commented that the failure of the SOE to act on specific HF/DF contacts “may well have contributed greatly to the loss of valuable lives and ships.” The commodore, for his part, concluded laconically that Gleeves was never there when ONS 92 was attacked.

The Staff Officer, Anti-Submarine, at Western Approaches Command (WAC), Commander C.D.H. Howard-Johnston—never one to mince words—wanted to confront the USN directly over the SOE’s conduct. Being active and aggressive was not enough: it was the SOE’s job to know what was going on. Captain R.W. Ravenhill, the deputy Chief of Staff (Operations) at WAC preferred to hold criticism of the USN, saving it until the Americans said something derogatory about the RN and then firing back. While this smouldered, word trickled up the USN chain of command and the SOE was shifted to another job. He ended the war as captain of the USS Tennessee.

Far more important to the fate of the RCN was Cmdr. Howard-Johnston’s reaction to the Canadian component of A.3 and to the formal comments from Murray and his staff on the battle. Simply put, Howard-Johnston deeply disliked both. Arvida should have dropped a raft for the men in the water and pursued her U-boat contact. And while Bittersweet stepping aside to let a U-boat into the convoy “was bad enough,” the fact that Murray and his staff considered she had taken the right course “was awful.” The Canadian corvettes of A.3 had focused too much on rescue work and too little on the enemy. Clearly neither the RCN escort force or its senior staff had improved much—if at all—since the previous fall.

PrevPrevious ArticleDid You Know Service Officers Can Help You?
Next ArticleLetters From The Bowes Brothers – June 2, 1917 Somewhere in France,Next