Home » Our Veterans » News » Aboriginal Role In War Of 1812 Recognized

Aboriginal Role In War Of 1812 Recognized 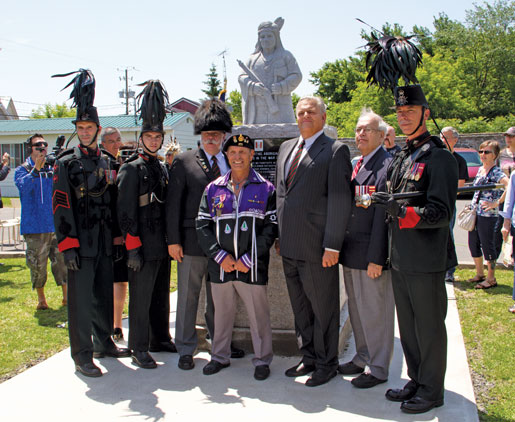 Mohawk Branch President Louis Stacey (centre) stands with members of the Voltiguers in front of the monument.
PHOTO: TOM MACGREGOR

The important role played by aboriginal warriors during the War of 1812, particularly the Mohawks, has been commemorated with a monument unveiled June 21 in Kahnawake, south of Montreal.

Organized by Mohawk Branch of The Royal Canadian Legion, the unveiling was held on Aboriginal Day and featured a Legion colour party, costumed dancers and native singing.

Events began with a parade from the branch to the town’s cenotaph, directly across the street from St. Francis-Xavier Church, the shrine of Kateri Tekakwitha who was canonized as a saint in 2012 by Pope Benedict XVI.

“In June of 2012, which marked the 200th anniversary of the War of 1812, Kahnawake was one of several First Nations communities to receive a commemorative medal and flag which was presented by Canada on behalf of Her Majesty the Queen, in recognition of the Caughnawaga Mohawks participation in the War of 1812,” said Mohawk Branch President Louis Stacey. “Canada would not exist today had the American invasion of 1812-15 been successful. During that time of war the Mohawks of Caughnawaga fought alongside the French Canadian Voltiguers as allies with the British Empire against the American invasion. Their combined efforts and brave heroism formed the foundation for what eventually became the independence of Canada.”

The ceremony also features members of the Voltigeurs de Quebec who fought with the Mohawks at the decisive Battle of Châteauguay.

The ceremony began with prayers and a dance by Ray Deer and his son, Bright Cloud.

Among those bringing greetings was United States Consul General Andrew Parker who praised the people of Kahnawake for contributing so much to the U.S. military and as steel workers on the high-rise buildings of New York.

The monument features the image of a Mohawk warrior, modelled on branch Sergeant-at-Arms Eric Bush. A plaque reads in English, French and the native language: “Mohawk warriors fought alongside British Soldiers and Canadian militia in all theatres of war and were the deciding factor in many battles.”

Along the sides of the monument are the names of 73 warriors who served with distinction. The names were found on orders of battle, military summaries of the actions in which those who distinguished themselves are mentioned, explained Christin Zachary, a teacher and lawyer who has researched the history of the band.

Zachary said that the Mohawks distinguished themselves in three important battles during the war, the battles of LaColle in 1812 and Châteauguay and Beaver Dams in 1813.

The names of the warriors were solemnly read aloud as the monument was unveiled. “It was important to read the names during the ceremony,” said Zachary. “We believe that when you say a name that person lives again.”

Other ceremonies took place across Canada recognizing Aboriginal Day, including a wreath-placing ceremony in Ottawa at the National Aboriginal Veterans Monument.

PrevPrevious ArticleLetters From The Bowes Brothers – June 6, 1917 Somewhere in France
Next ArticleThe Cork In The Bottle: Canadians And Poles At The Falaise GapNext