Home » Health » The Dog—And Horse And Cat—Days Of Summer

The Dog—And Horse And Cat—Days Of Summer 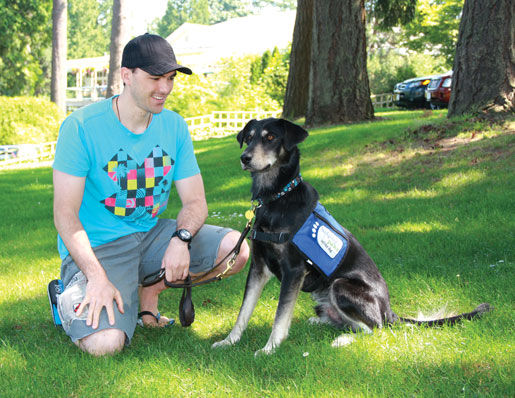 Companion animals and service animals are now pretty familiar to Canadians. They help and support people with physical or mental challenges to go about the tasks of daily living. Now it’s been discovered that animals can help in therapy for such conditions as post-traumatic stress disorder. Dogs, cats, horses, llamas—even dolphins—have been used in therapy sessions.

The Mayo Clinic says animal-assisted therapy “can significantly reduce pain, anxiety, depression and fatigue in people with a range of health problems.”

West Coast veteran Paul Farrugia, who has post-traumatic stress disorder, credits his service dog Perry for bringing him out into the community. A handler whose sniffer dogs detected explosives and weapons in war zones like Afghanistan as well as victims of the 2004 tsunami, Farrugia found he couldn’t turn it off once he came home. He’d search the house before he went out, and examined every nook and cranny when he returned. He even booby-trapped the place.

Friends supported him to seek help, but even after most of his symptoms were under control, he still found himself anxious when he left home. “I was just happy to sit with my pension and just do nothing for the rest of my life.” (Shoulder to Shoulder, January/February). Then his mother-in-law suggested he get a service dog. “I went from doing nothing to getting up early for morning bathroom breaks and feeding,” he said “It really helped me to get into a routine.”  And to get on with his life. His confidence was so bolstered that he agreed to an interview with Legion Magazine in a busy restaurant, Perry lying all the while beside his chair, close enough to put a reassuring head on Paul’s leg when his emotions rose as he told his story.

Such results have sparked programs in many countries to provide veterans with service dogs, and research to provide evidence it’s worth investing public money in such programs. The U.S. Army Medical Department Journal devoted a whole issue to 16 stories about animal-assisted healing, from simple pleasure of their company to stress management and mental and physical therapy.

Veterans Affairs Canada has thrown $50,000 behind research into the benefit of using animals to assist veterans dealing with mental health issues. St. John Ambulance, whose therapy dog teams provide 180,000 hours of national service annually, and Alberta-based Can Praxis have each been given $25,000 to further research into benefits of animal-aided therapy. The benefits of their programs will be measured by researchers at McGill University in Montreal and the University of Saskatchewan, respectively.

Can Praxis, based in Rocky Mountain House, Alta., has just completed a pilot project employing horses to help veterans and their families cope with post-traumatic stress disorder.  The Canadian Foundation for Animal Assisted Support Services, kick-started with a $25,000 grant from True Patriot Love Foundation, has established The Major-General Lewis MacKenzie Fund to make sure veterans, serving military members and their families can get animal-assisted support when they need it.

There are more and more services for non-military Canadians, too. The Canadian Service Dog Foundation has information about service and therapy dogs, animals for emotional support and educational outreach. The National Association for Equine Facilitated Wellness trains and certifies therapists in the use of horses, mules and donkeys in their practice. Concordia University College of Alberta offers a program in animal-assisted therapy for psychologists and mental-health practitioners.

Humans are now also taking medical advantage of animals’ keener senses, like  a dog’s sense of smell, which is up to 100,000 times more acute than a human’s. They have 300 million olfactory receptors in structures behind their noses (humans have about six million), their receptors work continuously, not just when they breathe in and out, and more of their brain is devoted to analyzing smells than in humans.

Dogs can detect some odours in parts per trillion—a sense of smell so keen it can detect the difference in body chemistry accompanying dangerously high or low blood sugar levels, oncoming seizures, colds and flu. Some dogs can even detect some forms of cancer, picking up on aromatic compounds produced by tumours.

PrevPrevious ArticleHealth File: Welcome To The Sneezin’ Season
Next ArticleCollateral Damage: Families In The Wake Of WarNext