The Havoc Continues: Closing In On Falaise

While the Canadians fought towards Falaise, the Americans—to the west—were advancing more quickly. By the evening of Aug. 8 it was clear the Germans had failed in their attempt to cut off General George S. Patton’s 3rd U.S. Army with an attack through Mortain to the Normandy coast.

The next day, with elements of 3rd U.S. Army advancing virtually unopposed towards Paris, the Supreme Allied Commander, Gen. Dwight D. Eisenhower, agreed to try and trap the German armies in France by turning American divisions north to Argentan, a town just 20 kilometres south of Falaise.

General Bernard Montgomery agreed to this dramatic modification of his master plan, but did not change the boundary separating the American and Anglo-Canadian Army Groups. On Aug. 11 he ordered the Second Canadian Corps, which was still 12 kilometres north of Falaise, to capture Argentan as well as Falaise. Montgomery’s decision made little sense. The Canadians confronted a well-organized enemy that had just been reinforced with a fresh, full-strength infantry division. While the British, Canadian and Polish battalions of First Canadian Army were under strength and uncertain after three days of intense combat, the American divisions approaching Argentan from the south were still on a roll.

Patton understood the situation facing First Canadian Army and urged his corps commander, Major-General Wade Haislip, to capture Argentan and then move slowly north to meet the Canadians at Falaise. Haislip had two armoured and two infantry divisions available and much of the rest of 3rd Army to call upon if necessary. However, at the last moment the American Army Group Commander, Gen. Omar Bradley, ordered Patton to observe the American and Anglo-Canadian boundary and allow the Canadians to close the gap. Bradley later said he preferred “a solid shoulder at Argentan to a broken neck at Falaise,” but on Aug. 13 Patton and Haislip were confident they could trap the German divisions caught in what people were beginning to call the Falaise Pocket. Bradley’s real reason was the need to avoid conflict with Montgomery who was still the overall land forces commander. Montgomery had established the boundaries and only he could change them. 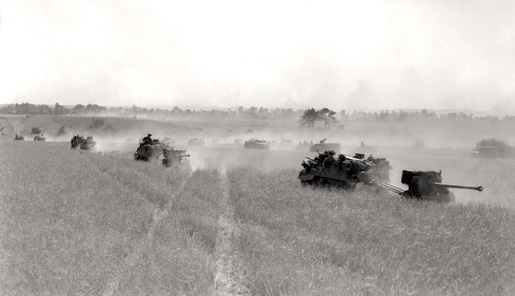 Vehicles from the 3rd Canadian Division kick up dust as they advance near Bretteville-le-Rabet.
PHOTO: DONALD I. GRANT, LIBRARY AND ARCHIVES CANADA—PA116536

Five crucial days passed before Montgomery allowed the Americans to cross the boundary. By then it was too late to close the gap. The Falaise Pocket would be sealed between Trun and Chambois, but only after large numbers of German troops had escaped.

Montgomery’s decision to rely on a new Canadian thrust was influenced by the growing problem of co-ordinating the Allied tactical air forces who were playing a much larger role in the battle as the Germans tried to escape the pocket. In theory, the Canadian and British squadrons of 83 Group, 2nd Tactical Air Force, had free reign within 21 Army Group’s area of operations with the U.S. tactical air forces responsible for the American sector. It proved far easier to draw lines on a map than to control pilots searching out targets of opportunity.

Incidents of friendly fire and unauthorized attacks on towns and choke points multiplied in the last half of August. With the Americans adamant that their troops receive close air support from American aircraft at all times, the danger of further friendly fire incidents was a serious issue as two Allied armies converged.

Neither Gen. Harry Crerar nor Lieutenant-General Guy Simonds was consulted on broader strategic questions. Montgomery simply ordered them to mount a second operation to capture Falaise. Simonds called a meeting of his senior commanders to examine the results of Operation Totalize and outline a plan for a second set-piece attack codenamed Tractable. According to Maj.-Gen. George Kitching, who commanded 4th Canadian Armoured Division, Simonds began with a scathing attack on the actions of the armoured battle groups. “He accused us of every known sin under the sun, including lack of drive.”

When Simonds calmed down he noted the problem before them was exactly the same as in Totalize: to obtain a breakthrough in sufficient depth to push past the enemy’s gun screen and to get the armour behind his positions so as “to deny him freedom of manoeuvrability.” The solution was to have the two Canadian armoured brigades formed up on a two-regiment front with the tanks “about 15 yards apart.” A smokescreen would prevent the German anti-tank guns from aiming their fire and if the tanks maintained a pace of about 20 kilometres an hour they would be through the enemy defences very quickly.

The armoured brigades were to cross the Laison River “by passing all opposition” to reach the high ground south of the river. The 8th and 9th Infantry Brigades, mounted in half-tracks and carriers, were to follow behind the armour and mop up resistance in the valley. Two other “lorry-borne” infantry brigades were to pass through the mopping-up troops and join the armour on their first objective. The armoured brigades would then advance to their next objective near Falaise. 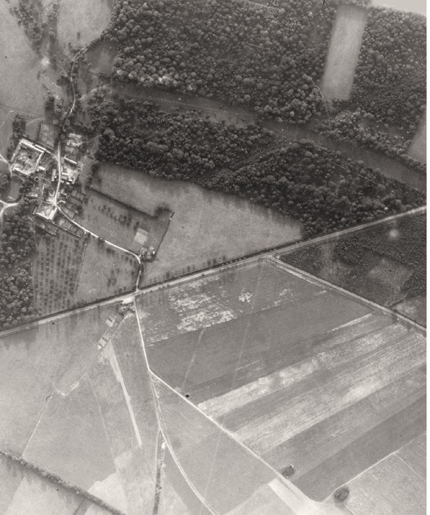 One of the most remarkable assault operations of the Second World War began at 11:40 a.m. on Aug. 14 when two densely packed columns of armoured vehicles moved forward, adding clouds of dust to the extensive smokescreen. The Laison Valley was quickly filled with an impenetrable blanket through which only the sun, a pale disc of light, could be seen. The ordered phalanxes were quickly turned into a disorganized mass of lumbering vehicles with the crews desperately striving to maintain direction by steering towards the sun.

The Canadian attack struck directly at the 85th Inf. Div. positioned on the reverse slope of the high ground north of the Laison River. The 85th was as good an infantry division as the Germans possessed at this stage of the war. Raised in February 1944, with cadres drawn from veterans of the Eastern Front, it had ample time to train while serving with 15th Army in the Somme sector. Upon arrival at Falaise, the division deployed four of its seven battalions and its anti-tank guns on the reverse slope. 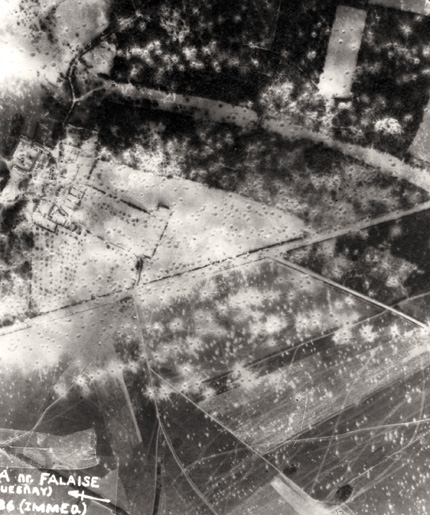 Simonds deployed the 2nd Canadian Armd. Bde. and the 9th Inf. Bde. from 3rd Div. on the right flank with 4th Armd. Div. on the left. The battered Polish division was placed in reserve. Simonds intended to exercise close command of this now all-Canadian force. He ordered the corps armoured car regiment, the Manitoba Dragoons, to feel out the situation to the east where good roads and open country seemed to invite a swift advance. But first, Monty insisted the Canadians reach Falaise.

Both divisional columns reached the banks of the Laison without heavy losses, but the seething mass of armour was utterly disorganized. The armoured regiments had been told that the river would not be an obstacle to tanks, but in fact it could not be crossed without the assistance of engineers. Crossings were slowly improvised in both sectors, but once across, the armour had to pause to sort itself out. On the 4th Div. front, the Lake Superior Regiment, supported by the reconstituted British Columbia Regt., improvised a crossing without waiting its turn. This strike force raced south, surprising a retreating enemy column, and capturing 250 prisoners. One LSR company advanced to the Falaise-St. Pierre-sur-Dives highway and smashed another group of the retreating enemy.

The Grenadier Guards had watched the first phase of the LSR attack and their regimental history notes: “…the motor battalion (LSR) following close in our tracks with most of their seventy vehicles still well in hand showed how effectively mechanized infantry can act. Running past us at speed, dismounting from their carriers, deploying at the double and moving with swift assurance into the attack they swept up the anti-tank and mortar crews in a matter of minutes. A convincing display of fighting quality often repeated and long to be remembered with grateful admiration.”

On the right flank, the Fort Garry Horse advanced in the approved fashion, two squadrons abreast. It burst through the forward defences enjoying “a great run over open country with the tank gunners taking on all likely targets by speculative shooting.” Reaching the river near Montboint, the Garrys encountered anti-tank guns, including the fearful 88s, “cutting down good sized trees.” Most of the regiment got across the river and by 5 p.m. the advance was resumed.

While the battles of the Laison raged, Bomber Command struck accurately at Quesnay Woods and other objectives around Potigny, but 77 of the 811 bombers misidentified their targets and wreaked havoc among Canadian and Polish troops in the rear areas. The errant crews, many from No. 6 Group, Royal Canadian Air Force, bombed ‘many seconds’ before the end of their timed run from the coast. Confusion over the army’s use of yellow smoke, a signal to tactical air force pilots of friendly troops, but a target marker to Bomber Command, contributed to the tragedy.

More than 150 Allied soldiers were killed and 241 wounded in four separate incidents. Signs of “mass panic” occurred in many units and ‘unauthorized self-evacuation’ from bombed areas made reorganization difficult. The short bombing had no direct effect on the battalions committed to Tractable, most of which only learned of the tragedy the next day. The vast majority of the bomber crews identified their targets and bombed accurately, striking the enemy anchor position in Quesnay Woods as well as areas east of the highway held by 89th Div.

By evening on Aug. 14 both armoured brigades were established south of the Laison River, and the leading troops had cut the Falaise-St. Pierre-sur-Dives highway, one of the main German escape routes. A further advance towards Falaise would have to wait until morning. Montgomery was disappointed by the news, but he still made no attempt to bring the Americans into the battle. We will look at the consequences of Monty’s indecision in the next article.

PrevPrevious ArticleLetters From The Bowes Brothers – Jan. 23, 1917 France
Next ArticleOn This Date: June 2013Next