Walking The Battlefields With The Milton Gregg Centre

A group of graduate students is standing on the hill overlooking a rough gully similar to what might be found in Eastern Europe or other parts of the world where Canada may be called upon to serve. However, it is not Europe, but a clearing in the vast forest enclosed at Canadian Forces Base Gagetown in southwestern New Brunswick.

On the bus trip to the site the students have seen the odd tank and light armoured vehicle (LAV III) being used in the day’s exercise in which platoon leaders will carry out a hasty attack—an improvised attack based on the unexpected sighting of an enemy.

“We like to think it would take an hour from first sighting to the planned and executed attack on an enemy position,” explains Major Tim Halfkenny, deputy commandant of the base’s Tactics School. He cranks up the volume on the radio which is barking coded orders to the tanks and LAVs.

For the students it is a chilly, quiet watch. From their position they see only bits of movement above the horizon as the armoured corps use the gullies to shield its position from the enemy encampment.  “They don’t want to be in the enemy line of eyesight any longer than it takes to attack,” says the major. 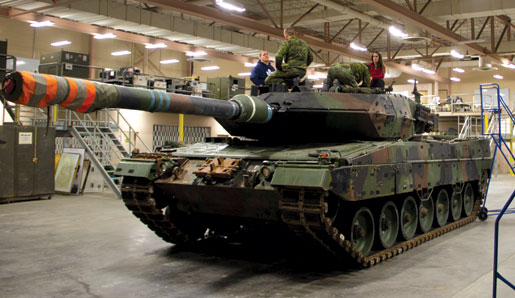 Students talk with soldiers about their equipment.
PHOTO: TOM MacGREGOR

H-hour is set for 11:35. Minutes before, the tanks and LAVs finally come into view and the attack is on. The tanks lead the way, firing, and then fall back as the LAVs come forward and the infantry disembarks.  By 11:40 the position is secure. “Not bad,” says Halfkenny.

Getting out to see an exercise and later spending the afternoon close up, even climbing on the vehicles and talking to the soldiers who operate them, is all part of the learning process at the Milton F. Gregg Centre for the Study of War and Society at the University of New Brunswick (UNB) in Fredericton. The centre is devoted to increasing understanding of the cause, course and consequence of armed conflict.

Led by historian and Legion Magazine contributor Marc Milner, the centre is physically only a corridor of offices where the staff runs undergraduate and graduate programs as well as preparing publications, conferences, speaking engagements and battlefield tours in Canada and Europe.

“I studied under Dominic (Toby) Graham who served in the Royal Artillery in the Second World War and had been briefly a prisoner of war. He was a great believer in that you had to walk the battlefields,” said Milner. “We like to give the students a chance to touch the equipment and see how things work. If you started talking abstractly about the equipment, Toby Graham would scowl at you and say ‘You don’t know how it works.’”

The Gregg Centre traces its origins to the Security and Defence Forum when the Department of National Defence established research centres at selected Canadian universities in 1981. At UNB, the centre specialized in studying low-intensity conflicts and terrorism.

David Charters, the senior fellow of the Gregg Centre, came to UNB in the 1980s as an expert in what he called “the low-intensity spectrum of conflict.” He had done his doctorate degree in England on the British Army and the Jewish insurgency in Palestine in 1945-47. He and the late Maurice Tugwell founded the Centre for Conflict Studies at the university in the early 1980s, specializing in terrorism and small conflicts since the end of the Second World War. “No one else in Canada was studying those things. Since 1945 almost everything was low intensity. There was a demand for knowledge of these things in the military, police and intelligence communities,” said Charters, who served as the centre’s first director.

Among its more notable assignments was briefing the first members of the newly formed Canadian Security Intelligence Service (CSIS). The centre also did a major study for the United States government after the failed rescue attempt of Americans held hostage in their embassy in Tehran, Iran, in 1979. “There were lessons to be learned in the course of special operations about training, intelligence, speed, mobility and surprise,” said Charters.

Through the centre, Charters and colleagues lectured and ran courses for CSIS, the Canadian Police College in Ottawa and several military schools. For several years one of Charters’ many tasks was editing the Journal For Conflict Studies, an internationally recognized scholarly journal on contemporary conflict.

“The centre took a bit of a hit in 1989 when the [Berlin] Wall came down. The Cold War was over. Nobody needed to know about terrorism. The program languished in the 1990s. It picked up a bit after 9/11 but it was never the same,” said Milner.

In November, Milner delivered the inaugural Eaton Lecture in North York, Ont. This will become an annual event for raising funds and awareness for the centre.

Although the centre was always intended to be self-funding, fundraising has become a major challenge. The last of the DND grants ran out in March 2012. “It has forced us to become more entrepreneurial,” said Milner.

When DND’s backing began to shrink, the university brought all its military programs together to form the Gregg Centre in 2006.

Gregg, a New Brunswicker, served as an officer of the Royal Canadian Regiment during the First World War. His actions during the Battle of the Canal du Nord near Cambrai, France, earned him the Victoria Cross after he led his men through a gap in enemy barbed wire and attacked a trench. When ammunition ran low, Gregg crawled back to his own unit, got supplies and returned to his men where they were able to take the trench and allow the advance to continue. 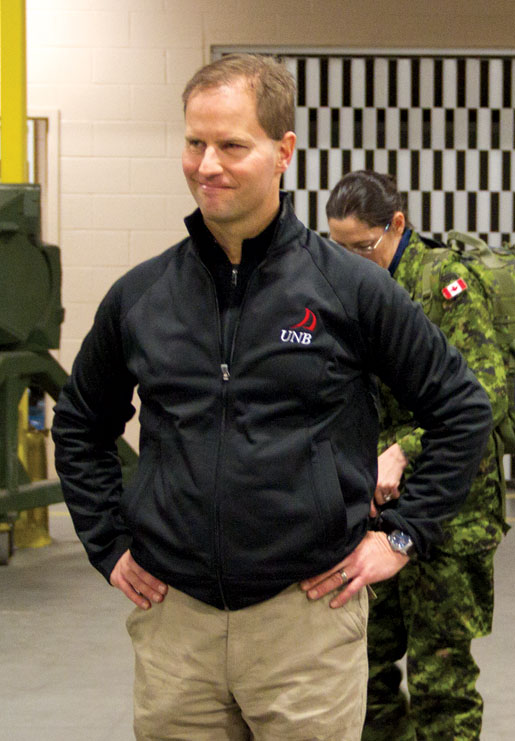 He would later serve as sergeant-at-arms at the House of Commons in Ottawa. Gregg rejoined the military during the Second World War, retiring with the rank of brigadier, and became president of the University of New Brunswick. He later was elected as a Liberal member of Parliament, served in cabinet under both Mackenzie King and Louis St-Laurent before being defeated in the 1957 election.

“New Brunswick’s military history didn’t figure prominently on the national level. We wanted to change that with a series of books which brings the history to life,” said Brent Wilson who oversees the project.

Early books in the series included a look at the military fortifications around Saint John and the siege of Fort Beausejour. “Of course, with the bicentenary of the War of 1812, we are looking at books to go along with that. One is on the 104th (New Brunswick) Regiment of Foot which made the famous winter march from New Brunswick to Kingston, Ont.,” he said.

Tanks and LAV IIIs charge out of gullies during exercises at Canadian Forces Base Gagetown.
PHOTO: TOM MacGREGOR

Having the largest military base in Eastern Canada nearby has had other benefits. Lee Windsor, the deputy director of the centre, is the co-author, along with Wilson and Charters, of the book, Kandahar Tour. It looks at Canada’s role in Afghanistan through the eyes of the soldiers of 2nd Battalion, Royal Canadian Regiment based in Gagetown as well as the support military units, diplomats, police and civilians involved in a six-month rotation in Kandahar in 2007.

“Getting the story out to the general public is the primary goal of the book,” said Windsor “But also we wanted to do it for the families of the folks who were on the tour.”

The book was a chance to capture history as it was happening, and as the authors say in their foreword, studying what happens today may shed light on why and how Canadians went to fight a war in Europe nearly a century ago.

PrevPrevious ArticleThese Are The Results For The Week Of March 18 – March 24
Next ArticleLetters From The Bowes Brothers – Aug. 27, 1916 Bramshott CampNext