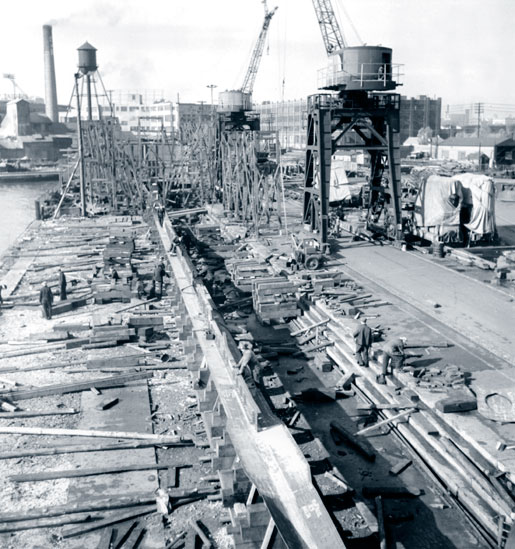 The location of this shipyard used to build Algerine-class minesweepers is not identified, but the date is 1944.
PHOTO: NATIONAL FILM BOARD, LIBRARY AND ARCHIVES CANADA—E000762568

The operational crisis of 1942 shaped the nature of the Royal Canadian Navy’s escort fleet for the balance of the war. If the RCN and the minister of defence for naval services had had their way in early 1942, all emergency war construction would be frigates. The minister, Angus L. Macdonald, considered the whole corvette class of vessels obsolete, while the professional navy remained focused on acquiring proper warships for the postwar fleet. But Canada continued to build corvettes, and fully one third of the RCN’s corvette total was added to the fleet after 1942. Why build “obsolete” ships?

The answer is twofold, and both paths led to more corvettes. The first was that Canada had significant reserve shipbuilding capacity, especially on the Great Lakes, for small warships. In the general crisis of 1942 it was inconceivable that yards and men should stand idle. That said, if something had to be built in the Great Lakes, the RCN preferred to order the new Algerine-class minesweepers. Based on a pre-war sloop design and designed as proper warships, Algerines were 45 feet longer than Bangors and much more manoeuvrable. But the RCN had little need for more minesweeping capability, and Algerines, with their flat bottoms and shallow draught, were less suitable as ocean escorts than corvettes. However, the British wanted these ships so it made sense in early 1942 to order them. Some 25 Algerines were ordered in the 1942-43 program. Ten were retained by the RCN as senior officer’s vessels in Western Local Escort Groups operating from Halifax. The rest were built—in theory—for the United States Navy which transferred them to the Royal Navy under lend-lease. The yards engaged in this work, Port Arthur (now Thunder Bay, Ont.) and Toronto, built a further 34 Algerines in the 1943-44 program for the RN. By 1945, 49 of the 97 Algerines in British service were Canadian-built.

Shifting only two Great Lakes yards to Algerine construction did not, however, absorb Ontario’s surplus capacity. In any event, switching to the more complex new minesweepers took time. So in order to keep yards and men busy in early 1942, a small program of corvette construction was authorized. Eight were ordered in February and eight in April. Then, as the operational crisis deepened, a further 22 were ordered in June, bringing the total to 38. It says a great deal about the RCN’s attitude towards corvettes at the time that most of these—23—were built for the USN: some were transferred to the RN. The remaining 15 would join the RCN, which considered corvettes still useful for inshore escort duty.

As it turned out, these corvettes were far from obsolete. The Increased Endurance (IE) corvette ordered from Canadian yards in 1942-43 reflected the accumulation of improvements derived from years of experience in anti-submarine operations. The IEs most distinctive features were an improved hull form and a naval style bridge. The greater sweep in the hull line, extended foc’sles, and the increased sheer and flare first appeared with the Revised Patrol Vessels of 1941. By 1942 the RCN had 10 RPVs in service (Kitchener, La Malbaie, Halifax, Regina and their sisters), but that interim design had retained the original low bridge built to mercantile standards. The IE incorporated a proper naval style bridge, which was also a full deck higher. The more powerful look was enhanced by raising the forward gun platform and connecting it directly to the wheelhouse level of the bridge with a wide deck. The higher bridge and gun position helped keep them clear of spray, and improved the field of fire for the four-inch gun. The increased sheer and flare of the hull, and the higher and more solid looking bridge and gun position gave the IEs quite a distinctive look. Less obvious was the switch to an upright, rather than a slightly raked, funnel. This was done to prevent U-boats from judging how the vessel lay on the water. 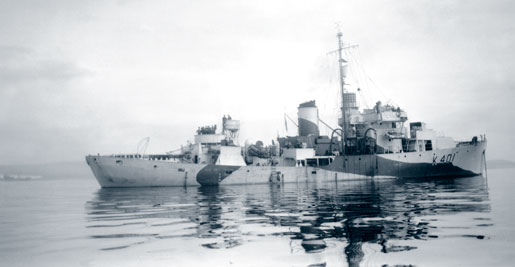 The IEs were also designed to carry new weapons. The revised bridge allowed the new forward throwing anti-submarine mortar Hedge-hog to be fitted just behind the four-inch gun. The IEs also used the four-inch Mk XIX gun as their main armament. It fired “fixed” ammunition, like a large rifle bullet and shell combination, rather than the two-piece loading system of the old four-inch BL gun on earlier corvettes (the projectile and brass casing carrying the propellant were loaded separately). This dramatically increased the rate of fire, and since the Mk XIX gun could elevate to 60 degrees it could be used as an anti-aircraft gun as well.

The less obvious—but really crucial—change to the IEs was of course their increased endurance. This was achieved in two ways. The first was the adoption of “forced draught” boilers. For naval engineers the evidence of these boilers is the absence of large hooded ventilators around the funnel. The IEs pressurized boiler rooms resulted in more efficient combustion. The second was additional fuel storage. This was added in the space freed by the use of “fire-tube” boilers. The first RCN corvettes to fit fire-tube boilers were the RPVs, but that interim design simply wasted the space saved by the switch from Scotch boilers. Unlike the Scotch boilers, which were massive drums filled with water, fire-tube boilers were little more than a compact firebox, through which pipes carried the water. Fire-tube boilers could raise steam quickly, although with little reserve for a sudden sprint. The IEs filled the empty space around their boilers with fuel storage, giving them the same operational range—7,400 nautical miles—as a frigate. The result of these changes to the hull, forward superstructure, funnel and boiler room was a fine ocean escort, which is just how the RCN used the IEs in the last year of the war.

The Increased Endurance (IE) corvette ordered from Canadian yards in 1942-43 reflected the accumulation of improvements derived from years of experience in anti-submarine operations.

By the end of June 1942, 38 orders for IEs had been approved for yards around Ontario, primarily Morton, Midland, Collingwood and Kingston. But if the RCN thought this was the end, it was mistaken. Its rather modest plans to concentrate on building frigates ran hard against the global war crisis of 1942. A review of Allied escort needs in June revealed that some 1,750 were required, but that only 565 escorts were on hand in all the Allied navies: the shortfall was nearly 1,200 vessels. Both Britain and the U.S. urged Canada to build as quickly as it could and to pour the results of its construction programs into a common Allied pool. The latter would be distributed according to need by an Anglo-American committee. The RCN was able to secure assurances that it would receive priority in the allocation of Canadian production, but in the summer of 1942 the high pressure was on from Canada’s allies not to let yards sit idle.

In the end, the addition of a large number of new corvettes to the RCN fleet in 1943-44 resulted from its inability to acquire all the frigates desired. Some hope was offered to the RCN’s ambitions in September 1942 when a government review committee reported there was more capacity in Canadian yards than previously thought. The keys to exploiting it were improved flow of equipment and materials, and the creation of specially designated yards for fitting out. The former was a problem of improving supply and yard management, the latter the establishment of new facilities. As the RCN’s official historian observed, “The hull of a minesweeper or an escort vessel could be built comparatively quickly: cramming into it the complimentary pattern of wires and pipes, the myriad diverse gadgets and machines, and the guns and other armament, was a lengthy process—especially for the frigates and Algerines which carried so much more equipment than had the earlier corvettes and Bangors.” And so a frigate outfitting yard was opened at Quebec City in late 1942, and one for Algerines at Saint John, N.B. In mid-1943, a second Algerine outfitting yard opened in Hamilton for vessels built in Toronto. 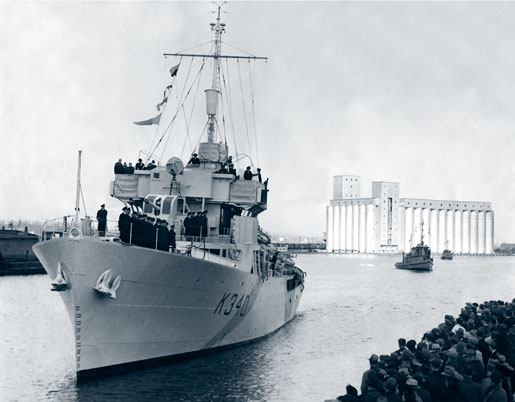 The operational crisis and the concurrent reviews of Canadian shipbuilding capacity also forced the RCN to review its fleet plan in September 1942. As a result, for the first and only time escort needs overshadowed the long-term ambitions of the professional RCN. The new fleet plan, covering the period to the end of 1944, estimated that the RCN needed to add 14 escort destroyers and 102 other escorts to meet its obligations. The priority for the latter was frigates. But despite the restructuring of the building and fitting out process, the RCN and the government could only find enough capacity to build 64 in Canada before June 1945. More frustrating still for the RCN, many of these would not enter service until well into 1944. By late 1942 it was clear that the balance of the 102 escorts required would have to be new corvettes. When the 14 IEs of 1943-44 were authorized at the end of 1942, all were to be retained by the RCN. These were augmented in 1944 by four British-built IEs (only 10 of this type were ever built in Britain), which were exchanged with the RN for Algerines.

PrevPrevious Article2012 The Year In Review: A Year Of Important Milestones
Next ArticleThese Are The Results For The Week Of March 25 – March 31Next