Breakthrough To Falaise: Mistakes On The Road To Success: Army, Part 105 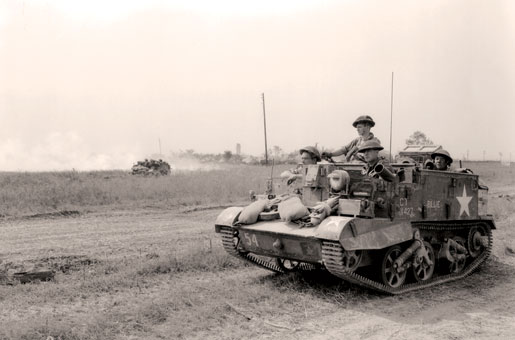 The second phase of Operation Totalize, which began on the afternoon of Aug. 8, 1944, was intended to bring 4th Canadian and 1st Polish Armoured divisions to the high ground overlooking the town of Falaise in Normandy. The divisions were to advance together on either side of the Caen-Falaise highway, employing tank-infantry battle groups supported by their own self-propelled guns and the medium artillery regiments.

Today, visitors to the Canadian military cemetery north of Cintheaux find themselves in the middle of one of the main battlefields. The village of Cauvicourt, a key German position in the Polish division’s sector, is visible to the southeast. Cintheaux, a stone-walled Normandy village, was strongly defended in 1944, and it was understood that unless this bottleneck could be quickly overcome, the advance towards Falaise would stall.

On the Canadian side of the highway, a battle group known as Halpenny Force—named after the commander of the Canadian Grenadier Guards, and composed of the Guards and the Lake Superior Regiment—tried to bypass Cintheaux on the open ground to the east. German anti-tank guns stopped the manoeuvre, but one troop with three tanks commanded by Lieutenant I.P. Phelan worked its way to the western edge of the village on foot, destroying an 88-mm gun position, then charging a hedgerow with all guns blazing. The small group then proceeded on foot to clear the village and capture “31 prisoners and 4 guns, making a total of 11 guns destroyed or captured.” Phelan was awarded the Military Cross and his comrade, Sergeant S.M. Hurwitz, received the Military Medal.

Lieutenant-Colonel Halpenny’s orders were to continue south, but with the Poles well behind on his left and uncertainty on his right, he decided to pause and reorganize, allowing the enemy a similar opportunity. The Argyll and Sutherland Highlanders of Canada-South Alberta Regiment (SAR) battle group took the lead, entered Cintheaux and captured the village of Hautmesnil a kilometre to the south. With the sun low in the western sky the lead company commander decided to wait until first light to clear the large quarry at the southern edge of Hautmesnil. The divisional commander, Major-General George Kitching, and the corps commander were understandably unhappy with this cautious approach to battle. Simonds ordered both armoured divisions “to press on by night with the aid of searchlights.”

The Polish 3rd Rifle Brigade captured the hamlet of Robertmesnil—northeast of Cintheaux—and cleared a nearby wood. However, the Polish tank regiments, which had lost a quarter of their strength, did not move until first light. Halpenny Force got underway again at 4 a.m. and the Lake Superior Regt. began what turned out to be a morning-long infantry battle for Bretteville-le-Rabet, a village situated along the eastern side of the Caen-Falaise highway south of Hautmesnil. Kitching had ordered a third battle group, which went by the name Worthington Force, to avoid entanglement with the enemy and advance to Point 195, the top of a ridge just west of the highway and north of Potigny. It was composed of the British Columbia and Algonquin regiments under Lt.-Col. Don Worthington.

The plan called for the battle group to circle east around Bretteville-le-Rabet and cross the highway to reach Point 195. The column “moved slowly through waist-high wheat” but after breaking through enemy outposts near Cauvicourt it “began to move more rapidly getting pretty well spread out and travelling generally south.” By 5:30 a.m. Worthington and his command group were lost. They had become completely disoriented. At 6:30 a.m. they moved to occupy high ground near Point 111, five kilometres east of Point 195. They reported they were on their objective and would hold “until our friends come forward to consolidate the position.” Worthington deployed his force of tanks and two infantry companies in a rectangular field with woods on two sides. By 8 a.m. the enemy, fully aroused by this unexpected breakthrough onto ground which the newly arrived 85th Division was slated to occupy, began converging attacks which in the course of the day overwhelmed the battle group, inflicting casualties estimated at 240 officers and men, including 79 taken prisoner. 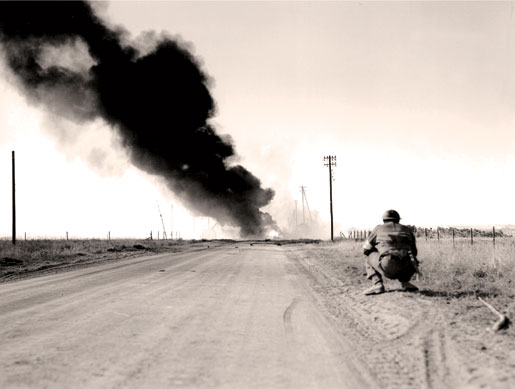 Michael Bechthold, a Wilfrid Laurier University historian working with the university’s collection of air photographs from First Canadian Army’s Air Photo Interpretation Section, discovered a set of photos documenting the experience of the battle group. His article, Lost in Normandy: The Odyssey of Worthington Force, was published in the quarterly journal Canadian Military History (available online at canadianmilitaryhistory.ca). The air photo of the rectangular woods where Worthington deployed his force was taken during the Aug. 9 battle, providing extraordinary documentation of this tragic encounter. Other photos show the route to the hill marked by tank tracks through the wheat fields.

Early on the morning of Aug. 9, Worthington and his men were startled when Typhoon aircraft circled overhead, then attacked the Canadians “with their rockets and machine guns.” When recognition panels were displayed and yellow smoke burned, “the planes rocked their wings in acknowledgement” and “returned at half-hour intervals all day long rocketing and strafing the enemy.” There was, however, no method of communicating with the men on the ground and no procedure for informing brigade, divisional or corps headquarters about the situation.

With the sun low in the western sky the lead company commander decided to wait until first light to clear the large quarry at the southern edge of Hautmesnil.

The American 9th Tactical Air Force, which had begun the Battle of Normandy employing a doctrine closely modelled on the one developed by the RAF, was far more willing to learn from experience. By late July its commander, Major-General Pete Quesada, had implemented a system known as Armoured Column Cover which allowed for direct communication between aircraft and an air officer with the tanks. This system, which was effectively employed after the July breakout, was unacceptable to the RAF which resisted all attempts to tie air resources to specific army formations or proposals to allow direct communication between tactical ground commanders and the tactical air force. Much is made of the system of “cab rank,” which allowed RAF officers attached to army units to call down air strikes on specific targets, but this was a poor substitute for the intimate co-operation developed between the U.S. army and its tactical air groups. If the British Columbia Regt.-Algonquin Regt. battle group had been an American formation there would have been no difficulty in identifying its location or relaying information to the divisional commander.

Bechthold has tried to determine why Worthington and his men ended up so far from their objective and why it proved so difficult to locate them. Communication failures included language problems with Polish units who were within sight of the field where the battle took place but failed to intervene or inform corps as well as RAF resistance to direct contact between tactical air squadrons and ground forces. 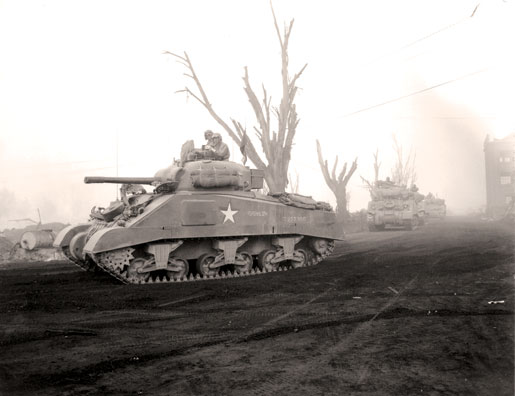 Despite uncertainty about the fate of Worthington Force or the location of the Polish units, Simonds was determined to continue through the night of the 9th. He ordered the armoured divisions to renew their advance. The Lincoln and Welland Regt., supported by South Alberta tanks, had cleared the village of Langannerie in the late afternoon and their sister battalion, the Argyll and Sutherland Highlanders, was ordered to pass through to Point 195 after dark. The Argylls accomplished what the armour had failed to do by a carefully planned night march, single file in complete silence, which brought them to the crest of their objective before first light, where they dug in—within shouting distance of the enemy. The Lincs had followed up with a similar night march to Hill 180 on the Argyll’s right flank. With the South Alberta Regiment’s Shermans posted behind, the original objective was at last in the division’s grasp. Daylight brought sharp counterattacks, but no ground was lost or won. An attempt to pass the Grenadier Guards through this position met with a serious check when a German counterattack destroyed eight Shermans. By nightfall on the 10th, the advance of 4th Armd. Div. had come to an end. The division had lost 40 per cent of its armoured vehicles.

East of the Caen-Falaise road, 1st Polish Armd. Div. continued to face stiff opposition, particularly from strong German forces posted in Quesnay Woods. Simonds ordered 3rd Canadian Div. to clear the woods in preparation for a Polish armoured advance to the Laison River. Third Div. had already lost its commander, General Rod Keller, after he was wounded by Allied bombers on the 8th. The Queen’s Own Rifles drew the main assault task and bravely advanced into what turned out to be a carefully prepared trap. The division suffered almost 200 casualties in this abortive attack. Operation Totalize was over.

By any reasonable standard, Totalize was a very successful operation. The corps had broken through a strong defensive position. This breakthrough did not become a breakout because the 89th Div. fought with considerable skill as did the battle groups of the 12th SS. The arrival of the lead elements of the 85th Div. on Aug. 10 added significantly to the enemy’s strength and convinced commanders on both sides that the new defensive position north of the Laison River could be held against improvised attacks.

Visitors to Normandy can readily visualize the problems encountered by the two armoured divisions in their first engagement with the enemy. An overview of the startline and Verrières Ridge can be seen from a battlefield viewing area in St. Martin-de-Fontenay, located on the west side of the highway. This site, an inspired creation of the Canadian Battlefields Foundation and the Toronto Scottish Regt., has been transformed into a regional park and Canadian memorial.

The Canadian and Polish military cemeteries are well marked on the N158, the Caen-Falaise highway, and each overpass allows the motorist an opportunity to see the ground from a good vantage point. The memorial to the men of Worthington Force is located on Highway D131, direction Maizières, and is visible in this wide-open rolling country from a considerable distance. The village of Soignolles, where a Polish battle group fought its own battle with German tanks, is due north. The D131 is also close enough to the startline for the second major Canadian tank battle of the war, Operation Tractable, which we will begin to examine in the May/June issue.