August 1, 1944: Family Allowance Bill is passed in the House of Commons.

August 3, 1989: Barely 11 days old, Wesley Behm makes history as he receives a new heart at the Ottawa Civic Hospital. The surgical team is led by Dr. Wilbert Keon of the Ottawa Heart Institute.

August 4-5, 1914: Britain declares war on Germany, and so Canada is automatically at war.

August 6, 1945: The first Atomic bomb is dropped on the Japanese industrial city of Hiroshima. Approximately 140,000 people die—many of radiation—in the days that follow.

August 7, 1950: As the crisis in Korea worsens, the Canada government authorizes the recruitment of the Canadian Army Special Force.

August 8, 1918: In conjunction with other Allied forces, the Canadian Corps launches a major attack to the east of Amiens, France, beginning a period of operations remembered as the Last 100 Days.

August 9, 1974: A Canadian Buffalo aircraft, attached to the United Nations Emergency Force Middle East, is shot down by Syrian surface-to-air missiles. All nine Canadians on board are killed.

August 12, 1985: More than 500 people are feared dead after a Japan Airlines jumbo jet crashes on a mountainside 112 kilometres from Tokyo. 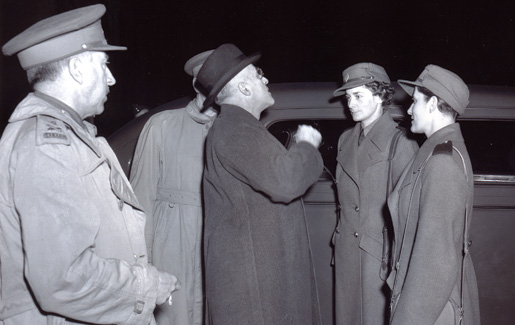 August 15, 1944: Off the coast of France, the Royal Canadian Navy destroyer Iroquois, the Royal Navy cruiser Mauritius and destroyer Ursa attack a German convoy in the Bay of Biscay. The German minesweeper M-385 is hit and run aground.

August 22, 2001: Two hundred Canadian Forces members work with other NATO personnel to collect and destroy weapons used by militia during the war in the former Yugoslavia.

August 23, 1979: In Iran, Kurds oust government troops near the Iraqi border. The revolt started when Kurdish tribesmen attacked and overpowered Iranian troops in the town of Paveh.

August 24, 2007: The Ontario Ministry of Transportation announces it will name a section of Highway 401 the Highway of Heroes in memory of Canadian soldiers killed in Afghanistan. The stretch of highway runs from Trenton to Toronto.

August 27, 1944: In Italy, 1st Canadian Infantry Division smashes through German positions along the Arzilla River known as the Red Line.

August 28, 1942: While on convoy duty, His Majesty’s Canadian Ship Oakville sinks U-94 in the Caribbean.

August 29, 2005: Hurricane Katrina is devastating New Orleans. The storm has by this day knocked out power, flooded the low-lying city and torn part of the roof off the football stadium where many have sought shelter.

August 30, 2001: At the International War Crimes Tribunal in The Hague, former Yugoslav president Slobodan Milosevic is told he is to be charged with genocide. He is already facing charges relating to the Kosovo conflict of 1999.

August 31, 1997: Diana, Princess of Wales, dies in a car crash in Paris. The world is in shock as details of the story unfold. Also killed are her friend Dodi Al Fayed, son of Harrods owner Mohammed Al Fayed, and the car’s driver.

For ‘ON THIS DATE’ September Events, come back to legionmagazine.com on September 1st, 2011