Canadian youth have once again risen to the challenge of remembrance, as this year’s winners of The Royal Canadian Legion’s annual literary and poster contests prove so ably with their images and ideas about the past and present of conflict and peace.

From Jan Sobotka of West Vancouver, B.C., senior colour poster winner, there came an amazing poster of Canadians under fire in an a kind of underworld, a hellish grey and fiery place where the explosions—and men—become poppies, ascending to rest peacefully in a green field beneath a Canadian flag.

From Jack Kinnie, a high school student from Moncton, N.B., there came an intermediate black and white poster winning entry that artfully and realistically juxtaposed the destruction of war with the celebration of its victory.

“I wasn’t there to watch them live with broken hearts. I wasn’t there to pick up the broken bodies,” writes Shea Goreham of Bridgetown, N.S., in I Wasn’t There, her distinctively subtle piece which won the senior poem contest. “I wasn’t there to see every person go through hell. / I wasn’t in the war but that doesn’t mean I don’t care. / I remember their sacrifice, what they paid and thank God I wasn’t there.”

For Michael Sullivan, a student at St. Bonaventure’s College in St. John’s, Nfld., one of his strongest ties to history is his grandfather Rolland “Rolly” Paquette, about whom Sullivan wrote in his senior first place prize winning essay, Two Minutes.

Sullivan’s essay is a clear exposition of what remembrance means to Sullivan, and what it perhaps should mean to all Canadians.

“Each November 11 the country stands still,” wrote Sullivan. “As I stand at the war memorial in St. John’s, there is a deafening silence for two minutes as society pauses to mentally recoil at the horrors of wars present and past and to remember the grace of the heroic men and women who embark on distant journeys to uphold the rule of law and keep peace in the world. It cannot be disputed that the soldier occupies the noblest public office, for his and her destiny is irrevocably woven into the fabric of democracy and humanity. By reflecting on stories such as those of…my grandfather Rolland Paquette, future generations can be inspired by the vital message they send regarding the cost of freedom and the value of service.

“While I never had the chance to meet [my grandfather], for he died while young, I have been told of the valour he showed in the Korean War. A member of the legendary “Van Doos” (Royal 22nd Regiment), he served the cause of freedom in South Korea as an ambulance driver. He felt pulled towards service and was a peacekeeper by nature. The role of ambulance driver suited him well. On Jan. 8, 1952, he was driving his medic and a wounded soldier to the temporary hospital. Contrary to the protocols of humanity enshrined in the Geneva Conventions, the ambulance was bombed by the communist forces, killing the medic and wounded soldier. Rolly himself managed to survive, but was badly wounded and was forced to survive in a trench by the side of the road. When he was finally rescued by Allied forces, his injuries resulted in the placement of a permanent steel plate in his left shoulder and a piece of visible shrapnel lodged in one of his eyes for the rest of his life. This story of valour and service within my own family in contribution to freedom in the world is yet another factor that motivates me towards service and the realization that so much is taken for granted. I am proud to this day that I hold my grandfather’s first name, Rolland, as my middle name and that I have a close relation to a man who exemplified service and sacrifice.”

For Jonathan Travis Brown, a Grade 11 student in Guelph, Ont., winning the national award in the senior black and white contest was, well, mostly a surprise. “Entering was kind of suggested by my art teacher,” said Brown, who had never entered the contest before. “We had a small class and she suggested that we all submit in different categories. I thought more about it and I thought, ‘that is something I’d like to do,’ so I did.

“At the beginning, personally I felt like I wasn’t ‘in it to win it,’ as you say. It was kind of just out there. And even while advancing through the levels, I still wasn’t sure I could ever win. My teacher was sure though,” he laughs, “she thought I had a real chance. As for me, I was constantly surprised and astonished at how well my poster did.”

Brown’s poster is a genuine and moving depiction of the idea that soldiers die to defend freedom and create peace. On one side of his artwork there are soldiers at war and across the road, there is peace. “Their Sacrifice. Our Freedom,” the poster reads.

“For me, because I’m not a person who’s constantly studying military history, what I take most out of our history is all those soldiers laying down their lives so that we could have the freedom that we now have. They changed our lives by doing that.”

Brown also says he is very much looking forward to coming to Ottawa this November, where he and the three other senior-level winners will place a wreath on behalf of Canada’s youth at the national Remembrance Day ceremony. In the end, for Brown, creating his poster turned out to be nothing less than an introduction to veterans and remembrance.

“As I went through the process of creating this poster—obviously there’s some research involved with doing this—one thing I noticed is that there’s a very, very high level of respect for veterans. I think for most Canadians, remembrance is not as important anymore. And it should be. And so there’s definitely a lot to learn there. It’s really inspiring to see how they laid their lives down for us and I think that deserves a lot of respect and honour.”

A better summation of the goals of the Legion’s literary and poster contests would be hard to imagine. The contest, which has been held for Canadian schoolchildren for more than 50 years now, is intended to foster remembrance among youth of all ages.

This is a goal shared, no doubt, by senior essay winner Sullivan, who wrote: “This is what I believe to be the ultimate message youth should receive on Remembrance Day: the freedom we hold dear is the result of sacrifice and service by brave men and women all over the world. Without these people, fundamental human rights would not exist in their current form.” 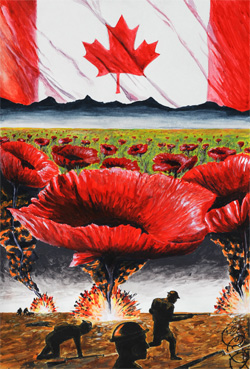 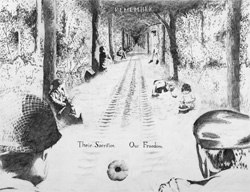 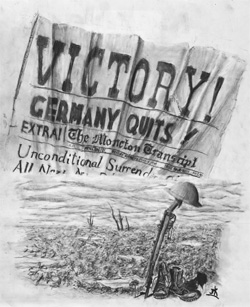 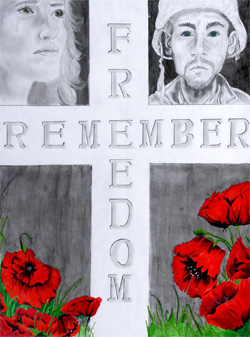 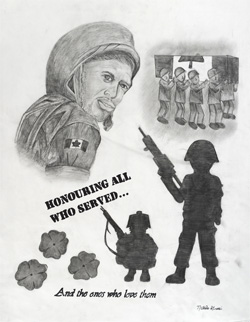 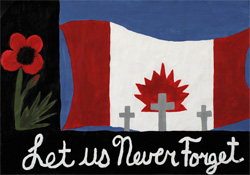 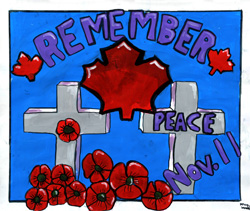 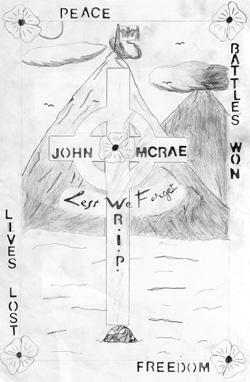