Rear-Admiral Paul Maddison could not help noticing it as an echo from the darkest days of the Second World War. There, after all, was Halifax’s Bedford Basin, filled with warships ready for whatever task may fall to them.

Behind him were 28 ships from Canada and its allies in the North Atlantic Treaty Organization, all lined up as if ready to go off to war. “Some of these allies were our bitterest enemies at a different time,” said Maddison, referring to the presence of two German navy ships, the FGS Karlsruhe and the FGS Spessart.

The vessels had gathered for the June 29th International Fleet Review, the centrepiece of year-long Canadian navy centennial celebrations. Conducting the review during their summer visit to Canada would be Her Majesty the Queen and His Royal Highness the Duke of Edinburgh.

Although the royal review would be completed in an afternoon, the navy had turned the event into a weeklong celebration, June 25 to July 2. Dozens of ships were tied up around the harbour and open—on certain days—for the crowds to review.

Her Majesty’s Canadian Ship Athabaskan (3rd) was the command ship for the flotilla. Also available for review was HMCS Toronto, one of 12 patrol frigates commissioned in the 1990s. In addition, the review featured HMCS Corner Brook, one of four Victoria-class submarines, and the CCG Edward Cornwallis, the Canadian Coast Guard’s light icebreaker.

Among the most spectacular ships at the event were the aircraft carrier Her Majesty’s Ship Ark Royal; the USS Wasp, an amphibious assault ship; and the USS Gettysburg, a guided-missile cruiser. Other ships came from Belgium, Brazil, Denmark, France and the Netherlands. 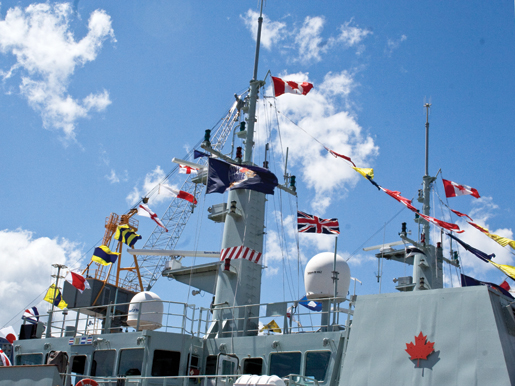 During their shore leave, hundreds of sailors visited HMC Dockyard’s Centennial Village where they found free computer access, making it possible for them to check in with loved ones by e-mail. The village also included the Alexander Keith’s Brewery hospitality tent, complete with live music each evening and most afternoons.

The Royal Canadian Legion, which operated a public information booth during the review, has been a major supporter of the navy’s anniversary celebration. It donated $20,000 towards the fleet review, $30,000 for a painting exhibit and $20,000 for a poster contest. 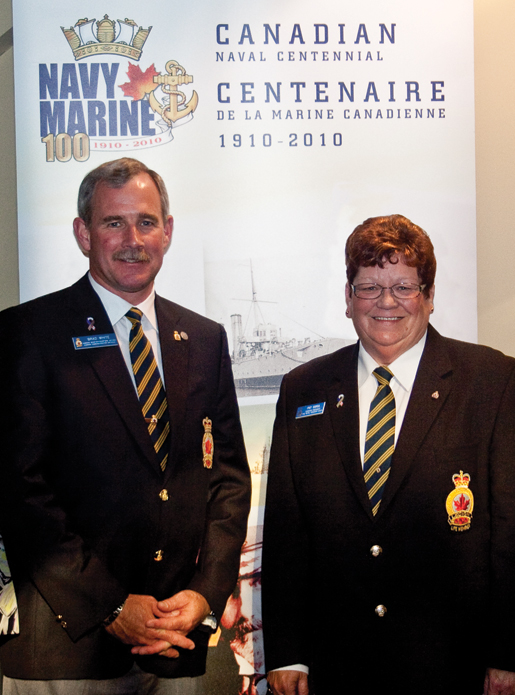 The Royal Nova Scotia International Tattoo, a weeklong major tourist attraction every year in Halifax, had named its July 1-8 show in honour of the centennial. Legion Dominion President Pat Varga and Dominion Secretary Brad White were guests at a dress rehearsal for the three-hour show, and performances included more than a dozen acts from Canada as well as performers from the United States, Great Britain, France, Belgium, the Netherlands, Germany and Estonia.

While Halifax was abuzz with the ships at port, the top attraction was Queen Elizabeth II. Hundreds of spectators waited in an absolute downpour June 28 for her arrival at Garrison Grounds, just down from the historic Halifax Citadel. Holding a clear umbrella, the Queen arrived, accompanied by Governor General Michaëlle Jean. Moments later she was officially welcomed to Canada by Prime Minister Stephen Harper and Nova Scotia Premier Darrell Dexter. “My mother always told me Canada is like a second home,” she said during her brief remarks. “Thank you for the welcome. It is good to be home.”

The rain let up during the night, and although the next morning’s fog had lifted, the day of the review remained misty and overcast, enough that the Snowbirds, Canada’s air demonstration team, had to cancel a planned flypast. 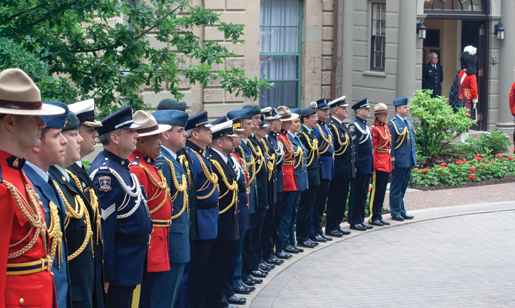 The Royal Navy tradition of reviewing fleet assemblies began when George III reviewed the British fleet in 1773 following the Seven Years’ War. Much earlier than that, however, was the review conducted by Henry V at Southampton in 1415.

The first fleet review in Canadian waters by British royalty occurred in July 1958 during British Columbia’s centennial year when Princess Margaret reviewed 32 ships at the Royal Roads anchorage in Victoria. In 1959, the Queen reviewed Canadian and American warships near Montreal during the opening of the St. Lawrence Seaway. 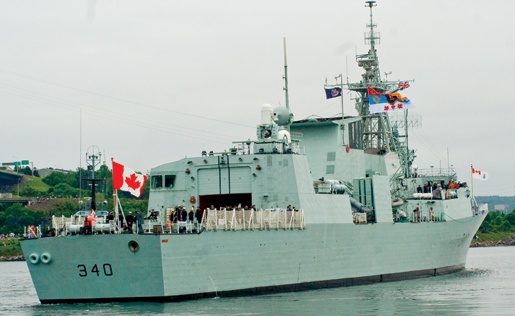 Following a luncheon for 300 guests in the Wardroom at Juno Tower, Canadian Forces Base Halifax, the Queen arrived on the jetty at the Bedford Institute of Oceanography on the Dartmouth side of Halifax Harbour. Prince Philip, a Royal Navy veteran, was dressed in his Canadian navy uniform with a sword. Together they boarded HMCS St. John’s, and as the frigate sailed under the Angus L. Macdonald Bridge toward the assembled ships, HMCS Charlottetown gave an initial 21-gun salute. 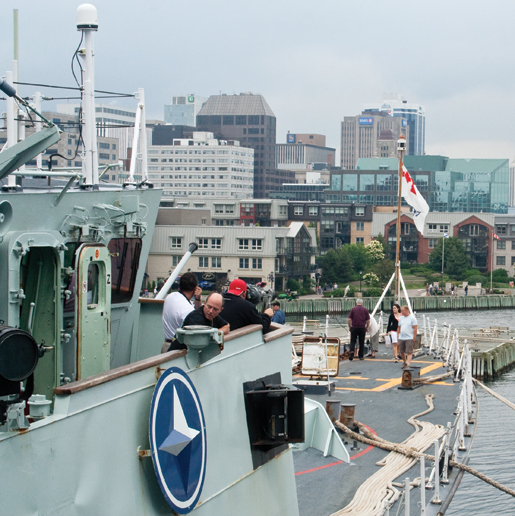 With flags and pennants waving, the crews of each ship—dressed in white uniforms—lined the upper decks while their captain and other officers stood on the bridge. As St. John’s passed each ship, each company “manned the side” and gave three cheers for the Queen and waved their caps while the officers saluted. Overhead a flypast of Canadian helicopters, including Search and Rescue Cormorants and Canadian Forces Sea Kings, recognized the role of naval aviation. Unfortunately, due to the overcast conditions, a multinational flypast was cancelled. 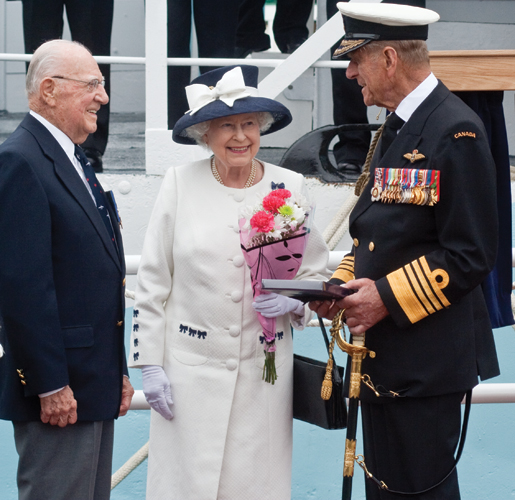 One of the two from Athabaskan (2nd) was Nova Scotia/Nunavut Command President Les Nash who had served in the engine room. “Once they found out where I had served, they gave me a complete tour of the engines, even the area which had been off bounds for security reason,” said Nash.

At the end of the review, Athabaskan (3rd) gave a final 21-gun salute as St. John’s docked on the Halifax side of the harbour.

While there, the Queen was officially thanked by Maddison who presented her with an authentic Royal Navy/Royal Canadian Navy Wilkinson-pattern sword, part of a limited edition commissioned by the Canadian Naval Centennial office. The blade was forged of high quality steel with naval badges and battle honours etched in acid using tradition techniques. The sword guard was cast of brass, hand-chiselled and polished, and electroplated with 24-carat gold. It will be kept by the navy with the Queen’s Colour and worn by the colour guard officer at official parades. 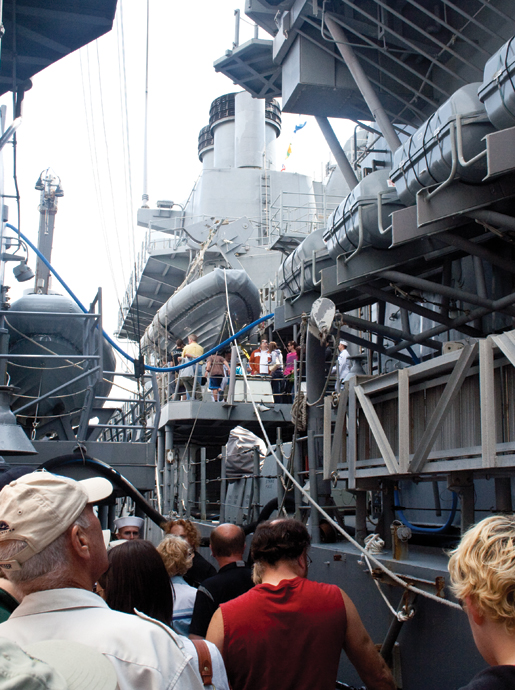 Nearby was the last surviving wartime corvette, now serving as Canada’s National Naval Memorial. Constructed in Saint John, N.B., HMCS Sackville was one of the more than 120 corvettes built in Canada during the Second World War. Small compared to today’s modern warships, she served by escorting merchant ships across the U-boat infested waters of the North Atlantic.

She is maintained and operated by the Canadian Naval Memorial Trust, a non-profit society, which has preserved the ship in its 1944 configuration to serve as a museum. John Jay, chairman of the trust, welcomed the royal couple, before the Queen unveiled a plaque marking the importance of Sackville’s service to Canadians and the war. 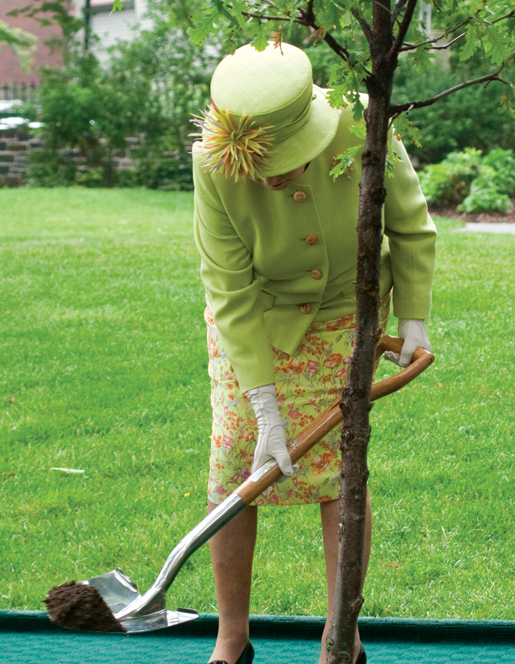 Among the invited guests on the dock were Lou Howard, 86, of Ottawa and Werner Hirschmann, 87, of Toronto who share a remarkable bit of history. Howard had been a navigation officer with HMCS Sarnia on April 16, 1945, when it went to meet HMCS Esquimalt, a Bangor-class minesweeper. “We were to rendezvous at a particular buoy, but it was not there,” remembered Howard.

After waiting a while, the ship finally received word that Esquimalt had not reported all morning and that Sarnia should look for it. “We picked up 27 survivors and 13 corpses. Hypothermia took 44 young men,” said Howard bluntly.

Esquimalt had been hit by a torpedo from U-190. The chief engineer on the German submarine was Hirschmann. Esquimalt was the last Canadian battleship sunk during the war. Less than a month later, the war was over for Germany and Hirschmann and the rest of the crew were ordered to the nearest Allied port to surrender. “We went ashore at Newfoundland and I was a prisoner of war for one year. They sent me to Gravenhurst (200 kilometres north of Toronto). It was the best time of my life,” he said fondly. “I came back to Canada in 1952 and became a Canadian citizen in 1957,” he said. 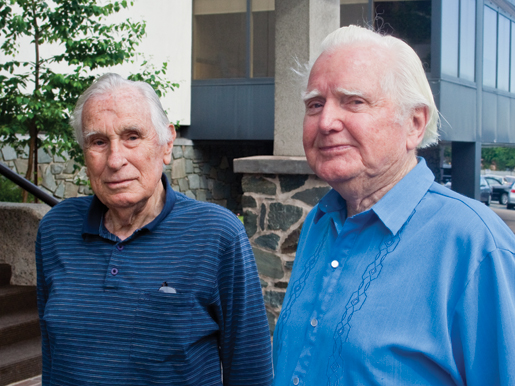 Hirschmann married and had a career, but when he heard about a reunion for the crew of Sarnia and the survivors of Esquimalt in 1995, he asked if he could go and talk to the men. The reunions continued and Hirschmann continued to be invited. “We used to have a group of 34. Now we are down to two,” explained Howard.

The last naval event on the royal tour was for the Queen to plant a tree at Government House, the official residence of the lieutenant-governor, where she had stayed while in Nova Scotia. The sapling was an English oak tree, commonly referred to as “the wood of the navy” because its strength made it a prized timber for building ships. The Queen’s father, George VI, had planted one in the Public Gardens in 1939, just a few months before the war was declared and large numbers of warships became a common sight in the Bedford Basin.