Home » Our Veterans » Remembrance » RCEL: For Service And Honour

RCEL: For Service And Honour

Helping commonwealth veterans has been the heart of the Royal Common­wealth Ex-Services League (RCEL) for almost 90 years; but helping when the need becomes overwhelming can lead to despair in the most resolute of volunteers. Yet the message from delegates at the 30th Triennial Conference of the RCEL in Accra, Ghana, was loud and clear: We carry on regardless, because it is unthinkable not to do so. 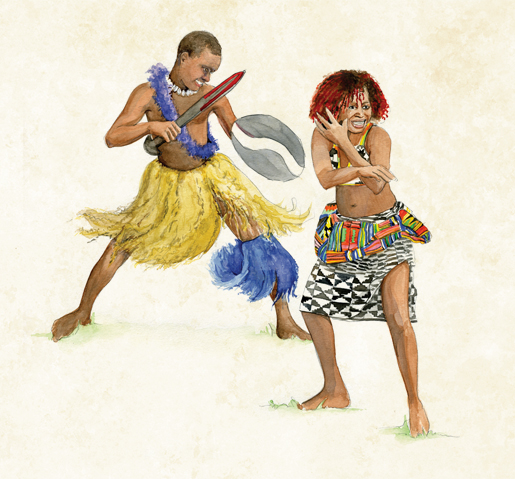 The combination of natural disaster and poverty is unrelenting and so the delegates of the RCEL came together July 19-23 to find solutions. On a humid evening on the Gold Coast of Africa, they met to discuss the challenges faced by the 60,000 remaining veterans who served the crown during the first and second world wars. They were joined in Accra, Ghana, by His Royal Highness the Duke of Edinburgh and all 78 delegates were united by a single principle: the desire to stand by the thousands of veterans who are now in need and who answered the call when the Common­wealth faced its grimmest hour. They represented 43 of the 48 countries in the charity, and all but nine of the 56 member organizations. 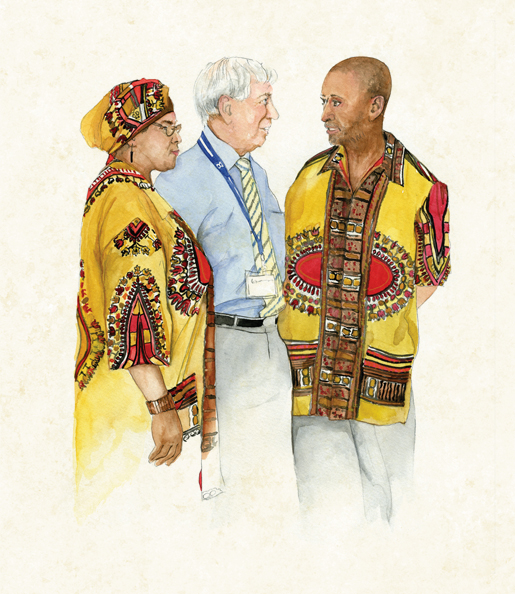 The July meeting began by honouring those who lost their lives in the Second World War. Delegates travelled by coach for a remembrance ceremony at the Christiansborg War Memorial Cemetery, Accra. There, 419 soldiers, including eight Canadians, lay buried side by side. Twelve waves of wreath bearers followed the Duke of Edinburgh in a ceremony arranged by the Veterans Association of Ghana. Canada was in the first wave, represented by Dominion President Wilf Edmond. Afterwards the prince mingled with the Ghana veterans all of whom fought in Burma and hold the Burma Star.

That afternoon the delegates were divided into four groups for regional discussions, an innovation at this year’s conference, intended to provide an opportunity for like-minded groups to share ideas for the future. Dominion Secretary Duane Daly chaired the regional discussion which included Canada and the nations of the Caribbean. He described the participants as “a small, but very cohesive group, sharing many values and many common concerns.” Discussions included effective ways to encourage modern-day veterans to do more and ideas to persuade governments to set a minimum standard of care for all commonwealth veterans. 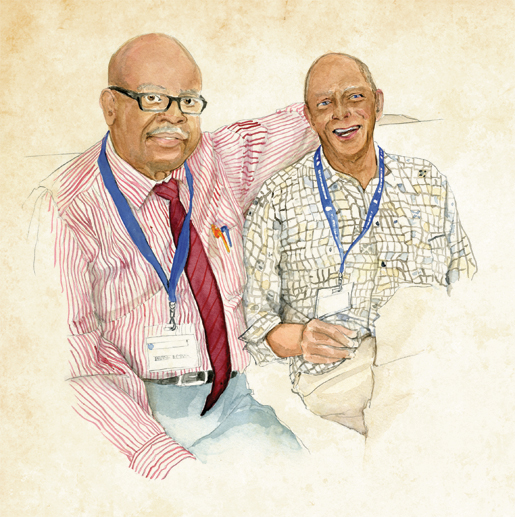 From left: Delegates Kingsley Nelson of Guyana and Reginald Cherebin of St. Lucia discuss the work of the RCEL.
ILLUSTRATION: JENNIFER MORSE

Sam Nathan, the delegate from St. Kitts and Nevis, voiced concerns for the future of the RCEL, “Quite rightly over the years we have focused on veterans, but this is also an ideal opportunity to move into comradeship.” Nathan stressed the importance of maintaining the military relationships that had been forged in the league over the last 87 years.

Major-General Bill Crews of Australia addressed the matter as chair of his regional group. “Eventually all of our pre-independence veterans and widows will sadly have moved on. That leaves the league approaching that point with two clear options. One is that the last person out turns off the lights and closes the door. The job is done. The second is that the league might look for an opportunity to reinvent itself and take on new roles, new functions.”

The RCEL is administered by a small secretariat located in London, England, and Secretary General Colonel Paul Davis can see roles for delegates for many years to come. “The agency work that we do has trebled in three years, to 331⁄3 per cent of our total welfare, and will go on forever. To do that work we need people in-country.” 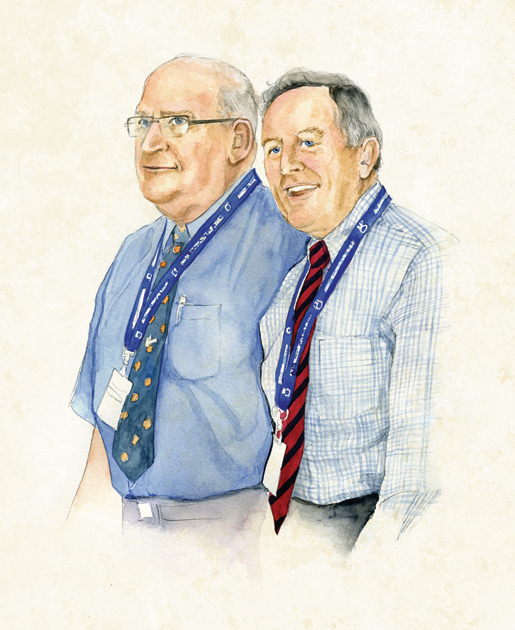 The next day, Monday, July 21, the prince was joined by the Vice-President of Ghana, His Excellency Alhaji Aliu Mahama, in officially opening the conference. The first order of business was to re-elect Prince Philip once more as Grand President. The prince began by thanking his host. “It was not the original intention, as you know, for us to be here, and so we are particularly indebted to the government and the Veterans Association of Ghana for offering their hospitality on quite short notice.” Three years earlier, in Ottawa, Fiji was selected as the destination for the conference, but a military coup on Dec. 5, 2006, caused Fiji to be suspended from the Commonwealth and a new venue had to be found. The change in circumstances meant that Accra was the first conference funded solely by the RCEL, and in an effort to save money the conference was reduced from six to four days.

The prince also focused on recent global catastrophes. “It seems to me bad enough that veterans find themselves incapacitated in one way or another, but trying to cope with natural disasters in Burma, and with ever-rising food prices, it is putting a heavy strain on all the members and the society we seek to serve. So I am glad to see that the league dispersed more welfare funds last year than at any time since it was founded in 1921.”

In 2007, over £1,535,171 ($3.15 million Cdn) was expended on welfare throughout the Commonwealth, with the largest single grant, £237,965, given to Zimbabwe. Dave Macneill, Zimbabwe, explained the astonishing challenges faced in his country. “Three weeks ago a quart of beer was three billion Zimbabwe dollars and in three weeks it has gone to three hundred billion dollars.” He offered another example. “We, as the Legion, applied for a grant to pay wages, main­-t­enance of equipment, etc. We were given a thousand pounds in April of this year. We received the grand sum of just under 400 billion Zimbabwe dollars. In April that was a lot of money, we were over the moon with it, but as you can see, today that is the price of a beer and a bit.” 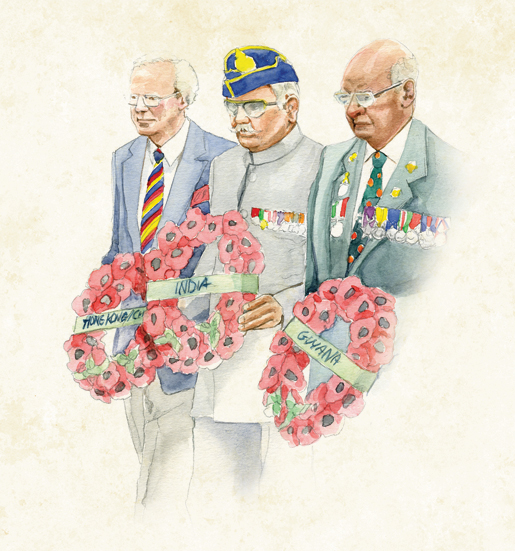 As Dominion President Wilf Edmond summarized, “A veteran could sit down for a beer and before he finished drinking, he could no longer afford it.”

Asia, too, has faced horrendous tragedies this past year. Although Myanmar is not part of the Common­wealth there are thousands of soldiers in that country who fought for Britain, and so in 2001, the league joined forces with the newly created ex-services organization, the Burma Forces Welfare Association. Sherry Scott, representing Burma, spoke of the challenges of helping commonwealth veterans after cyclone Nargis and flooding devastated Myanmar last May. It is always the young and the old who are most vulnerable in natural disasters, and Scott was only able to locate and help 11 veterans in the days after the disaster. “You just wanted to save them,” she said. “Your instinct is to try.… The very first day one of our veterans daughters recognized us and said my father has gone with the big wave. My father went, my daughter went, all my grandchildren went, and now there is only me. My only income was the money that came to my father.”

Col. Michael Winarick, the league’s Honorary Treasurer, reminded the conference that grants from Canada and Australia went directly to beneficiaries in the Caribbean and Australia, monies above and beyond the £1.5 million distributed by RCEL headquarters. He said, “We all remain indebted to the RCL for its continued significant financial commitment and support. They provided the equivalent of £173,000 last year alone, the highest figure on record.” The RCL’s tremendous support has continued into 2008 and was demonstrated on the floor of the dominion convention earlier this year. Donations and pledges for the support of veterans and their depend­ants in the Caribbean were tallied at a record sum of $312,940.

“Love of country, loyalty, honour, sacrifice, humanity, duty. They obeyed their call of duty. As they did, so must we. We must obey our call of duty to them.”
– Brian Watkins

The constitution of the charity requires that the member organizations meet every three years to discuss resolutions. This year there were three proposed changes to the constitution. The definition of a veteran and their dependants was tightened for clarity. There was agreement on a fixed subscription fee of £10 to member organizations, and in a decision to both conserve funds and curb expenditures it was further resolved that future conferences would meet every four years rather than the current three. Finally delegates voted to hold the 2012 conference in Malta.

The closing address was delivered by Brian Watkins, Chairman of the RCEL steering committee. He described why he believed thousands of veterans throughout the Commonwealth came to England’s aid in the wars. “They answered that call because they shared a common belief in the values and ideals which still motivate men. Values which we in the league, wherever we may come from, hold dear…. Love of country, loyalty, honour, sacrifice, humanity, duty. They obeyed their call of duty. As they did, so must we. We must obey our call of duty to them.” Watkins ended by quoting the epitaph on the Kohima memorial in Burma. “‘When you go home, tell them of us and say for your tomorrow, we gave our today.’”

And so they carry on, because it is unthinkable not to do so.