Troops Say Thanks For Care Packages 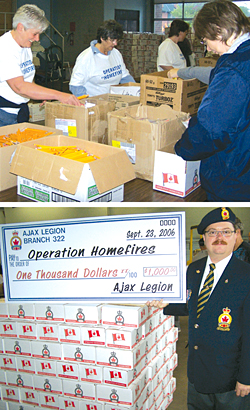 Canadian Forces soldiers in the Middle East are far from home and living in tough conditions in an uncertain environment. At any time of year their mission is a tough one, but at Christmas–when family and friends are celebrating the holidays back in Canada–it’s even tougher.

With this in mind, Ontario Command’s District F set itself the task of making this past Christmas a little nicer for as many soldiers as possible. Dubbed Operation Home Fires, the project brought together in a common cause the district’s 55 branches, stretching east of Toronto, from Pickering to Deseronto and north to Haliburton and Bancroft. Together they created 3,000 comfort packages for Canadians serving in overseas operations, primarily Afghanistan, in time for delivery during the Christmas period.

The packages contained anything and everything the soldiers could want from deodorant to food items to letters of support.

The idea for the project came up at district convention in 2006 and it received unanimous approval. The effort was co-ordinated between a special committee based out of Whitby Branch and the Canadian Forces Personnel Support Agency (CFPSA) to ensure that all military protocols and security issues were followed.

“We were the only organization that CFSPA approved for shipment by the Forces,” said Mary Ann Goheen, District F public relations officer.

As the project gathered steam, however, it moved beyond the Legion. Private individuals, schools and businesses of all sizes pitched in to help where they could, whether it was donating goods and services or writing letters. Hundreds of schoolchildren signed paper banners and made cards or pictures to decorate mess halls and personal areas.

Now, quite a few months after Christmas, it is clear that Operation Home Fires was a strong success. And that’s not just an opinion because, as Goheen said, “you only have to read some of the letters from the troops to feel their appreciation.”

And these letters, or at least a small sample of them, are worth reading.

“Hopefully you are having a white Christmas back in Ontario, because I am not counting on one out here,” wrote Marshall Gerbrandt, a sailor on Her Majesty’s Canadian Ship Ottawa in the Arabian Gulf. “Aside from the lack of snow, all is great at sea. Although we may not be slicing the turkey at home, or decorating our houses, we have made the ship our home this year; by decorating various spaces, and serving up a traditional Christmas dinner. Thank you, and the many members of your Legion who have taken the time to send us a care package. Receiving gifts from you and various other organizations back home has raised the morale of the crew. Although being away from home at any point in time is difficult, Christmas time is especially hard. Everything that you have sent, from the playing cards to the Fisherman’s Friends has lifted the spirits of each and every one of us.”

“I would like to thank everyone for making our Christmas here in Kandahar a very merry one,” wrote Corporal J.E. Walter. “It’s strange how things work, but I never thought of myself as a Legion-type person, probably because I never thought I would feel the way I do today, but after being through the last five months and experiencing what I have, I look at things a little differently now. I am committed to making myself aware of my Legion and showing a presence at the branch in Owen Sound when I return.”

“Thanks for the great gift that was dropped on my desk this morning. It is New Year’s Eve here and it was a most welcome package,” wrote Major A.J.L. Troisfontaines from Kandahar. “In my 22 years in the military, this is without question the best little care package that I have ever received–you must have read my mind because I need and want every one of the items included (especially the deodorant). Thanks for taking the time to boost our spirits out here during the holiday season.”

As for the organizers and Legionnaires of District F, they say they’ve only just begun. “Operation Home Fires is not a one-time shot in the dark. It is a Legion project that will continue, and be a reminder to Canadian troops abroad that they are not forgotten,” said Goheen.