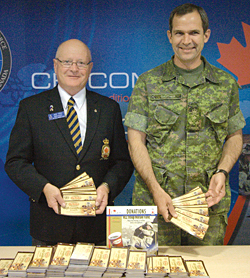 Dominion President Jack Frost (left) delivers $6,000 US worth of gift certificates for the Canadian troops in Afghanistan to Lieutenant-General Michel Gauthier.

With the high frequency of deployment for the Canadian Forces in Afghanistan, sustaining morale is crucial. Which is why now is the perfect time for The Royal Canadian Legion’s Troop Morale Fund to pick up and begin hitting its stride.

It is now more than six years since Canada committed to the United Nations and North Atlantic Treaty Organization effort and it’s rare to find an army soldier who has not yet been to Afghanistan. Many have been two or even three times over the years.

To mark the campaign’s success, Dominion President Jack Frost presented $6,000 US worth of Tim Hortons gift certificates to Lieutenant-General Michel Gauthier, commander of the Canadian Expeditionary Forces Command. All purchases at the military bases in Afghanistan are in U.S. funds

“We want to send this amount of certificates on a weekly basis,” said Frost, “and our branches are going to make that possible. Many of them have come up with ideas on how to raise the funds and are putting them in place. Our troops deserve this type of support and they will get it from the members of The Royal Canadian Legion.”

This bundle of 3,000 coupons, each redeemable for one coffee and doughnut, did not wait around Ottawa to get stuck in with all the other mail and supplies headed for Afghanistan. Instead, these coupons were hand-delivered to Kandahar Airfield, VIP-style, by Jim Peverly, director of Deployed Operations for the Canadian Forces Personnel Support Agency (CFPSA).

There is perhaps no organization better suited to partnering with the Legion on the issue of troop morale than the CFPSA. While the Legion has a long and notable history of caring for the well-being of deployed military members, the CFPSA now has that exact same mandate–one that it takes very seriously.

“The CFPSA runs welfare programs for deployed operations,” said Peverly, who has made the trip to Afghanistan several times. “I’ve seen and heard the appreciation the soldiers have for this morale program.”

The Legion sponsors Canadian Forces programs through the CFPSA with the donation of money or resources to the tune of $90,000 per year at the national level. The money also supports show tours and Canadian Forces sports programs.

“They help us make it all happen,” said Frost. “This program gives the member of the Legion, or even the general public donator, a chance to do something concrete for our troops,” he concluded.

Though Peverly said he’s looking forward to the trip to Kandahar, he noted that he’s aware of the danger involved. “It’s very austere. There’s always a risk, even for those who don’t go outside the wire.”

Nonetheless, Peverly added, “There’s always a strong link between the serving military and the Legion, and this just reminds the soldiers of that link. Tim Hortons provides a taste of home.”

The presentation marks the second purchase of gift certificates, with more scheduled to take place as often as possible. Once purchased, the certificates are stamped by Dominion Command so that the troops are made aware of who is responsible for the donation.

“On behalf of our men and women serving their country in Afghanistan, I want to thank The Royal Canadian Legion for their outstanding show of support,” said Gauthier. “These gift certificates will go a long way in giving our soldiers in harm’s way and so far away from Canada a true taste of home.”