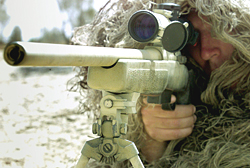 The House of Commons was in an uproar April 25 over ongoing allegations that Canadian soldiers in Afghanistan regularly turn over their prisoners to be tortured by Afghan secret police, and that the government was covering up the story.

On that very same April 25 the ombudsman for the Department of National Defence and the Canadian Forces issued a report that received relatively little attention, but which was (and is) a very important document.

The report, entitled A Sniper’s Battle–A Father’s Concern was three years in the making. It was an investigation into allegations made by the father of Master Corporal Graham Ragsdale, the leader of a 3 Princess Patricia’s Canadian Light Infantry sniper team in the 2002 Canadian deployment to the Kandahar region. The complaint was that members of the sniper team had been ostracized by CF commanders. The ostracism was alleged to have occurred after an incident wherein the Canadian Forces National Investigative Service examined a complaint that one of the snipers had shown disrespect to the corpse of a dead Taliban fighter shot at very long range.

Ombudsman Yves Côté investigated the pre-deployment preparation of the sniper team, its operations, and its post-deployment treatment especially in regards to the issue of whether or not the team was given adequate and proper post-deployment critical incident stress counselling opportunities.

Côté reported that his investigative team “found that the sniper team was properly resourced and trained” and that the evidence “does not support allegations of unfair treatment of the snipers.” More to the point, the ombudsman found that “Concerning peer-to-peer stress counselling, 3 PPCLI championed the concept and took steps to ensure that a significant portion of unit members received appropriate training.” He noted that “the Canadian Forces took reasonable measures and provided adequate care to the snipers, including M.Cpl. Ragsdale.”

At the same time, however, the ombudsman noted that “the investigative team faced considerable resistance in obtaining complete documents in a timely manner from DND and the CF, a problem the Office of the Ombudsman had not encountered previously in an investigation. Although, in the end, investigators were able to access and review all relevant documentation, the ability of the office to treat the complaint in a timely and effective manner was hindered.”

How much was it hindered? The complaint was originally referred to the ombudsman by the chief of the defence staff on Sept. 20, 2004, more than two years after the alleged failures took place. The investigation and the report were not concluded for a further 37 months.

To put this matter simply: the allegations of DND/CF mistreatment of the sniper team were wrong, but bureaucratic foot-dragging kept M.Cpl. Ragsdale and his family (and by implication the families of the other members of the sniper team) from knowing this for five years. That is simply unacceptable.

In the press conference that launched the report, Côté declared: “When Mr. Ragsdale started to inquire about his son, bureaucracy took over. And it was a blind and uncaring bureaucracy.”

The report demonstrates a rather stark contrast between the way 3 PPCLI and presumably its commander at the time, Colonel Pat Stogran, handled matters relating directly to the sniper team and the way the bureaucracy at National Defence Headquarters circled the wagons as soon as the matter was raised.

The unit at the cutting edge took appropriate care of its men; the paper pushers at NDHQ tried to make the problem go away.

The Office of the Ombudsman was established in 1998 as one of the major reforms to emerge from the Somalia Affair era. In all the investigations, hearings, reports, and studies that were done in the wake of the affair, one consistent theme (among many) was that there was no way that anyone in the CF chain of command could have his or her legitimate grievances examined impartially by someone with authority.

This was a theme that soldiers themselves reiterated and which experts took up because of its direct impact on morale and discipline. Other militaries (the United States is a good example) have inspector generals who have extensive powers to hear complaints and investigate them. In fact, in some countries, they can completely bypass the chain of command in following up a complaint.

In Canada’s case, the high command vigorously opposed the creation of an inspector general’s office because, from its point of view, an inspector general might play havoc with the chain of command. Thus the government created the DND/CF ombudsman instead. And no matter how effective the ombudsman is judged to have been, the office serves a crucial purpose in providing a “last resort” for CF members who feel aggrieved.

There are two lessons that must be learned from the Ragsdale case.

The first is that an ombudsman who has to fight the bureaucracy to obtain basic information that is needed to resolve a complaint is a lion with no teeth. Such a situation will most assuredly have a negative impact on morale, confidence in the chain of command, and discipline.

The second is that in an all-volunteer military in a democratic state it is simply dumb not to be as sensitive to the concerns of CF member’s families as common sense will allow. M.Cpl. Ragsdale chose to serve his country. His country in return has invested a great deal of time and money in his military career and simply cannot afford to risk losing him by alienating his family.

The time is long past when the military can take the approach that a CF member’s family can take a hike if they have concerns about his welfare. That attitude will only make the CF’s ongoing retention problems even worse.

Editor’s Note–David J. Bercuson is the author of a report which recommended the creation of an inspector general for the Canadian Forces commissioned by the minister of National Defence following the termination of the Somalia Commission of Inquiry in 1997.