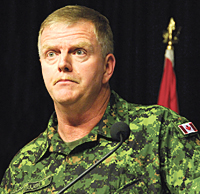 Ironic as it may seem, the defence establishment of Canada is actually finding itself in a worse position under the government of Stephen Harper than it was under the prime ministership of Paul Martin. And it is mostly the fault of Martin’s predecessor, Jean Chrétien.

Everyone knows that the Chrétien government slashed and burned the defence budget in the years between 1993 and 2000. The result was a dramatic shrinking of the Canadian Forces at exactly a time of a rising operational tempo. The problem was exacerbated by 9/11. It was added to by gross political interference in several major procurement projects such as the Maritime Helicopter Project and the purchase of the “slightly used” British Upholder submarines. There were also constant delays of decisions to replace old and worn out equipment such as the older part of Canada’s C-130 Hercules fleet which now has, on average, more than 40,000 hours on its airframes.

Paul Martin was a far-from-perfect prime minister in many ways, but in the course of his leadership campaign, he came to two very important and related conclusions. First, Canada had slipped badly in international influence, largely because of befuddled talk at Foreign Affairs about spreading Canadian values abroad instead of serving Canadian interests. Second, serving Canadian interests and trying to re-establish a modicum of international influence could only be done by strengthening the instruments of Canadian foreign policy and bending them to serve a common purpose.

From this realization the International Policy Statement of April 2005, was born and with it a Defence Policy Statement that largely reflected the views of the then new chief of defence staff, General Rick Hillier. Hillier was given both the leeway to create the Defence Policy Statement and the support he needed in cabinet by Bill Graham, who was shifted from Foreign Affairs to National Defence after Martin was returned in the spring of 2004 with a minority government. He was given some of the funds he needed to carry out his vision in the March 2005 federal budget when Finance Minister Ralph Goodale allocated over $12 billion to National Defence from 2005 to 2010.

So far, so good. Hillier’s plan was somewhat controversial in that it focused Canadian defence planning on rejuvenating “failed or failing” states, which were said to pose major problems for international peace and security, but at least it was a plan that the government was both committed to and even prepared to begin to fund.

The plan represented the commander’s intent, it told the army, navy and air force what its near future would look like, and it presented a rational basis to rebuild a military that Jean Chrétien had caused to languish.

Then came the Conservative victory of January 2006. Most advocates of an effective Canadian military cheered. Tories were always more friendly to the military than Liberals. Besides, Prime Minister Stephen Harper made very clear by visiting Canadian troops in Afghanistan on his first visit abroad and in a number of speeches on bases across Canada that rebuilding and expanding the Canadian Forces was a high priority of his government. He backed up his words in the March 2006 budget by adding over $5 billion to what the Liberals had already allocated and by initiating several long-overdue purchases of new kit.

All that was well and good, but the Harper government’s marching orders to General Hillier were that he was to fulfil four main tasks: fix the forces; expand the forces over the near term; prepare the forces for coming decades; and fight the war in Afghanistan’s Kandahar province to which the Liberals had originally committed.

Hillier and his staff set out to produce a capstone planning document that would, in effect, be Canada’s new defence white paper. It was referred to inside National Defence Headquarters as the Strategic Capability Plan. When the plan was costed out, the military discovered that it was going to be a lot more expensive than anyone had imagined. Why? Because the Chrétien government had almost completely broken the Forces and the Martin government had had neither the time nor the funds to make the basic fixes that were required.

Sometime in late 2006 or early 2007, the Harper government told Hillier that no more money would be allocated to the Forces in the immediate future. That was the result of a political calculation. The opposition and certain commentators were already beginning to bemoan Harper’s alleged obsession with military spending. With an election certain within the next year or so, the government was backing off, at least for now. The draft Defence Capability Plan was dead on arrival. Hillier was stuck with the decision of what current capabilities to chop in order to meet his four-fold mandate.

Predictably, the navy and the air force began to play chicken. The navy publicly threatened to cancel Atlantic Coast fisheries and sovereignty patrols for lack of funds for fuel and the air force mused about cancelling the long-awaited purchase of fixed-wing search and rescue aircraft and instead using re-engined, 40-year-old, Buffalo aircraft to do the job.

As of late February, NDHQ had no plan in place to replace the Strategic Capability Plan, not enough funds to make everything work, and a government mandate that cannot be carried out without a commitment of at least $25 billion more in funding. The navy and the air force are not playing ball with the CDS and a new round of intense fighting is expected in southern Afghanistan.

Whatever the outcome of this looming crisis, one thing is certain. The next few months will be General Rick Hillier’s greatest challenge as chief of defence staff while the fate of the Canadian Forces over the next decade is on the table.