Home » Our Veterans » Memoirs » A Tapestry Of Sacrifice

A Tapestry Of Sacrifice 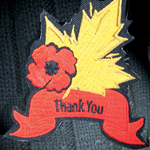 As a child I was always fascinated by those grainy pictures in history books of American Civil War veterans who lived well into the 20th century–50, 60 and even 70 years after their war experience. As I looked closely at their faces I wondered what their experiences were during the war. Little did I know that as I grew older I would continue with this fascination with my own father who spent six years overseas as a member of the Canadian Forces during World War II. His story for me has been an unfolding tapestry with new and more compelling detail being added all the time.

My father is now in his nineties. Only very recently have I come to fully understand the immense gratitude that I owe him and the many others who made incredible sacrifices for me and future generations. I have grappled with how I could express that gratitude.

My father, like many war veterans, has not been very forthcoming about his more horrific war experiences. I have had to be persistent to find out some of the details. I knew he had served in Italy, and I had a vague understanding that towards the end of the war he had fought in the Reichswald Forest, which I now know is located in Germany near the Dutch border.

In 1987 I travelled to England and Northwest Europe on a holiday and upon my return to Canada mentioned to Dad that I had spent a delightful day in Bruges, Belgium. Dad then described how he had spent six months in Bruges recovering in a military hospital from severe burns he had suffered as a result of a gas explosion in the Reichswald Forest towards the end of the war. I only became aware of this war experience more than 40 years after it had happened.

Not too long ago I was browsing in a Toronto bookstore and happened upon a book that described Canadian activity in Italy in 1943 and 1944. The book, The Gothic Line by Mark Zuehlke, had the rather dramatic subtitle of Canada’s Month of Hell in World War II Italy. On a hunch I flipped to the index and there was Dad’s name, Lieutenant Gordon Potts of the Royal Canadian Regiment.

I vaguely knew that I had been named after a man who had been killed beside my father in Italy. I never knew the circumstances surrounding this man’s death, but I learned from the book that Dad had been standing near his friend Eric–Captain Frederick Thomas Forgrave–in the courtyard of a villa near a major battlefield in northeast Italy, south of Rimini. Eric was shaving and cleaning up, getting prepared for his upcoming leave when all of a sudden there was a loud explosion and Eric was mortally wounded. Dad received shrapnel wounds to his chest and forehead. And so 60 years later, the colours in the tapestry of Dad’s war experience were becoming more vivid.

I wondered where Eric Forgrave was buried. And so I clicked onto the Commonwealth War Graves Commission website. Using the site’s search engine I discovered that Dad’s good friend was buried in Plot 2, Row G, Grave 59 in the Gradara War Cemetery about 20 miles south of Rimini in northeast Italy. One day I will visit this grave and pay tribute to a man Dad has described as a champion athlete and a born leader–a soldier who died in September 1944.

How does one appropriately thank the many veterans who have experienced these horrors of war? Whatever gratitude one can muster will never be enough. During the Year of the Veteran in 2005, Scouts Canada produced embroidered crests with three images–a poppy, a maple leaf and the words Thank You. I obtained one of these crests through my father-in-law, an air force veteran, and had a local tailor sew it onto a black sweater. I mailed it off to Dad who now lives in a seniors’ residence which ironically overlooks the Bedford Basin in Halifax, the embarkation point for thousands of Canadian and Allied soldiers, many of whom never returned.

It has taken a lifetime to gather much of the detail of Dad’s war experiences. I have only recently come to understand the underlying horror of what he and others went through. I want to say thank you Dad, and thank you to all the veterans who have given so much. Your sacrifices mean a lot to me and to many others–they will never be forgotten.