Taking A New Approach To Command In The Canadian Forces 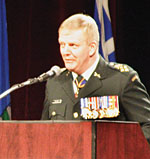 Chief of Defence Staff General Rick Hillier presided over a ceremony that marked a significant moment in the transformation of the Canadian Forces Jan. 31 in Ottawa. With four new commands being stood up and the former deputy chief of defence staff group being dissolved, this was a concrete step toward reshaping the Forces.

To be sure, these were not token changes. The new Expeditionary Force Command, Canadian Operational Support Command and Canada Command entirely change the way the CF controls and responds to missions, both in Canada and abroad. Additionally, the Special Operations Forces Command adds a whole new set of capabilities to the Forces, augmented by the creation of a new regiment–the Canadian Special Operations Regiment.

As Hillier said at the ceremony, these changes are all about shaping the CF to meet current and emerging threats, not the needs of the past. “CF transformation is based on meeting the threats of a new security environment therefore operational effectiveness is at its heart,” he said. “It is built on lessons learned by CF members who have cut their teeth on operations.”

During the ceremony, which took place at the Ottawa Congress Centre before an audience of what appeared to be every single officer from National Defence Headquarters, the four new operational commanders were introduced and a brief overview of their commands was given.

Canada Command is being called the cornerstone of CF transformation. For the first time, there will be a single officer, reporting directly to the CDS, overseeing an integrated chain of command at national and regional levels who is responsible for all domestic operations.

Though Vice-Admiral J.Y. Forcier was introduced as the first commander of Canada Command, he did not last long in the position. Forcier announced his retirement, due to personal problems, in early March. His successor will be named shortly.

Under the new CF structure, Canadian Expeditionary Forces Command (CEFCOM) is the unified command that is responsible for all CF international operations, with the exception of operations conducted solely by Canadian Special Operations Forces Command elements. CEFCOM’s first commander is Major-General Michel Gauthier.

Similar to the integrated chain of command put in place under Canada Command CEFCOM will bring together under one operational command the maritime, land and air force assets to conduct international humanitarian, peace support or combat operations.

Headquartered in Ottawa, CEFCOM will have several organizations under its command, including a new Standing Contingency Task Force that will be established to respond rapidly to emerging crises.

This high-readiness task force will be made up of maritime, land, air and special operations elements organized under a single integrated combat command structure. It will be ready to deploy within 10 days’ notice and will provide an initial CF presence to work with security partners to stabilize the situation or facilitate the deployment of larger, follow-on forces. The Disaster Assistance Response Team will also be under CEFCOM command.

Brigadier-General Daniel Benjamin is the new commander of the Canadian Operational Support Command (CANOSCOM). His new command is tasked with providing support to all CF domestic, continental and international operations. In doing this, CANOSCOM will generate task- tailored operational support organizations for the three new operational commands.

CANOSCOM will also be responsible for planning and executing the delivery of national-level operational support for theatre activation, sustainment and termination of a Forces operation.

By the end of the ceremony, it was clear that from Hillier on down, the CF was eager to simplify and streamline its old command structure to meet new challenges, and with these four new commands, it has made some concrete steps toward making that happen.