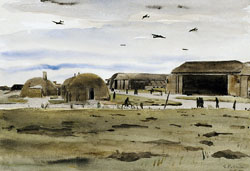 Grey Day on a Station.

Canadian war artist Goodridge Roberts was born while his parents were vacationing in Barbados in 1904. He was raised in a family of editors, poets and writers, but from his earliest years was determined to paint. In 1923, he enrolled in the École des Beaux-Arts in Montreal where he studied for the next few years. In 1925, his family sent him to the Art Students League in New York. 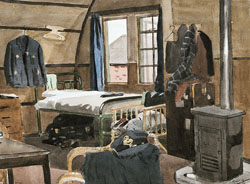 When World War II broke out, Roberts was working as an artist and teacher in Montreal. He was keen to become a war artist, but was worried that he would not be accepted or not up to the job–or even not healthy enough for the task. He wrote, “My chief worry is that I may fail to come up to the expectations of those who are making this venture possible for me. In a sense the fact that the work is to be primarily a record makes the responsibility of the artist greater than if he were to be producing pictures for immediate propaganda use. For in the one case real artistic worth is a requisite, while in the other a certain aptness and honest workmanship would be enough. I am not particularly modest about my own abilities, but I am not so self-assured that I can begin so responsible an undertaking without some self-questioning.” 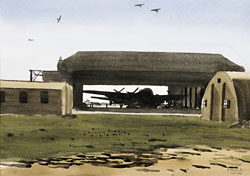 Lancaster in a Hangar.

Nevertheless, Roberts was keen to contribute and in 1943 enlisted in the Royal Canadian Air Force. He was quickly commissioned and appointed an official war artist. That fall he was sent overseas, but found the English winter trying. As a result he spent much of his time working indoors on pencil portraits. Starting in early spring, the artist also painted scenes at the Royal Air Force Coastal Command airfields in the southern England and at Bomber Command airfields in Yorkshire and County Durham. Yorkshire and its neighbouring territory was where 6 (RCAF) Bomber Group operated from during the war.

His aversion to the damp English climate has seeped into his paintings. In one watercolour, a Lancaster bomber crouches in a hangar, black and menacing. In another, planes swoop over the airfield like crows. His colours are dreary and reminiscent of camouflage, truly appropriate for wartime.

Roberts died in 1974, but left us 118 drawings and watercolours from his time as a war artist. He became more widely known in later years as a painter of landscapes, figures and still life, though his landscapes were often overshadowed by the dramatic works of the Group of Seven. In spite of this, Roberts stayed devoted to his craft and produced more than 3,000 paintings, drawings and watercolours throughout his career.