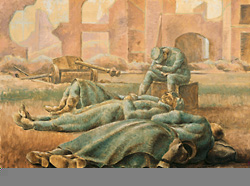 Alex Colville began his 60-year career as a war artist, and his lifetime of work has sustained his signature aloofness from those days. Understandable for a 24-year-old artist trying to survive the war and needing enough distance to keep from being completely overwhelmed.

He was born in 1920 in Toronto, but spent most of his childhood in Nova Scotia and graduated from the Mount Allison University School of Art. Colville enlisted in April 1942 and served with the infantry. Even though he was talented, he could not become an official war artist unless he became an officer. He received his commission in the fall of 1943, and was sent overseas in May 1944. Colville served as a war artist until June 1946. From late October 1944, through the Hunger Winter in Holland, until the 3rd Canadian Division crossed the Rhine the following year, Colville sketched the progress of the division. One of his last assignments was a stop at Bergen-Belsen concentration camp, and even there among the thousands of dead and dying, his work remains calm and remote.

In 2000, Colville created a self-portrait, titled Studio, which in some ways closes the circle. Nude, the 80-year-old stands vulnerable, facing the end of his days. In it we see the shadow of death, shades of World War II.

Colville’s works are as familiar to Canadians as our own flag. An icon in the world of Canadian art, he stands alone, and whether he chooses a group of exhausted soldiers or one sentry to paint, we feel the quiet, the detachment of each individual. Seldom do his subjects make direct eye contact with the viewer. Even his colours emphasize this theme, subdued and sepia.