Going Through The Hoops To Be In The Forces 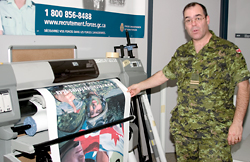 When Canada was gearing up for war in the early 1940s, joining the military was pretty easy—jog on the spot for two minutes, a quick dental exam, then grab your new kit and head for the training unit—waking up one morning as a farmer in Brandon, Man., or Belleville, Ont., and waking up the next morning as a soldier wasn’t uncommon.

These days, joining the forces is not so quick or so easy. Now, only about 30 per cent of applicants endure the volumes of paperwork, background checks, aptitude tests and an average wait of more than two months, if they’re lucky. Some wait years to finally become enrolled. Last year nearly 8,000 applicants simply gave up and withdrew in mid-process.

The organization in charge of the process, the Canadian Forces Recruiting Group, or CFRG, has recently come under fire for these delays and for what critics say is an over-bureaucratized and inflexible approach to staffing the military.

Colonel Kevin Cotten, the CFRG’s commanding officer, argues the delays and complaints are caused by lengthy but unavoidable security checks, incomplete recruit paperwork and by a little known fact—many may apply to the Canadian Forces, but only the very best are chosen.

“Sometimes it can be a hard thing to accept ‘What do you mean I’m not good enough for the Canadian Forces? I thought the CF would take anybody.’ Well, wrong. We have a very high standard actually,” said Cotten.

Last year more than 24,000 Canadians applied to the CF but only 8,496 were selected and enrolled. Not all, or even many, of the unselected soldiers are officially denied; many thousands are kept in the process, just in case the CFRG hits on lean times. That means that huge groups of potential soldiers are stuck waiting for an opening, waiting for a period where competition isn’t so strong. While this may be the best solution for the Forces, it does leave thousands of applicants in limbo and it’s not clear whether these applicants understand their situation.

“What I’d like to be able to do is tell people sooner in the process that based on what we’ve seen before (they) are not going to be very competitive when we go to selection,” said Cotten, “At least we can try to explain to them that (they) may be waiting quite a while because new blood keeps coming in and it gets selected over (them).”

Beyond the delays associated with the over-abundance of applicants in the easy-to-recruit-for combat trades, the CFRG has come under increasing pressure to find a way to solve the shortage of highly skilled applicants, like dentists, doctors and engineers.

And, now that Paul Martin’s government wants troop strength increased by 5,000 regular force and 3,000 reservists, the challenge facing the CFRG is getting even tougher.

Not everybody believes they are up to the task. Military Ombudsman André Marin has received 726 complaints from applicants dissatisfied with the recruiting process, over two thirds of which cited lengthy delays as a major problem.

“I think the recruiting system is broken,” said Marin. “There’s obviously a huge issue. How many are out there that have not yet complained?”

In response to the complaints his office received, Marin launched an investigation into the recruiting process in September 2004. Though his final report won’t appear for a few months, Marin’s interim reports describe a system mired in bureaucratic thinking, rife with arbitrary and unfair treatment and barely coping with demand.

Despite all these challenges and criticisms, the soldiers in charge of recruiting aren’t worried because they have a plan to get it all done, a plan they say is innovative, designed to shorten delays, attract the skilled, increase feedback to applicants and, they hope, silence the critics.

The CFRG Multimedia Services lab was established nearly three years ago in downtown Montreal. Tucked away in a dim, open-concept space and surrounded by dozens of computer displays, the 13 Department of National Defence civilian employees and their CF boss, Captain Francis Arsenault, produce everything the military needs to entice young Canadians into the Forces.

Their most recent product is a CD-ROM-based recruiting kit for the air force that provides, among other things, descriptions of all the force’s aircraft and videotaped interviews with pilots who candidly describe life in the air force. The CD-ROM, and much of the digital lab’s other work, is very slick and cool, full of the style and interactive whiz normally delivered by high-end design firms that cost megabucks. Arsenault seems to have hit on a new hybrid civilian-military business model that combines the freedom to do creative work within a strict produce-or-be-fired framework.

“We hate bureaucracy. We want to make it very easy for people to do their job,” said Arsenault, who before he became a digital guru was an air force controller. The recruiting tools Arsenault produces are largely intended to appeal to the younger, technology-literate generation.

“As soon as you put (recruiting material) on a mini-CD-ROM, that’s something that catches a kid’s eye more than a poster will. They’re interactive and they want that interaction, they’ve grown up with that technology,” said Cotten.

Arsenault and his team of digital designers are also helping to implement the new online recruiting program, one of the central elements in the CFRG effort to reform the enrolment process.

When the full system goes online this summer, Canadians across the country will be able to complete their applications over the Internet. Besides attracting more applicants, especially tech-savvy youth, the online recruiting system is designed to speed up and clarify the whole process by allowing applicants to access the status of their application online, so they can see immediately if more information is needed, or just where they are in the system.

Though online recruiting has been tried once before, in the late 1990s, this time the CFRG is committing itself to making it work. If all goes according to plan, the new system should remedy some of the major inefficiencies of the current process.

“I think that’ll be a great initiative,” said Marin. “I think the communication between the applicant and the organization is key, so that applicants will know if there’s a record missing, an issue or a hitch in their application. I think that would be a very worthy endeavour.”

CFRG isn’t putting all their hope into pixels and Web sites, however, they’re also using the most basic method to attract applicants—money, and lots of it. The revamped bonus system provides big chunks of cash to skilled Canadians willing to sign up: an engineer gets a $40,000 bonus while a doctor gets $225,000. And though there has been some success—a recent posting for three engineering positions received 43 applications—there has been little luck recruiting doctors.

Another issue the CFRG faces is attracting new recruits without misrepresenting the military lifestyle. Despite the high operations tempo, some soldiers leaving the CF have argued that the overall lifestyle of the enlisted soldier—living in cramped and often rundown quarters, dealing with intense bureaucracy and rarely getting out for exercises or operations is not what they were led to expect. The recruiting material does have a strong focus on the more dramatic events of a soldier’s career, photogenic moments like international missions and weapons exercises. Cotten argues that though these “Hollywood-quality” periods may only comprise 10 per cent of a soldier’s time in the CF, the images do not produce false expectations for the recruit.

“If we start them off on the wrong foot, that’s going to come back and plague them later on. But the retention aspect to me is a function of leadership at the unit level right up and down the chain,” explained Cotten, before going on to argue that images of patrolling through Kabul, for example, are key to recruiting because they represent the peak experience and the greatest challenge a soldier is likely to face. “Ultimately that’s what we’re going to ask you to do and if you can’t measure up, if you’re not ready to do that, you’re not a good fit for our organization.”

“For the young person that’s joining for the adventure, I’m not going to apologize for our message, it’s a very competitive labour market out there and a lot of people are vying for their attention,” said Cotten. “There are quality-of-life issues and hopefully good leadership can take care of some of that. But the reality is you’re not always in the field, there is some mundane stuff as part of any soldier’s routine, as there is in any job. It’s not going to be excitement all the time.”

It remains to be seen if the CFRG can meet the upcoming challenges—recruiting 8,000 additional soldiers, responding positively to the ombudsman’s report, striving to make the process more user-friendly.

“We’ve been putting a lot of staff effort in but haven’t reaped any of the benefits yet, so I’m looking forward to where we roll it out and, once it’s up and running, let’s see how much better we are as a result,” said Cotten.

Whatever happens, it’s clear the CF have come a long way from accepting just any warm body. With only about one applicant in four making it to active duty, the CF are even more selective than elite American special forces units like the Army Rangers. Only the best and brightest make it into the CF and every Canadian can be proud of that.