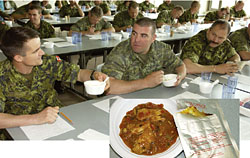 Rations are introduced (inset) and sampled.

History credits Prussia’s Frederick the Great with defining an army as a “group of men who demand daily feeding.” Nicole Bélanger-Drapeau knows exactly what he meant.

As project director for the Canadian Forces’ combat rations program, the Ottawa-based dietitian oversees the in-the-field nutritional needs of 55,000 military personnel. Not only is she responsible for selecting the one million to 1.5 million Individual Meal Packs (IMPs) the Department of National Defence buys every year, but she has to ensure that military personnel like them. And Canadians’ evolving taste buds mean this is not a simple job.

When she started her work in rations 18 years ago, the word vegetarian was all but unknown within the armed forces. Today, with vegetarian restaurants sprouting across Canada and at least five per cent of Canadians declaring themselves vegetarians, the military has had to adjust. In the field, this means that meatless meals are now available for breakfast, lunch and dinner. To meet religious dietary requirements, kosher and halal meals can also be supplied. The situation is the same in the United States, where every case of 12 MREs (meals ready to eat) now contains two vegetarian selections. In both Canada and the U.S., the vegetarian meals do not contain any ingredients derived from animals or animal byproducts.

No one is more aware of the changing attitudes toward nutrition than Chief Petty Officer 2nd Class Gerry Westlake, who is in charge of training new cooks and stewards at Ontario’s Canadian Forces Base Borden. He said the results are showing up in military chow lines.

“I just transferred here from a ship, and every meal we served had a vegetarian selection available,” said Westlake, who has been feeding sailors and soldiers for 19 years. “Fifteen years ago you didn’t have that—we’d just fry it and serve it.”

But if there is growing recognition of the close connection between diet and health, military-based research is at least partially responsible.

In a landmark study published in the Journal of the American Medical Association in 1953, three U.S. army surgeons reported the results of autopsies conducted on 300 American soldiers killed in action or accidents during the Korean War. The soldiers had an average age of about 22 years, with the youngest being 18 and the oldest 48.

The results were frightening. “In 77.3 per cent of the hearts, some gross evidence of coronary arteriosclerosis (hardening of the arteries, the major cause of cardiac disease) was found,” the authors wrote. Despite the soldiers’ relative youth, in three per cent of cases at least one major blood vessel was already suffering from “complete occlusion (blockage).”

Although research into cholesterol and other cardiac risk factors was still in its infancy at the time, the authors pointed out that studies involving Korean men showed relatively few cases of arteriosclerosis. About their own study, they concluded that the results “strongly suggest” that dietary factors played an important role in heart health.

In the 51 years since that study was completed, said Bélanger-Drapeau, a revolution has taken place in the approach to military nutrition. Asked what changes a World War II veteran would see in today’s meals, she commented: “Oh my God, they’re not even comparable, either in quality or the variety available.”

Or in the attention that is paid to nutritional details.

Major Carol Schell, an operations specialist in the armed forces’ food services section, said all food provided must meet the standards outlined in the Canada Food Guide to Healthy Eating. Among other things, no more than 30 per cent of the energy can be provided as fat, and no more than 10 per cent as saturated fat. The diet must also provide for reduced sodium content and contain no more caffeine than the equivalent of four cups of regular coffee per day. “We provide the food and individuals make the choices,” adds Schell. “If they want to eat fries every day, we don’t preach to them.”

Westlake said it is much easier to meet healthy-eating requirements today because civilian demand for these cooking products is now so high it is easy for the military to buy them. “Fifteen years ago we’d cook everything in butter because options (like olive oil) weren’t widely available. That’s not the case today.”

In fact, everything has changed so drastically on the military food front that war veterans would be astounded by everything from the quality to the variety of today’s field rations.

In his WW I memoir Ghosts Have Warm Hands, Will Bird recalled his arrival in France in 1916 and the culinary delights available at a camp near Le Havre: “At mealtime we waded through the slime to the door of a long dirty hut. Inside, a trio of unwashed characters broke up loaves of bread and tossed a chunk to each man, the size depending on your luck. Another pair poured each man a tin of cold, greasy tea and you received a piece of stringy meat in your mess tin. You ate with your fingers, and everything was dirty. An officer and sergeant entered at the front. At the rear door they paused just long enough to shout: ‘Any complaints?’ They vanished before anyone could reply.”

In WW II, George Blackburn’s luck wasn’t much better. In his book The Guns of Normandy he describes one particularly vile breakfast offering. “(It was called) pre-cooked bacon. Cold, it plopped out of the can in a sickly white, cylindrical blob. Heated, it turned into liquid grease, which when poured off left a pitiful residue of red strings representing the lean meat that had streaked the fused rashers.”

Nothing provides a better example of how times have changed than a comparison of a Composite Ration Pack from WW II, which was designed to feed 14 soldiers for a day, and the IMPs today’s soldiers receive in the field. In Normandy, the 14 soldiers who got the Type E “compo pack” dined this way:

Today’s soldiers can select from 18 different IMPs in a given year. The meals, introduced in 1983, each contain about 15 food and five non-food items. For example:

All meals include condiments such as steak sauce as well as coffee, sugar, whitener, pepper, salt, plastic spoon, moist towelette, matches, paper towel and a toothpick.

The overall cost of the food served today is about $75 million per year. The IMPs, which range in price from about $10 to $11.50 each, cost about $15 million annually. The other $60 million is spent buying food for base dining halls or ships’ galleys.

The IMPs have a shelf life of three years. In June, with that three-year limit approaching, Canadian soldiers ate 19,000 of the meals over one three-day period in Kabul, Afghanistan, in order to ensure that none became stale-dated.

Each meal provides 1,200 to 1,400 calories, or a total of more than 3,500 a day. The entrée is packed in a thin, flexible “retort pouch” that allows quick heating. And although they are designed to be consumed for only 30 consecutive days, Canadian soldiers sent to Somalia a decade ago ate them throughout their six-month tour.

Bélanger-Drapeau said new meal choices are added regularly, but only after in-the-field testing by at least 60 soldiers, who then grade the product. To be added to the menu, a score of at least 6.5 out of nine is required.

Not all get a passing grade. For instance, soldiers were underwhelmed when spaghetti with meatballs was tried. “They said the flavour wasn’t right,” she said. That message was passed along to the manufacturer, who produced a spicier sauce. The meal is now on the menu. Other meals are removed. The infamous ham omelet was dismissed with ignominy in 1992.

Although there are ration standardization agreements within NATO, Bélanger-Drapeau said the differing national tastes are readily apparent. Dutch military meals, for instance, often feature pâté. This may appeal to Dutch troops and “taste very nice,” she said, “but put yourself in the shoes of the 18-year-old from Saskatoon.”

Back at the military’s cooking school at CFB Borden, where Gerry Westlake trains about 250 new cooks a year, the instructors pay close attention to culinary developments. “We try to keep up with all the trends,” he said. “We also keep in touch with the local colleges like George Brown, which produces a lot of chefs, to find out what they are hearing.” Westlake said it takes just 84 days to train a new cook. They return for more advanced training as their careers progress.

Overall, the need for cooks has dropped substantially. Today about 1,100 are stationed across Canada, on ships and overseas. However, there are 30,000 fewer mouths to feed today than in the mid-1980s, when regular-force strength stood at 85,000 personnel. In some cases the military has switched to using civilian contractors to provide meals, even on overseas deployments to Bosnia and Afghanistan.

Schell, who describes herself as a “trouble-shooter” within the food services section, said food-borne health hazards such as bovine spongiform encephalopathy (mad cow disease) and E.coli-type illnesses have created a new level of concern. “We’re very cognizant of food safety,” she concludes. “If you have 1,000 troops in the field and they all have diarrhea, how much use will they be?”

Led by three former generals, a group of Canadian veterans has evacuated more than 1,500 Afghans who faced potential reprisals from the conquering Taliban, spending more than $2.4 million in private donations after Ottawa abandoned its effort.