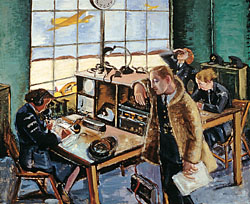 Paraskeva Clark believed the art of a nation is not made by a few elite artists of the time, but by the many who give us variety in subject, composition, technique and ideology. Her beliefs came naturally.

Born in St. Petersburg, Russia, in 1898, Clark studied at the Free Studio. Widowed in her early 20s, she moved to Paris with her infant son. When her boy was of school age she took a position as a salesgirl in an art gallery, where she met her second husband—a Canadian. In 1931, the couple married and then moved to Toronto.

Her international experience made her a welcome addition to the Toronto art scene, but life for her there came as a bit of a shock after the lively creativity of Paris. Clark wanted Canadians to embrace more than wilderness landscapes. She wanted us to include the varied scenes and faces of urban Canada in our traditional mix. “In our overgrown ‘pioneering’ delight in our wilderness, we neglected the study of the pioneer, of the man. And we must not continue this sad mistake…. (Art) will have to be useful, clear—human above all,” she wrote. 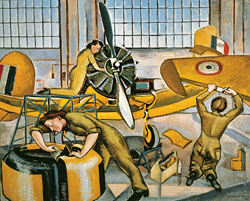 Maintenance Jobs in the Hangar.

By the fall of 1941, the German armies had besieged her native city. Clark dedicated her energies to the war effort and Russian-Canadian relations. In May 1944, she wrote to Harry McCurry at the National Gallery to express her disappointment at not being chosen as a civilian war artist. He agreed, and eight months later she was commissioned to paint the activities of the Royal Canadian Air Force Women’s Division at Trenton, Ont. After an initial struggle, Clark delivered Parachute Riggers to the Gallery in 1947. The lively composition and angular postures of the women in this canvas lend it the feel of a modern editorial illustration. The influence of Cézanne and Picasso are clear in her work. She painted three canvases for the war records, and was invigorated by the experience. 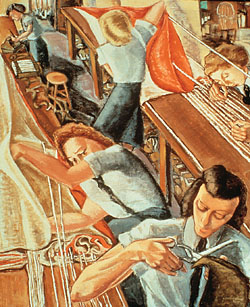 The artist spent the next 20 years turning out wonderful portraits. Although she was critically acclaimed in Canada, the Cold War years were difficult for her. She was a fierce proponent of Russia, but there was no longer an audience for her beliefs. After turning 80, she stopped painting. She never believed she or any woman could be a great painter. She felt family commitments, domestic chores and the need to mother kept female artists from immersing themselves in their work and reaching their potential. In her case, the critics disagreed.

Clark died in Toronto at 87.

PrevPrevious ArticleVimy And More: Part 6 of 18
Next ArticleArt On The RocksNext