Home » Defence Today » Eye On Defence: Making Do Is No Solution

Eye On Defence: Making Do Is No Solution 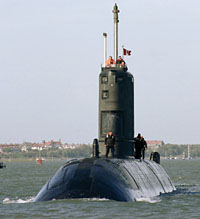 HMCS Windsor, one of Canada’s four new submarines, heads out to sea.

The army is currently planning to spend some $600 million on converting its now virtually useless tracked Air Defence Anti-Tank System into a wheeled Multi-Mission Effects Vehicle (MMEV) to supplement the Mobile Gun System it is soon to acquire to support infantry on the battlefield.

There is a disturbing trend in Canadian defence spending: life extension programs and conversion projects have recently wasted billions of vital defence dollars. This isn’t a new pattern, either. The hundreds of millions of dollars spent on updating Her Majesty’s Canadian Ship Bonaventure in the 1960s, only to see it scrapped a bare two to three years after the upgrade was completed, is a now-legendary story of government profligacy.

Though the long-delayed Maritime Helicopter Project—and the hundreds of millions thrown away on cancellation penalties by Jean Chrétien’s government —is most often pointed to as the ultimate in recent Canadian procurement fiascos, it actually pales beside some other cases.

In early September, information surfaced via the Halifax Daily News that the Royal Navy was only able to get three of Canada’s four new submarines seaworthy (prior to them being handed over to the Canadian navy) by borrowing parts from the fourth, HMCS Chicoutimi. [Before the tragic fire in October,] the RN apparently wanted the Canadian Navy to lend them parts to get Chicoutimi going! The budget for spare parts and engineering support for the used subs has tripled from the original $86 million allocated in 1998 to at least $241 million. What that means, in plain language, is that a cash-strapped Department of National Defemce is on the hook for $155 million not factored into the original cost.

Then there is the case of HMCS Huron.

Huron is one of the four Tribal Class destroyers selected for upgrading and modernization in the late 1970s as part of the Tribal Class Update and Modernization Program, or TRUMP as the navy refers to it. The navy’s proposal was prescient for that time—turn sub-hunter destroyers into anti-aircraft and command ships to meet future threats. The decision actually anticipated the end of the Cold War.

TRUMP was a brilliant idea when first conceived. But the program took 23 years from original conception in 1977 to final completion in 2000. It also ran an eventual tab of $1.4 billion. Huron was the last ship refurbished and was delivered in 1995. Five years later Huron was deactivated. The navy didn’t have enough money to run her. In November 2003, Huron’s fate was sealed when the navy announced that she is to be scrapped.

DND spent roughly $350 million in capital improvements alone on Huron so that she could serve a new role for less than five years. It was hardly worth the price.

The army, too, has procurement horror stories to tell. One of those is the money wasted on new turrets for the Leopard tanks, announced in 1997 and finally acquired and installed by 1999 for a tank that was clearly doomed in Canadian service as early as 2002.

Another, more egregious case involves the still-ongoing M-113 Armored Personnel Carrier life extension project, with an eventual cost of more than $365 million. The project was approved in the fall of 1998. Designed to lengthen and strengthen the venerable M-113, the original plan was to modernize up to 406 vehicles. Cost overruns forced the army to pare that number to 289.

The M-113 was designed to carry infantry into battle as part of a mechanized brigade that included armour. Canada deployed it in the mid-1960s. Taxpayers might be excused for asking why the Canadian Forces decided to push ahead with the modernization of these vehicles in 1998—long after the Cold War had ended and long after the Americans and the British had relegated similar APCs to second-line status. It is especially puzzling in light of the problematic experiences Canadians had with the M-113 in peace-support operations in places such as Bosnia in the early to mid-1990s.

Just exactly why did the Canadian army think it needed tracked vehicles any longer in 1998, when its tanks had already been effectively sentenced to death? And why has the program been continued when the army has adopted “transformation” as its main goal, and the wheeled vehicles that go with it? It is completely unclear what vital role the refurbished M-113s will be playing in the new Canadian army. As the Chief of Review Services noted in his April 2003 report on the project: “It remains unclear that [the] current quantity of 289 vehicles represents a requirement for the future.”

These cases point to an obvious lesson: the Canadian military’s long tradition of “making do”—a tradition forced on the military by government insistence on fixing, rather than replacing—is often wasteful in the extreme.

There are a number of reasons why this happens. One problem lies in trying to transform outdated or obsolete equipment in the hope of applying it to new uses it wasn’t designed for in the first place. Another is in designing fixes to a piece of kit long after the doctrine for which the kit was developed is outdated. Finally, it is often harder and takes much longer to change something that already exists than it is to acquire something new. And in the long period between the launch of a life extension or conversion project and its conclusion, Canadian military developments have often evolved so as to render the original vision obsolete.

The military isn’t blameless in this waste of resources. Too often it endorses, indeed sometimes even embraces and celebrates, “life extension” programs as ends in themselves, as long-term solutions rather than as the temporary stopgaps they are.

That is precisely what the army is doing now as it champions the Multi-Mission Effects Vehicle project. This hybrid might turn out to be a useful piece of kit, but the recent history of CF conversion projects warrants an outside, objective look, perhaps by the Auditor General, before the project proceeds any further.