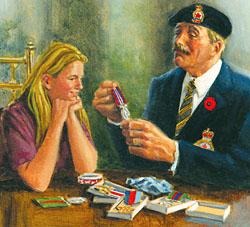 I remember the hustle and bustle that filled our house on the morning of November 11th. It was the 1960s and our small home in Summerside, P.E.I., was crowded: Ten kids, most of us dressed in Brownie, Girl Guide or cadet uniforms, ready to be rushed out the door to the Remembrance Day parade and ceremony at the cenotaph. Mom, a member of the Legion’s ladies auxiliary, was the busiest of all with her efforts to make sure we were fed and properly dressed.

My dad, Henry J. Gallant, would be busy as well. His Legion uniform would be pressed and ready to wear. Part of his morning would be spent at the kitchen table where he would quietly shine his black shoes until you could see your face in them. Then out came the war medals to be polished with the smelly polish in the tiny silver can. “From the war” he would say, if you asked him where he got them. “Just from the war.”

I was in awe while watching him bring his medals to a sparkling shine. ‘My dad went to the war and came home with medals,’ I would wonder. The sight of them made me think that he must have been a great soldier. And so I wanted to know what he was thinking about—what he did and what he remembered—but there usually wasn’t much time to chat during those mornings. The last thing Mom wanted was for us to be late, and she was excellent at keeping us moving.

Later, while the veterans stood straight and tall in front of the cenotaph, I continued to watch him, and wonder what he was thinking, especially during the silence. How vivid are his memories? What flashbacks does he have? Surely his memories were not all about the fighting. Surely he has many stories to tell about the everyday life of a soldier.

Over time, some of the stories did come out. I remember him telling me about the time he and a few other soldiers jumped under a truck to avoid an enemy air attack, only to discover that the truck was loaded with ammunition. He said it happened in Normandy, shortly after the June 1944 invasion.

He also told me about the close call he had when shrapnel sliced through his pillow while he slept.

I knew Dad was a survivor. He had left Canada in December 1942 on a convoy of roughly 100 ships from Halifax. After arriving in Scotland, he took a train to a small town roughly 30 miles from London. About a year later he was assigned to the 2nd Canadian Corps Headquarters, and spent the rest of the war in Europe with that unit. He was a mechanic and driver, and I remember seeing old black and white photos of smiling guys in uniform standing beside jeeps and other war machines. He has told us about the generals and other officers he got to drive around Europe with. However, he has also told me there are stories he will not share—stories he will take with him to the next life.

While in Europe, he fell in love with an English girl, a girl he soon married. Sadly, his new bride died of rheumatic fever before he could bring her to Canada.

I remember that while standing at the cenotaph I would also sneak peaks at the other war veterans in the crowd. Some were standing, others were in wheelchairs. I couldn’t help but to wonder about them, too, and the memories they must have. What did they remember, and will they ever share those stories with their children? How much of the war will they carry with them for the rest of their lives, so that we can enjoy the freedom we have in Canada—a freedom many of us take for granted?

Our war veterans made huge sacrifices, but I am sure many of them had no idea at the time just how great their sacrifice was. They just went off to do what had to be done. At the outbreak of WW II, Canada’s population was approximately 11 million. More than one million—roughly one in 10—enlisted in the armed forces. Approximately 100,000 were casualties and more than 45,000 died. During WW I—when Canada had a population of roughly eight million, roughly 620,000 men and women served. Of them, more than 66,000 never returned while nearly 173,000 were wounded.

The ones who did return from these wars and the more modern conflicts know they are the fortunate ones because many of them have had the opportunity to move on with their lives, get married, raise a family—grow old. Surely this is something that hits each and every one of them and not just on Remembrance Day, but every day of the year. They, perhaps more than other people, have realized the importance of making the most of life. Dad went on to work as a store clerk in Summerside and enjoyed that very much. He loves fixing and building things and enjoys telling jokes and stories.

Dad’s work with the Legion includes time as president of George Pearkes VC Branch, where he is a life member.

The Legion has always been important to him, and to my mother. It was where Dad could go to be among close friends. And I am sure many of them can recall the letters from parents and girlfriends, the care packages from home, the guy who always had a joke or a funny story, and then was suddenly gone. I wonder if most of them remember the good times or just the moments filled with fear and loneliness. Could it be that they had so much to remember and perhaps more to forget?

When I saw the movie The Memphis Belle, I was struck by the age of the actors on screen. They were so young, and I thought about my father’s age in the war. I guess, like any child, I thought Dad had always been the person I knew growing up, but he wasn’t. He was just a kid during the war, a young farm worker from St. Gilbert, P.E.I., with a lot more responsibility than I’ve ever experienced. He grew up fast and became a soldier. He is now 82.

My own son is 26. I cannot begin to imagine how I could ever send him off to fight in a war. Not that he is not a great person and very responsible, but because he is such a good kid and I never want to see him go through that experience. I remember Dad telling me about the morning he got on the train to leave for basic training. He told me it was the only time in his life he ever saw his father cry. I pray that my son never has to see that look in his own father’s eyes. I pray for the families of the servicemen and women who are now overseas in places such as Afghanistan. I am sure many of these young people have seen that look reflected in the eyes of their own loved ones.

World War II was long over before I was born. Dad went off to Europe before he had much of a chance to think about his own future or any children he might have one day. He went off to serve Canada, just like all the other soldiers, sailors and airmen who went overseas, and all the other servicemen and women who did their part by serving in Canada.

And while many of them don’t talk much about their experiences, I know that from their contributions we gained a safer place to raise our kids and our kid’s kids. Our war veterans have given us a future, and it is up to us to make the most of that time.

And so after all these years I don’t pretend to know what went through my dad’s mind on November 11. The fear, the unknown, the enemy. As someone who has never served my country in wartime I have no idea what it would be like. To try to imagine it would be just overwhelming. I do know that I can go to lunch with co-workers and not have to worry that they won’t make it back to the office. How many veterans remember the battles where the lunch guys didn’t make it back for supper?

And so we must continue to wear the poppy and take time to remember—and wonder what memories they must have. We must be there for them—our dads, mothers, brothers, sisters, uncles and countless others—at the 11th hour, of the 11th day, of the 11th month.

We need to show them that our support will never end because they earned it and deserve it.