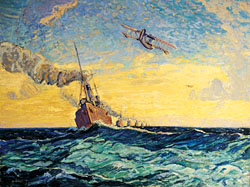 Prior to becoming famous as a founding member of the Group of Seven, Arthur Lismer sharpened his painting skills in Halifax during the last years of World War I. He had a brilliant summer palette, and produced oil paintings that perfectly captured sunny days on the Atlantic coast. Sparkling blues complement the zigzagging camouflage on troop carriers, while lemon and Naples yellow coat the sky. His lively paintings celebrate the ships—also known as “dazzle” ships—as they carry troops to and from the busy port.

Born in 1885 in Sheffield, England, he immigrated to Toronto in 1911. Lismer quickly became friends with a number of Canadian artists who embraced the landscapes of northern Ontario.

In 1916, Lismer was offered a job at the Victoria School of Art and Design in Halifax, later known as the Nova Scotia College of Art. His acceptance was prompted by the fact that fellow artists A.Y. Jackson and Lawren Harris had enlisted in WW I. However, Lismer’s new job was not quite what he bargained for. He ended up being both boss and staff, handling the jobs of publicist, principal and all the teaching. 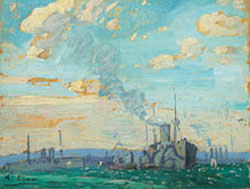 Two years later, the Canadian War Memorials Fund decided to include a Home Work Section in the Canadian War Records project. Lismer, who was offered a free hand to record military scenes around the port, jumped at the chance and spent the next year trying to reconcile his teaching responsibilities with his desire to paint.

Halifax prospered during the war because it was an important embarkation point for Canadian troops. Lismer was commissioned to produce three canvases and provide a set of 16 lithographs to the War Records Office. He was a wonderful draftsman. His sketches are confident and detailed, and wonderfully suited as lithographs. Simply put, lithography involves the artist illustrating directly on stone and then printing from that stone onto paper, creating a mirror image.

By 1919, Lismer felt the demands on his time and energy had reached their limit and so he decided to return to Toronto, where he accepted the post of vice-principal of the Ontario College of Art. While there he rekindled his associations with the artists who would soon become the Group of Seven. His contribution to Canadian art is enormous; his paintings and drawings from his years in Halifax are a dynamic record of the home front in WW I.