For most Canadians WW II began on Sept. 1, 1939, when Hitler’s armies invaded Poland. That event, coupled with the sinking of the passenger liner Athenia on Sept. 3, provided ordinary Canadians with all the incentive they needed and thousands rushed to enlist. The Canadian government was much more cautious. Prime Minister Mackenzie King had promised Parliament would decide Canada’s foreign policy so it was not until Sept. 10, after a brief debate, that Canada was officially, and very tentatively, at war.The government hoped it could avoid sending an expeditionary force overseas and had done as little as possible to prepare one. Last minute additions to defence estimates in 1939 provided $7.5 million for the Royal Canadian Air Force to buy aircraft, but less than one million dollars for the Canadian Army, none of it for equipment. The crisis atmosphere of late August led to a call-out of the militia, but the purpose was not to train or go into combat, but to guard canal locks, railway bridges and airports. On Sept. 1, the cabinet met to invoke the War Measures Act and authorize the expansion of the Army. The prime minister insisted that the name “field force” be changed to “active service force” and enlistment limited to service in Canada.

The Army ignored the implications of this decision and began recruiting an expeditionary force of two divisions plus all the ancillary troops necessary to re-create a Canadian corps, thus beginning the prolonged debate over the size and purpose of the Canadian Army.

In cabinet, King, and the majority of his colleagues, opposed every stage of the expansion of what they termed “The Big Army”; but they dared not express their opposition in public. The Army and its commander, Lieutenant-General A.G.L. McNaughton, were the primary symbols of the “nation-in-arms” and the prime minister knew that English-speaking Canadians would turn on any government that threatened their national army. After J.L. Ralston became minister of national defence in June 1940 the Army had a champion no one could easily challenge.

Success in forcing a reluctant government to authorize a two-division expeditionary force did not lead to any dramatic change in the military budget. There were not enough uniforms or boots, never mind weapons. When 1st Division left for the United Kingdom in December 1939, it was untrained and ill-equipped for war. The Bren light machine-guns of Canadian manufacture were not available, so apart from rifles, some obsolete artillery was all that Canada could provide its young men.

Once overseas, 1st Div. was equipped from British sources and realistic training began. At home 2nd Div. units spent the winter in overcrowded armories, empty factories or office buildings. The Canadian National Exhibition grounds in Toronto were requisitioned and those assigned to the Horse Palace were billeted four to a stall. As late as the summer of 1940, infantry battalions had only received enough mortars, anti-tank rifles, Bren guns, grenades, mines and radios to permit demonstrations. Artillery and armored units were in even worse shape. The best training done in 1940 was accomplished on the skating rinks, playing fields and gymnasiums. Team sports were not just a way of keeping men busy; organized on a platoon, company and battalion basis they provided the foundation for the teamwork essential in successful military organizations.

The Canadian government had done little to help its young men prepare for the challenges of modern war. Fortunately there was time to make up for years of neglect, and the raw material–the men who volunteered–was excellent. Canada’s servicemen were drawn from a generation that came of age during the Great Depression. This obvious fact has led to stories about an army drawn from the margins of society. The evidence suggests the contrary, more than 80 per cent left jobs to enlist. There was intense competition for places in most battalions and thousands of men were turned down because of age or ill health. Many more were returned to civilian life when X-rays and a new physical examination were instituted. There was no personal failing involved in being young and unemployed in the late ‘30s any more than there is today and it is time to put the old stereotype to rest.

1st Div. drew half its total strength from the regular army or militia, providing a head start that the other divisions might envy. Once in England 2nd Div. quickly caught up. In early 1942, General Bernard Montgomery, who was suspicious of all WW I veterans except himself, offered scathing criticism of Major-General George Pearkes VC, while praising Major-General “Ham” Roberts and 2nd Div. Montgomery’s views resulted in selection of 2nd Div. for the Dieppe raid so this was one competition 1st Div. was lucky to lose!

Montgomery’s survey of the Canadian Army in the first months of 1942 provides an important measure of what had been accomplished in the two years since mobilization. Dr. John A. English, a distinguished historian and former infantry officer, has used Montgomery’s reports to support his argument that the Canadian Army was badly led and poorly trained when it entered combat. His 1991 book, The Canadian Army and the Normandy Campaign: Study of Failure In High Command, is now in paperback. It should be read by all those with a serious interest in our military history, but it should be read critically. English never explains why the army that he thinks “failed” in Normandy did so well in Italy, nor does he explain the reasons for the Canadian victories in Northwest Europe.

Monty’s inspection offered comment on the strengths and weaknesses of British and Canadian units in light of the large training exercises that began in the summer of 1941. Before then Canadians had been committed to a coastal defence role with little opportunity to develop skills in large-scale manoeuvres. Reports on exercises Waterloo and Bumper criticized the mistakes made by British and Canadian formations. However, such exercises are supposed to be learning experiences. Indeed, Bumper was one of the turning points in the Commonwealth war effort because it led to the development of centralized control of artillery and the famous “Uncle” target where all guns in the division fired on a single target in response to a single command.

Such exercises were of vital importance to generals and staff officers but combat soldiers learned very little except that snafus–situation normal all fouled up–had to be accepted. Fortunately, battalion officers did not wait until the general staff got around to their needs. In the fall of 1941 the Canadian Army was introduced to battle drill. Veterans who recall battle drill training, with its emphasis on physical conditioning, field craft and elaborate obstacle courses, may find it hard to believe that it was initially rejected by British and Canadian senior officers. The first divisional battle school and a training manual were produced by 47th (London) Div. in the summer of 1941. Major-General J.E. Utterson-Kelso, who some described sarcastically as the “best platoon commander in the British army,” used an extensive training area to teach drills for fire and movement at the section, platoon and company level. He invited Lieutenant-Colonel Fred Scott, commanding officer of the Calgary Highlanders, to a demonstration in the fall of 1941. Scott was convinced this revolutionary system of training could refocus the energy and enthusiasm of his men. Calgary officers and non-commissioned officers were put through the 47th Div. course while a battle drill school was created. On Oct. 23, Captain John Campbell led a platoon through the new course at Burnt Wood, Bexhill, before an audience that included Col. J.L. Ralston, the minister of national defence, as well as McNaughton, corps commander Harry Crerar and Major-General Vick Odlum. In the weeks that followed, battle drill fever spread “like wildfire” through the Calgaries and the whole battalion passed through a two-week course. Visitors from other units came to see what was going on and left clasping a copy of the “Battle Drill Bible” that the Calgaries had copied from 47th Div.

Crerar was uncertain about how to react to this grassroots revolt. After a visit to Bexhill he thanked Scott for providing a “satisfactory number” of officers and NCOs in the “tactical and psychological advantages” of battle drill training but noted that, “with the invasion season not many weeks off”, schools and courses would have to be closed. Students were to return to their sub-units to “apply their knowledge.” Crerar did not, however, order the Calgaries to close their school immediately or to cease training other battalions. Roberts, who assumed command of 2nd Div. in early November, had authorized two other demonstration days to which all Canadian units were invited. And the British army announced that Utterson-Kelso was to take charge of the infantry-training directorate while his chief battle drill instructor took charge of a new headquarters battle school at Barnard Castle in Yorkshire. The British also authorized the formation of battle schools in each division.

McNaughton and Crerar soon followed the British lead. Scott had been ordered to return to Canada to run a course for “senior officers” at the Royal Military College in Kingston, Ont., but in May he was placed in charge of The Canadian Battle Drill School in Vernon, B.C. In England a Battle Drill Wing was added to the Canadian Training School with Campbell of the Calgaries in command.

Utterson-Kelso and Scott had transformed the training procedures of the British and Canadian armies at the platoon and company level, but what was to be done about preparing for a return to the continent?

Practice in small unit tactics would help men to survive and win in certain phases of a battle but the Anglo-Canadian armies would also need new dimensions of fire support and a well thought-out battle doctrine for divisions and corps if they were to take on the German army. Both requirements were utterly lacking in 1942.

This was the gist of Montgomery’s criticism of both British and Canadian divisions in 1942. After watching the Canadian formations in Exercise Beaver, April 1942, he wrote: “1st Div. has very fine material and should be a first-class division. But it was very badly handled on this exercise and, in consequence, failed badly.

“Pearkes is unable to appreciate the essentials of a military problem and to formulate a sound plan. His mind works in a groove and he gets the bit between his teeth, puts on blinkers, and drives ahead blindly. He is a gallant soldier without doubt; but he has no brains. There is good material to hand. Salmon would command a division well. Mann and Snow would make good brigadiers.

“I would put Roberts down as the best divisional commander in the corps. He is very sound, but he is not any way brilliant… I watched 2nd Div. carefully and there is no doubt that Church (C.C.) Mann is a very big influence in that division.

“As a result of this exercise, 2nd Div. has gained a high morale, and we want the show to crack along now, to make progress, and not to become unsettled.”

Montgomery’s evaluation of brigade and battalion officers helped McNaughton and Crerar decide necessary changes though in many cases it was simply a matter of replacing officers considered too old for active service. Montgomery also identified a number of outstanding Canadian officers who were promoted in the course of 1942 and 1943. A great deal remained to be done before the citizen army was ready to confront the Germans but much had been accomplished by the summer of 1942.

RCL members and their families can benefit from exclusive discounts on car, home, condo and tenant’s insurance @belairdirect. Learn more at https://t.co/0MtZF9USYv 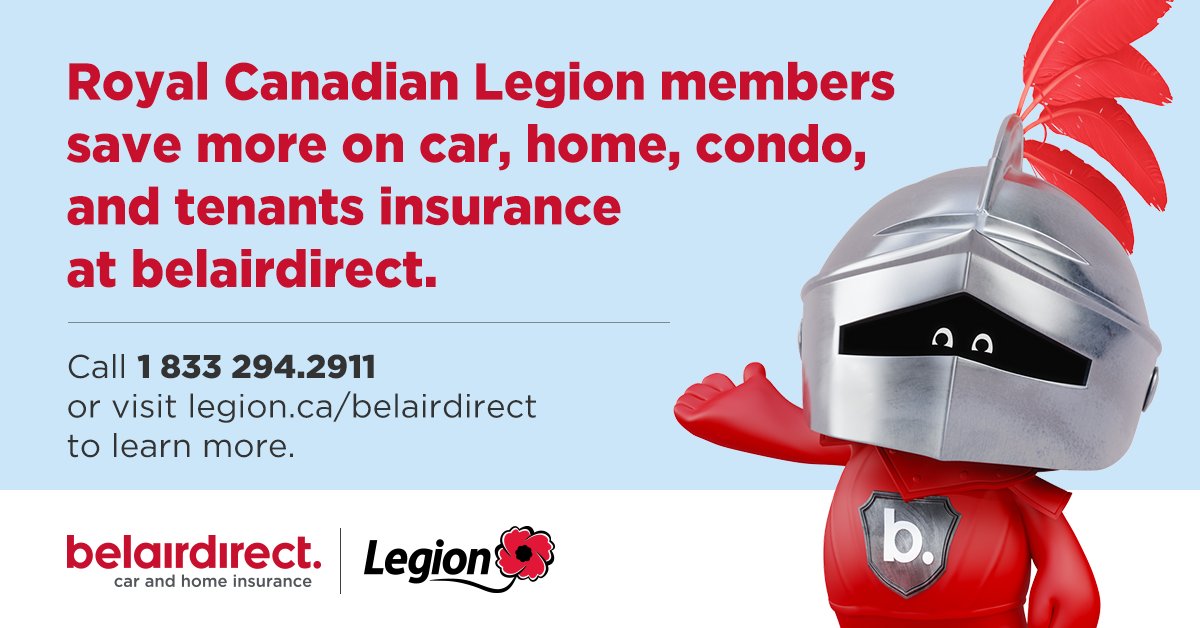